You are here: Home › law › Hermann Conring and the Science of German Legal History 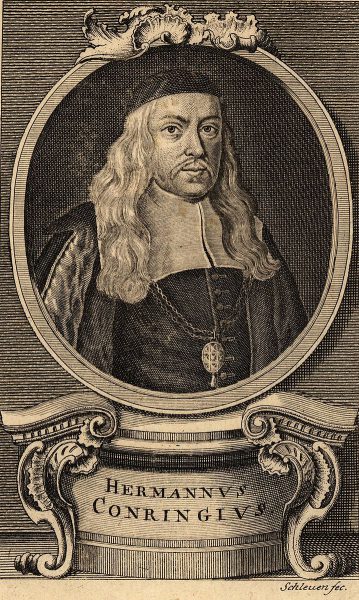 On November 9, 1606, German intellectual Hermann Conring was born. Conring made significant contributions to the study of medicine, politics and law. Conring was polyhistor and Reichspublizist, as well as medical doctor and personal physician of Queen Christina of Sweden, Danish State Councillor and director of the Bremen-verdische Archive in Stade. He is regarded as the founder of the science of German legal history. In addition, Conring also conducted research in the fields of philosophy, physics and medicine.

Hermann Conring was born into a family of ministers in a town in East Frisia, a territory ruled at that time by the counts of Cirksena, which would later become Germany. Early, he became familiar with the Latin language and ancient classical writings. In 1623 Conring had to return to the north at the request of his parents due to the effects of the Thirty Years’ War. One year later he returned briefly to the university, but due to a plague epidemic in 1625 he already made his way back to his parents’ house. At the University of Helmstedt, Conring studied philosophy starting at the age of only 14. In 1625, Hermann Conring followed an invitation by Matthias van Overbeck to study at Leiden University. There, he developed his interest in science and medicine. From 1634 he turned therefore to medicine, since it was better to earn money here, was awarded a doctorate in medicine on 29 July 1634 and shortly thereafter, with a thesis on scurvy, also acquired the doctorate.

Thereafter, Conring taught the son of Arnold Engelbrecht, at that time chancellor of the Principality of Braunschweig-Wolfenbüttel. Around 1632, Hermann Conring was appointed professor of philosophy and rhetoric at the University of Helmstedt. It is believed that around 1660, Conring began to lecture statistics as a forerunner of modern government statistics. But the topic he taught was political science. Now he was interested, among other things, in the teachings of Joachim Hopper and Niccolò Machiavelli and began to write a comparative study of states in which he examined the historical development of various states, but which never came to an end.[4]  In his “Dissertatio de optima principo” of 1652, he postulated the novel idea that, on the basis of the respective history and psychology of a people, there could be different forms of state and government suitable for different states. This preoccupation with the history of peoples led to a reflection on the pre-state period of a state of nature, which was also the subject of more influential contemporary philosophers of state such as Thomas Hobbes and John Locke.[5,6]

The approaches he developed in the field of natural philosophy can always be traced back to Aristotle. Based on this, he always advocated polyhistorism in his lectures. During his teaching activity in the field of medicine he gave an extensive textbook entitled Introductio in universam artem mediciam singulasque eies partes (Introduction to the whole of medicine and its individual parts). Here, too, we find the approaches already advocated by Aristotle. Conring also dealt with William Harvey‘s teaching on blood circulation.[3] In his lectures on the fundamentals of medicine, he attached great importance to practical experiments, although it was often extremely difficult to obtain corpses suitable for anatomy lectures. In addition to his work in medical research and practice, Conring was also a personal physician at various European ruling houses.

The Father of Legal History

Hermann Conring is regarded as the father of German legal history. It is believed that already at Leiden University, he developed a great interest in the topic and began to research into the development of German law. In 1643, he started to get involved with the constitutional law of the German Reich which he also reflected in his lectures in the years after. In his major publication De origine iuris Germanici from 1943, Conring refuted the Lotharian legend and proved that there is no legislative act of Emperor Lothar III of Supplinburg, who made Roman law into imperial law.

One of the last German Universal Scholars

Hermann Conring was one of the last German universal scholars. He is regarded as the founder of the science of legal history. He supported the famous Wolfenbüttel library, today’s Herzog August Bibliothek, with expert opinions and advice. In his honour, the oriental field cabbage bears the scientific name Conringia orientalis. The Latin inscription on his tombstone, which stands on a manor in Gross Twülpstedt (his coffin is in the tomb of the church of St. Mary St. Cyriacus there), translates as follows:

“In this hill is decided the adviser of kings and princes, doctor of public international law, connoisseur of all philosophy, practical and theoretical, an excellent philologist, speaker, poet, historian, physician, theologian. You think many are buried here? It is one: Hermann Conring, the miracle of the century.”