You are here: Home › chemistry › Irving Langmuir and his scientific achievements 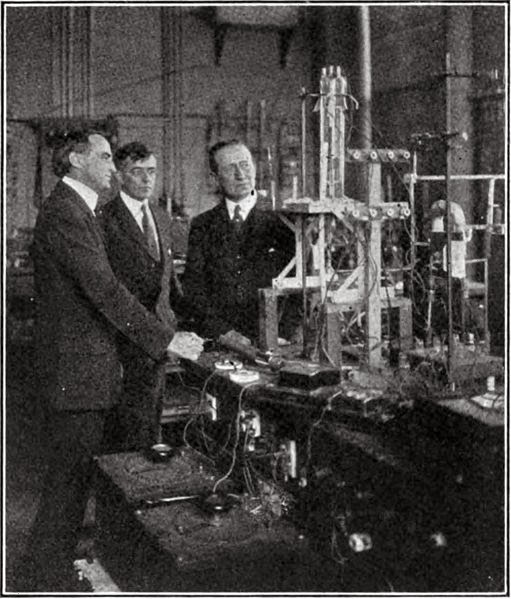 On January 31, 1881, American chemist and physicist Irving Langmuir was born. Langmuir advanced several basic fields of physics and chemistry, invented the gas-filled incandescent lamp, the hydrogen welding technique, and was awarded the 1932 Nobel Prize in Chemistry for his work in surface chemistry.

“To me, [it’s] extremely interesting that men, perfectly honest, enthusiastic over their work, can so completely fool themselves.”
— Irving Langmuir, 1953 [9]

Irving Langmuir was highly influenced by his older brother Arthur, who was a research chemist and helped his little brother set up a chemistry lab in his childhood bedroom. However, the young Irving Langmuir was not only interested in science, but also enjoyed many outdoor activities, such as skiing, hiking, or piloting his own plane. He was well educated and supported by his family, who also taught him to question the environment and nature around him. Langmuir attended schools in the United States and Paris, and attended several private schools. He earned his Ph.D. degree in 1906 with a doctoral thesis ‘On the Partial Recombination of Dissolved Gases During Cooling‘.

During his postgraduate period, Langmuir mainly devoted his research to chemistry and taught at Stevens Institute of Technology in Hoboken, New Jersey. To one of his first major contributions to science belongs the improvement of the diffusion pump, which led to the invention of the high-vacuum rectifier and amplifier tubes. Also, he discovered along with the American quantum physicist Lewi Tonks that the lifetime of a tungsten filament could be greatly lengthened by filling the bulb with an inert gas, like argon. Furthermore, the scientist made significant contributions to the development of the incandescent light bulb.

Langmuir’s work on surface chemistry started with his finding, that molecular hydrogen introduced into a tungsten-filament bulb dissociated into atomic hydrogen and formed a layer one atom thick on the surface of the bulb. The curious scientist continued studying filament in various gas areas and vacuum. Langmuir began studying thermionic emission, the emission of charged particles from hot filaments and he became one of the very first scientists to work with plasmas. Along with his befriended physicist Tonks, he discovered what is know widely known as Langmuir waves. Langmuir waves are understood as rapid oscillations of the electron density in plasmas or metals.

The basis for his Nobel Prize nomination in the field of chemistry was laid in 1917 with Langmuir’s publication of a paper on the chemistry of oil films. In it, he theorized that oils consisting of an aliphatic chain with a hydrophilic end group were oriented as a film one molecule thick upon the surface of water, with the hydrophilic group down in the water and the hydrophobic chains clumped together on the surface. Moreover, the thickness of the film could be easily determined from the known volume and area of the oil. This made a further investigation of the molecular configuration possible, before spectroscopic techniques were even available. In 1924, Langmuir scientifically introduced the idea of electron temperature and invented the Langmuir probe. It is a diagnostic method for measuring density as well as the temperature and is on this day mostly used in plasma physics.

In his later years of research, Langmuir’s interests headed toward atmospheric sciences and discovered a wind-driven circulation in the sea, which is today mostly known as the Langmuir circulation. During World War II, Langmuir worked on improving naval sonar for submarine detection, and later to develop protective smoke screens and methods for deicing aircraft wings. In 1953 Langmuir coined the term “pathological science“, describing research conducted with accordance to the scientific method, but tainted by unconscious bias or subjective effects. This is in contrast to pseudoscience, which has no pretense of following the scientific method. In his original speech, he presented ESP and flying saucers as examples of pathological science; since then, the label has been applied to polywater and cold fusion. After a short illness, Irving Langmuir died in Woods Hole, Massachusetts from a heart attack on August 16, 1957.