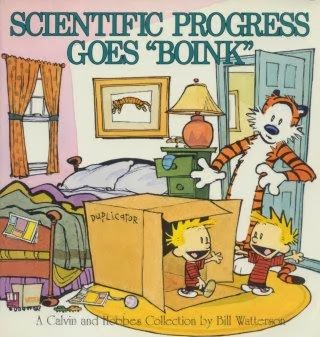 On November 18, 1985, the first Calvin and Hobbes daily comic strip was published, the humorous antics of Calvin, a precocious and adventurous six-year-old boy, and Hobbes, his sardonic stuffed tiger by American cartoonist Bill Watterson. Ok, you might ask, what does a daily cartoon comic strip have to do with the history of science and technology. Well, we have included Calvin and Hobbes into our daily blog for several reasons: First, the reference for John Calvin and Thomas Hobbes and their philosophic differences that have been expressed in a wonderful and very peculiar way. Second, some of the cartoons do really relate to science and technology – let’s not forget about transmogrification -, and third, there is of course also a personal story that I’m going to tell you today…

John Calvin was an influential French theologian and pastor during the Protestant Reformation in the 16th century. Originally trained as a humanist lawyer, he broke with the Roman Catholic Church around 1530 and fled to Geneva, Switzerland to help reform the church in Geneva. But, the Geneva city council resisted the implementation of Calvin’s strict ideas and he was expelled. Calvin was a tireless polemic and apologetic writer who generated much controversy. Strongly influenced by the Augustinian tradition,[6] he expounded the doctrine of predestination and the absolute sovereignty of God in salvation of the human soul from death and eternal damnation. Thomas Hobbes on the other hand, was an English philosopher of the 17th century, best known today for his work on political philosophy.[4] His 1651 book Leviathan established the foundation for most of Western political philosophy from the perspective of social contract theory. As a founder of modern political philosophy, he developed some of the fundamentals of European liberal thought: the right of the individual; the natural equality of all men; the artificial character of the political order ; the view that all legitimate political power must be “representative” and based on the consent of the people; What if both of these extraordinary characters were put together into everyday situations of today? 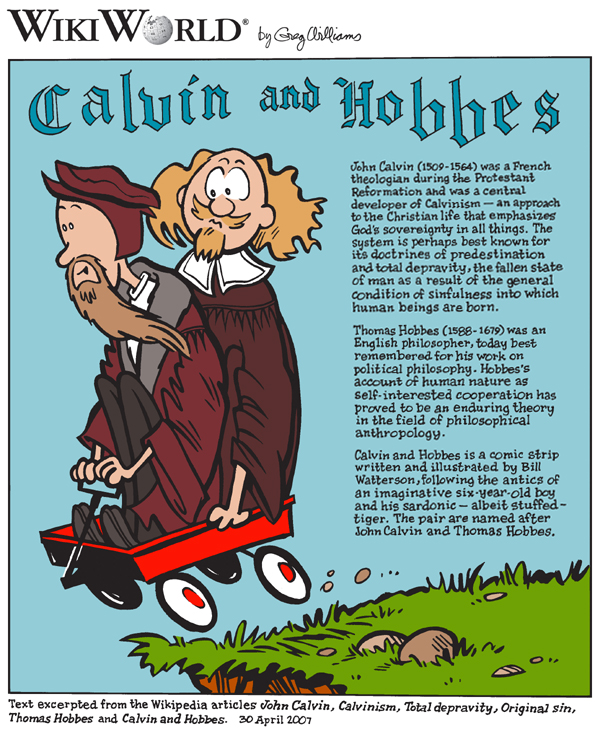 WikiWorld comic based on articles about John Calvin, Thomas Hobbes and the Calvin and Hobbes comic strip.

Well, Bill Watterson stated once that Calvin is named for “a 16th-century theologian who believed in predestination,” and Hobbes for “a 17th-century philosopher with a dim view of human nature.” But, besides putting these two strong characters together, he came up with the idea to put his main characters into an mischievous six-year-old boy named Calvin and an anthropomorphic stuffed tiger named Hobbes, who only came to life when the story is told from Calvin’s viewpoint. Other people only see the stuffed tiger, while for Calvin, Hobbes is a real character. Calvin and Hobbes is set in the contemporary United States in an unspecified suburban area. Calvin demonstrates his intelligence through his sophisticated vocabulary and a philosophical mind. The great thing about Calvin and Hobbes is that, as a child you probably love some of the physical humor going on there, but then as an adult you can catch on to more of the discussion. This might be one of the reasons why Calvin and Hobbes is just so timeless and still appeals to people. Calvin and Hobbes’ relationship is by turns playful, combative, thoughtful and fantastical; they act and sound like real best friends. But they do things that most kids can only dream of – they time travel, dig for dinosaur bones in the backyard and build legions of abominable snowmen.

Bill Watterson stopped drawing Calvin and Hobbes at the end of 1995 with a short statement to newspaper editors and his readers that he felt he had achieved all he could in the medium. At the height of its popularity, Calvin and Hobbes was featured in over 2,400 newspapers worldwide; as of January 2010, reruns of the strip still appear in more than 50 countries. Nearly 45 million copies of the 18 Calvin and Hobbes books have been sold. Still, the magic of a boy and his imaginary friend never really left fans’ hearts. Another thing that makes Calvin and Hobbes so unique is also Watterson’s refusal to sell out. Thus, the strip’s authenticity is secured and as Watterson has declared once, he didn’t become a for the attention, the accolades or the money. He just wanted to create the best comic strip possible.

“[W]e seem to have forgotten that a comic strip can be something more than a launch pad for a glut of derivative products. When the comic strip is not exploited, the medium can be a vehicle for beautiful artwork and serious, intelligent expression.” (Bill Watterson)

Finally, I also want to tell you about my personal story that relates me to Calvin and Hobbes. Back in the 1990s when I was working on my Ph.D. in theoretical computer science, a fellow PhD-student once sent me a link to one of the daily Calvin and Hobbes strips. I was immediately infected because it was so different compared to other comic strips I knew. On the one hand, profound truths and philosophical arguments were transported in some quintessential 3-6 picture frames and a few lines of dialogue. On the other hand, the story with the imaginary (tiger) friend also offered a serious option for identification – despite already being a grown-up. It was kind of a childhood nostalgia, when summer days seemed endless, stuffed with adventures, and you possessed all the time of the world, while in real life we were working day and night on algorithms, publications, and teaching. 😉