You are here: Home › literature › James Joyce and Literary Modernism 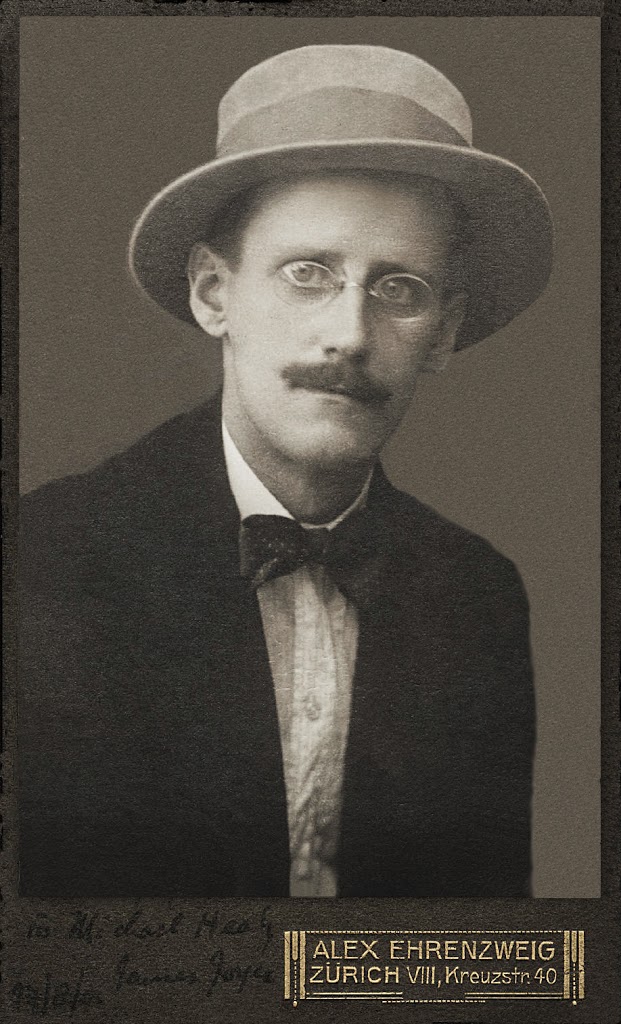 On February 2, 1882, Irish novelist and poet James Joyce was born, who is considered to be one of the most influential writers in the modernist avant-garde of the early 20th century. Joyce is best known for his Ulysses, a landmark work in which the episodes of Homer‘s Odyssey are paralleled in an array of contrasting literary styles.

“Stately, plump Buck Mulligan came from the stairhead, bearing a bowl of lather on which a mirror and a razor lay crossed. A yellow dressinggown, ungirdled, was sustained gently behind him on the mild morning air.”
— James Joyce, Ulysses, First lines, Ch. 1: Telemachus

James Augustine Aloysius Joyce on February 2, 1882 just south of Dublin in a wealthy suburb called Rathgar, as the eldest of ten children to the impoverished gentleman John Stanislaus Joyce and his wife Marry Murray Joyce. Although being a talented singer his father, who liked to drink and didn’t give enough attention to the family finances, wasn’t able to provide a stable a household. In spite of their poverty, the family struggled to maintain a solid middle-class facade. From an early age, James Joyce showed as well exceeding intelligence as also a special gift for writing and a passion for literature. He was able to read Henrik Ibsen‘s plays in the original Norwegian language and spent his free time with classical authors such as Dante, Aristotle, or Thomas Aquinas. Largely educated by Jesuits, Joyce attended the Irish schools of Clongowes Wood College and Belvedere College before he studied at University College Dublin, where he earned a Bachelor of Arts degree with a focus on modern languages.

A Journalist in Paris

After graduation in 1902 the twenty-year-old Joyce went to Paris, where he worked as a journalist, teacher and in other occupations often under difficult financial conditions. Originally, Joyce planned on studying medicine. Unfortunately, the lectures were conducted in a technical French that Joyce’s education had not prepared him for. He spent a year in France, returning when a telegram arrived saying his mother was dying. Not long after her death, Joyce was travelling again. But many critics believe that his life spent in Dublin provided the fuel for all of his later creative endeavors.

He left Dublin in 1904 with Nora Barnacle, a chambermaid who he married more than 25 years later in 1931. The young couple was planning to move to Zurich relying on a false promise of employment at the Berlitz Language School. Finally, the director at the Berlitz School at Trieste was able to intervene and was finally able to provide James Joyce a teaching position in Trieste that he would keep for almost decade. Nevertheless, Joyce continued to drink and borrow money from his younger brother, Stanislaus Joyce, at this time. Both Nora and Stanislaus remained as protective, supporting figures for the duration of the writer’s life.

“Poetry, even when apparently most fantastic, is always a revolt against artifice, a revolt, in a sense, against actuality. “
— James Joyce,  a lecture on Mangan delivered at the Literary and Historical Society, University College, Dublin, 1902

In 1914, Dubliners was published. The fifteen stories in this collection already written in 1905 were structured in a standard way. However, the language and atmosphere that Joyce used presaged his later more innovated works. Joyce’s next major work, A Portrait of the Artist as a Young Man, appeared in serialized form in 1914 and 1915, before Joyce was “discovered” by Ezra Pound.

Ulysses – a Key Piece of Modernism

In the same year Joyce already began the writing process for Ulysses. This novel relates the events of Dublin on June 16, 1904, which is also referred to as “Bloomsday“. This date was personally significant since it was the date Joyce first took his wife. In Ulysses, Joyce employs stream of consciousness, parody, jokes, and virtually every other literary technique to present his characters. An element of chance pervades the book as the point of view shifts between hundreds of citizens of Dublin. However, Joyce has orchestrated the many desperate voices in his book. T.S. Eliot expressed that the structure was based on the Odyssey as Joyce also confirmed [1]. When Ulysses was published in Paris in 1922 by Sylvia Beach‘s famous bookstore ‘Shakespeare and Company‘, many immediately hailed the work as genius. With his inventive narrative style and engagement with multiple philosophical themes, Joyce had established himself as a leading Modernist. With the appearance of both Ulysses and T. S. Eliot’s poem, The Waste Land, 1922 was a key year in the history of English-language literary modernism. 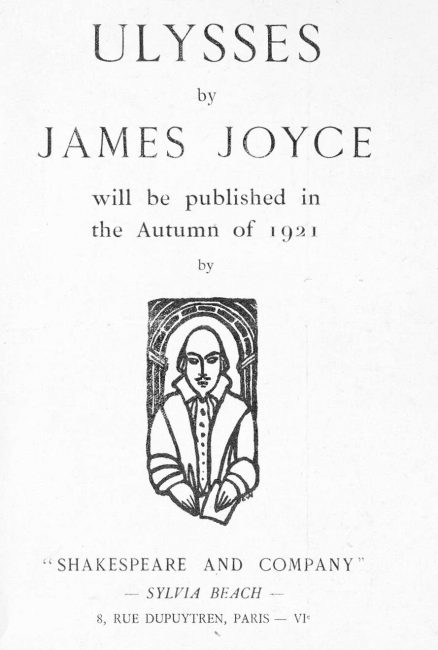 Announcement of the initial publication of Ulysses.

Ulysses consists of 18 chapters, each covering roughly one hour of the day, beginning around about 8 a.m. and ending sometime after 2 a.m. the following morning. Each of the 18 chapters of the novel employs its own literary style. Each chapter also refers to a specific episode in Homer’s Odyssey and has a specific colour, art or science and bodily organ associated with it. This combination of kaleidoscopic writing with an extreme formal, schematic structure represents one of the book’s major contributions to the development of 20th century modernist literature.

Midway through his writing on Ulysses, Joyce suffered the first of many eye operations to salvage his ever-worsening eyesight. He was treated by Dr Louis Borsch in Paris, undergoing nine operations before Borsch’s death in 1929. Throughout the 1930s Joyce travelled frequently to Switzerland for eye surgeries and also for treatments for his daughter Lucia, who, according to the Joyces, suffered from schizophrenia. Lucia was analyzed by Carl Jung at the time, who after reading Ulysses is said to have concluded that her father had schizophrenia.[2] Jung said that she and her father were two people heading to the bottom of a river, except that Joyce was diving and Lucia was sinking.

However, the Ulysses was banned from both the United Kingdom as well as the United States on obscenity charges. It was not until 1934, that Random House won a court battle that granted permission to print and distribute Joyce’s Ulysses in the United States; two years later, the novel was also legalized in Britain.

“All things are inconstant except the faith in the soul, which changes all things and fills their inconstancy with light, but though I seem to be driven out of my country as a misbeliever I have found no man yet with a faith like mine.”
— James Joyce, Letter to Augusta Gregory (22 November 1902),

James Joyce started working on his second major work “Finnegan’s Wake” in 1923. In April 1924, the first section of the novel was published. The final version appeared in 1939 but there was mixed reaction to this work. Considered to be far more baffling and convoluted than Ulysses, Finnegan’s Wake was a critical failure, alienating Joyce from many of his former admirers. Joyce’s method of stream of consciousness, literary allusions and free dream associations was pushed to the limit in Finnegans Wake, which abandoned all conventions of plot and character construction and is written in a peculiar and obscure English, based mainly on complex multi-level puns. This approach is similar to, but far more extensive than that used by Lewis Carroll in Jabberwocky.[3]

In the course of World War II, Joyce was forced to leave Paris and finally moved to Switzerland. On January 13, 1941, James Joyce died of a stomach ulcer at the age of 58, and was buried in Zurich’s Fluntern Cemetery.