You are here: Home › architecture › Herostratus burning down one of the Seven Wonders of the World 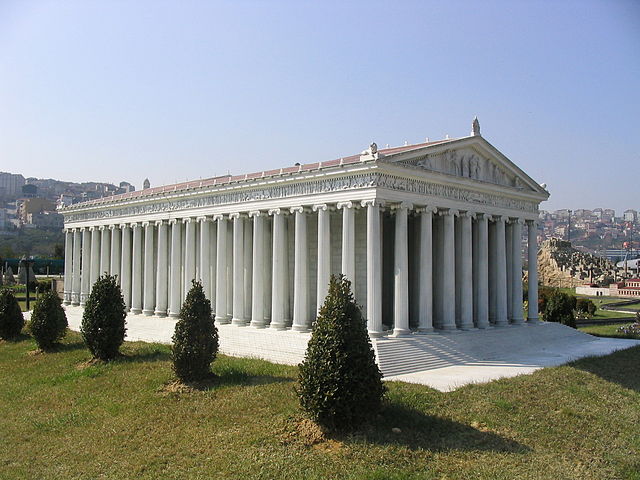 This model of the Temple of Artemis, at Miniatürk Park, Istanbul, Turkey, attempts to recreate the probable appearance of the first temple

On July 21, 356 BC, Herostratus, in an attempt to immortalise his name, set fire to the to the wooden roof-beams of the Temple of Artemis, one of the Seven Wonders of the Ancient World. For this outrage, the Ephesians sentenced Herostratus to death and forbade anyone from mentioning his name. Eversince this time, the term “Herostratic fame” relates to Herostratus and means, roughly, “fame at any cost”.

The Temple of Artemis

Modern archaeologist found that three successive temple buildings took place at the location where the Temple of Artemis was built. Apparently, the site was occupied as early as the Bronze Age and also some pottery finds were made that extend forward to Middle Geometric times. A peripteral temple with a floor of hard-packed clay was constructed in the second half of the 8th century BC and was probably destroyed by a flood.

A Temple Entirely of Marble

The new Temple of Artemis at Ephesus was designed by the architect Chersiphron and erected at the expense of Croesus. It was the first temple to be entirely of marble and supposedly represented one of the largest Greek temples ever built. According to Pliny, the temple had 127 columns, and 36 of them were carved with reliefs, one of them by Scopas, who also worked on the Mausoleum at Halicarnassus. It is believed that the temple took about 120 years to complete even though some sources state that the construction took even longer. The temple was about 115m long and 46m wide and soon became an important attraction, visited by merchants, and kings who paid homage to Artemis in the form of jewellery and goods. Unfortunately, shortly after its completion in 356 BC, the temple was destroyed by Herostratus. Apparently, he set fire to the wooden roof-beams, in order to seek fame – at any cost. The famous Temple of Artemis as one of the Seven Wonders of the Ancient World was destroyed, Herostratus was sentenced with death penalty, and the Ephesians forbade anyone from mentioning his name.

In spite of the decreed damnatio memoriae, the contemporary historian Theopompus of Chios passed on the deed and the name of Herostratos in his work, so that he achieved his goal and his deed has remained unforgotten to this day. Centuries later, Strabo, whose important sources included Theopompus, Aelianus and Solinus mentioned the name. The temple’s destruction coincided with the birth of Alexander the Great and it is believed that Plutarch later remarked that Artemis was too preoccupied with Alexander’s delivery to save her burning temple. The name Herostratos became synonymous with a person who destroys cultural assets or commits other irrational acts out of a craving for recognition. Accordingly, Herostratos is a person who commits misdeeds just to become famous.

Alexander offered to pay for the temple rebuilding, however, the Ephesians refused and eventually rebuilt it themselves. The third temple was even larger than the second and survived for about 600 years until it was destroyed in a raid by the Goths. Even though it remains unclear if the temple had ever been rebuilt another time, some of the columns were probably used in Hagia Sophia [4] and the Parastaseis syntomoi chronikai records that several statues and other decorative elements from the temple were re-used throughout Constantinople.