You are here: Home › philosophy › The World is in Ever-Present Change – Heraclitus of Ephesus 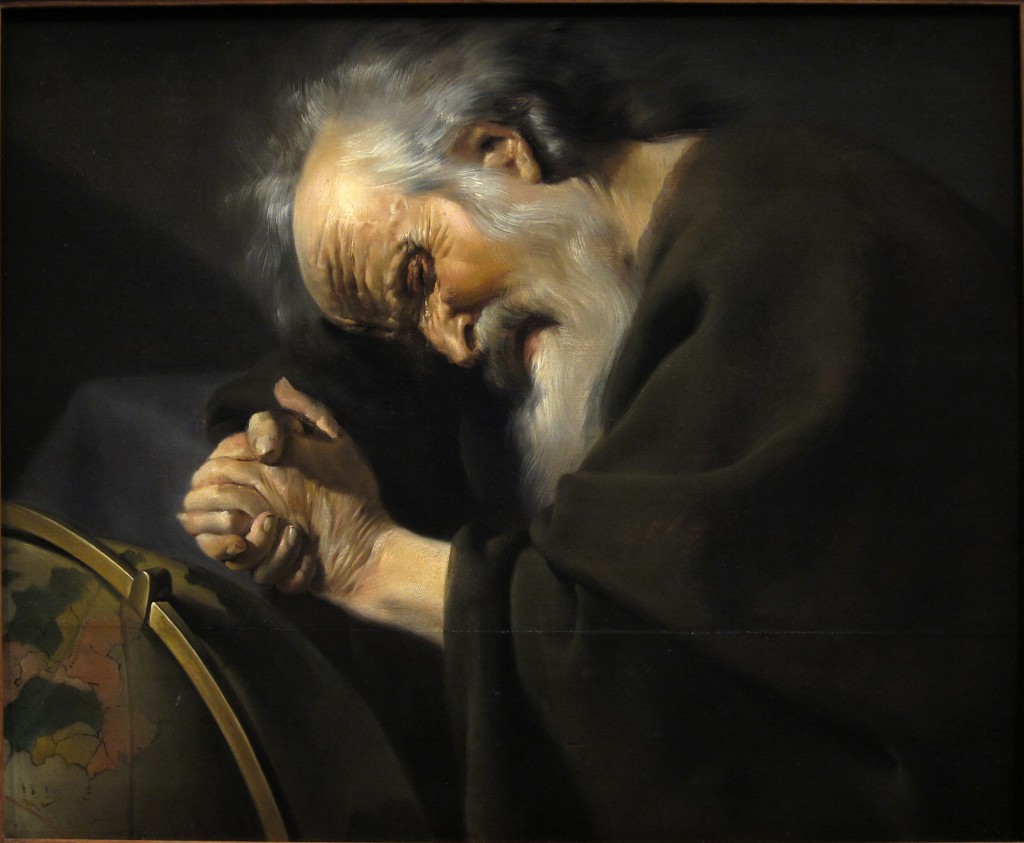 Greek pre-Socratic philosopher Heraclitus of Ephesus was famous for his insistence on ever-present change in the universe, as stated in the famous saying, “No man ever steps in the same river twice“. This position was complemented by his stark commitment to a unity of opposites in the world, stating that “the path up and down are one and the same”. Through these doctrines Heraclitus characterized all existing entities by pairs of contrary properties, whereby no entity may ever occupy a single state at a single time.

No Man ever steps in the same River twice

Like for many of the people of early antiquity, little is known about Heraclite’s life for certain. The main source about his life is Diogenes Laërtius, although some have questioned the validity of his account as obviously fabricated on the basis of statements in the preserved fragments. Heraclitus was born to an aristocratic family in Ephesus, Anatolia, in what is now called present-day Efes, Turkey. Ephesus had been part of the Persian Empire and was ruled by a satrap. As a youngster, Heraclitus used to play knucklebones with other youths in a temple and considered kingship duties a burden. He abdicated the throne in favor of his brother. According to Diogenes, Heraclitus was a hearer of Xenophanes though Heraclitus himself claimed to be self-taught. Diogenes relates that Heraclitus had a poor opinion of human affairs. Heraclitus’ life as a philosopher was interrupted by dropsy. The physicians he consulted were unable to prescribe a cure. He treated himself with a liniment of cow manure and baking in the sun, believing that this method would remove the fluid. After a day of treatment he died and was interred in the marketplace.

Heraclitus is the first Greek philosopher to emerge as a personality. His style is unique, and he seems determined to tease his hearers with difficult challenges to their understanding, accompanied by caustic remarks about their lack of intelligence.[4] Later in antiquity, Heraclitus was characterized as “the Obscure” and also as the “Weeping Philosopher“. By the time of Cicero he had become “the dark” because he had spoken “too obscurely” concerning nature and had done so deliberately in order to be misunderstood.[6]

Logos as the World’s Rationale

The writing of Heraclitus was the first place where the word logos was given special attention in ancient Greek philosophy. Heraclitus argued that there was an objective truth about everything, an underlying current flowing across a time, and on to the next one. This constancy he called Logos, which was not a personal subjective thought of his, rather, he thought of himself as merely conduit of it. Logos, for Heraclitus, was the world’s rationale, its determining formula. What logos means here is not certain: it may mean ‘reason’ or ‘explanation’ in the sense of an objective cosmic law; or it may signify nothing more than ‘saying’ or ‘wisdom’. Yet, an independent existence of a universal logos was clearly suggested by Heraclitus.

Heraclitus’ famous phrase that ‘you can’t step in the same river twice’ should be understood as the claim that things which seem to have a stable identity, in fact depend upon a continual interchange or succession of their constitutive parts, or outright antagonistic forces, for their identity. The statement that ‘all things are one’, has two particular consequences: first, from a divine perspective, the contrary evaluations accorded to sets of opposites are transcended, and second, that human discrimination between pairs of opposites are ultimately arbitrary. [1]

Though he was primarily concerned with explanations of the world around him, Heraclitus also stressed the need for people to live together in social harmony. He complained that most people failed to comprehend the logos, the universal principle through which all things are interrelated and all natural events occur, and thus lived like dreamers with a false view of the world. A significant manifestation of the logos, Heraclitus claimed, is the underlying connection between opposites.[2]

All Things are in Flux

Aristotle says in his Metaphysics that Cratylus criticized his master Heraclitus for saying that it is not possible to step twice into the same river: Cratylus thought it was impossible even once. Ancient writers took this argument to refer to a doctrine that all things are in flux and unknowable.[4]

Viewing fire as the essential material uniting all things, Heraclitus wrote that the world order is an “ever-living fire kindling in measures and being extinguished in measures.” He extended the manifestations of fire to include not only fuel, flame, and smoke but also the ether in the upper atmosphere. Part of that air, or pure fire, “turns to” ocean, presumably as rain, and part of the ocean turns to earth. Simultaneously, equal masses of earth and sea everywhere are returning to the respective aspects of sea and fire. The resulting dynamic equilibrium maintains an orderly balance in the world.[2]

Heraclitus’ work does not survive as a continuous whole. What we have instead is a collection of more than 100 independent sentences, most of which are ad hoc citations by authors from the period AD 100–300. Plato and Aristotle rarely cite Heraclitus directly, but their interpretations of him, which are influenced in part by their own preconceptions, shaped the ancient tradition of Heraclitus as exponent of universal flux and of fire as the primary material. [3]