You are here: Home › engineering › Henry Steinway and the Overstrung Iron-Frame Grand Piano 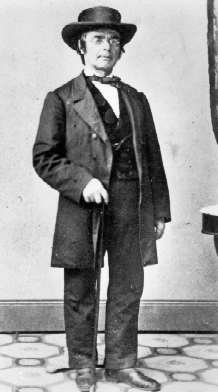 On February 15, 1797, German-born American inventor and entrepreneur Henry Steinway was born. He invented the overstrung iron-frame grand piano (1859) and is founder of the piano company Steinway & Sons.

Steinway was born Heinrich Engelhard Steinweg in Wolfshagen im Harz, Duchy of Brunswick in the Holy Roman Empire of the German Nation (modern Germany). His childhood was marked by many tragedies and twists of fate. He attended the common schools of his home town. Several brothers were killed during the Napoleonic War and Steinway lost his father and remaining brother at age 15. As an orphan he was now thrown upon his own resources. In 1814 he joined the Schwarze Schar, the volunteer corps of Frederick William, Duke of Brunswick-Wolfenbüttel in the war against Napoleon’s occupation of parts of Germany but remained in the garrison throughout the Napoleonic War campaign of the Hundred Days in 1815. He left service on 23 June 1822 and began to work as a carpenter, and later he became an apprentice to an organ builder in the town of Goslar. Although he had no musical training, he displayed a talent in building musical instruments. The first instrument he built was a zither.[1] He soon discovered his love for music and learned how to play the organ, and became a church organist.

Henry Steinway started building instruments, though hidden in the kitchen of his house because of the strong rules of the guild. In Braunschweig, he started by building guitars and zithers, and then graduated to pianos, of small proportions initially and gradually increasing in size. Then, in 1835 he made the first square piano, which he presented to his bride Juliane as a wedding gift. They later had seven children. In 1836 he built his first grand piano in his kitchen in the town of Seesen. This piano was later named the “kitchen piano“.

Because of the unstable political climate following the revolutions of 1848 in the German states, Steinweg decided to leave his hometown Braunschweig to emigrate to New York City in 1850 with five of his sons. There, he anglicized his name to Henry E. Steinway upon advice from friends, who concluded that the German surname Steinweg would be disadvantageous for doing business. Steinway and his sons worked for other piano companies until they could establish their own production under the name of Steinway & Sons in 1853. The first factory was located at 81 Walker Street, in Manhattan. A new factory was founded in 1859 at Park Avenue and 53rd Street, the present site of the Seagrams Building, where it covered a whole block. All the children, with the exception of Christian Friedrich Theodor, who had remained in Germany, worked in the business.[1] 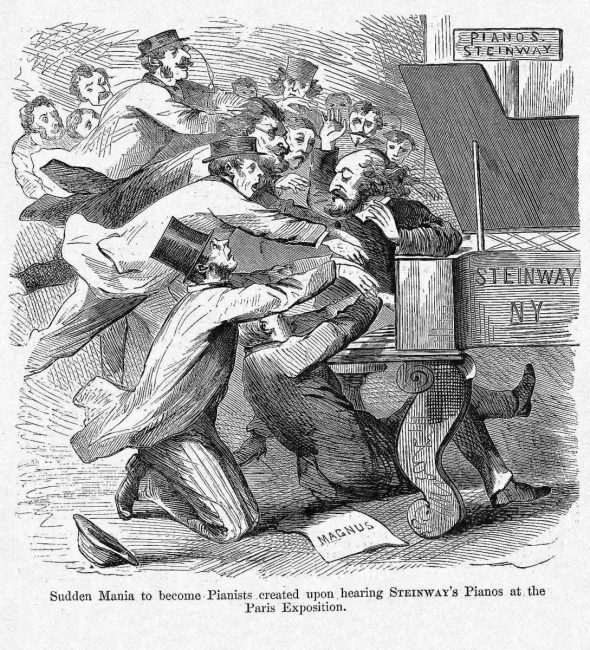 “Sudden Mania to become Pianists created upon hearing Steinway’s Pianos at the Paris Exposition.” This lithograph by Amédée de Noé a.k.a. Cham conveys the popularity of the Steinway piano, the musicality of which had just been demonstrated by pianist Désiré Magnus at the 1867 Exposition Universelle in Paris. (Harper’s Weekly, August 10, 1867, reporting on the world exposition)

The overstrung scale in a square piano earned the Steinway Piano first prize at the New York Industrial Fair of 1855. According to Franz Liszt, Anton Rubinstein,[5] and other high authorities, the Steinways have done more to advance the durability, action, and tone-quality of their instruments than any other makers of Europe or America. Important among Steinway’s innovations were the overstrung scale, a design in which the bass strings cross over the higher ones, permitting longer bass strings and improved tone. Moreover, Steinway used an improved cast-iron frame that bore the tension of the strings without twisting as wooden frames tend to do.[2] The Steinways’ further improvements in piano design included methods for improving the action, or key mechanism; redesigning the iron frame and case to allow increased string tension; and strengthening the soundboard.

In 1866 Steinway & Sons opened the first Steinway Hall on 14th Street in Manhattan. With a main auditorium of 2,000 seats, it became New York City’s artistic and cultural center, housing the New York Philharmonic until Carnegie Hall opened in 1891. According to pianistic giants such as Franz Liszt,[5] Anton Rubinstein, and other high authorities, the Steinways have done more to advance the durability, action, and tone-quality of their instruments than any other makers of Europe or America.