You are here: Home › art › Franz Liszt – Rockstar of the 19th Century 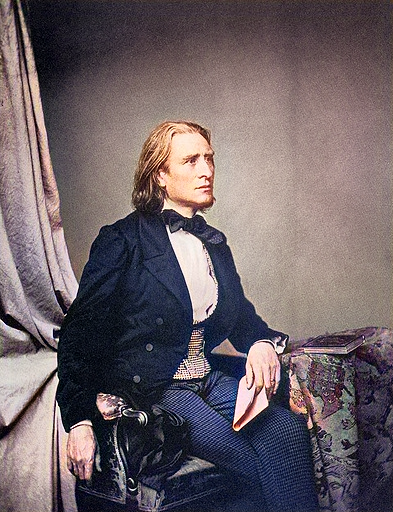 On October 22, 1811, famous Hungarian piano player, composer and conductor Franz Liszt was born. During the nineteenth century Liszt was renowned for his extreme virtuosic skill as a pianist. According to his contemporaries he was the most technically advanced pianist of his age and by the 1840s he was considered by some to be perhaps the greatest pianist of all time.

“Sorrowful and great is the artist’s destiny.”
— Franz Liszt, as quoted in  [8]

Liszt was born in 1811 as the son of Adam Liszt, who had a long lasting experience as cellist in orchestras led by the famous Joseph Haydn or Johann Hummel himself. It was soon clear that Franz was special, learning to read music and write on sheets of music autodidactically at the age of seven. He was able to perform his own music on stage when he was nine and was already considered a virtuoso. His father, aware of his son’s talented then did everything to support Franz Liszt as a pianist but caused his son a lack of education in every subject but music, which he had to make up by himself years later. But indeed his father managed to raise money for Franz’ musical education wherefore they moved to Vienna, where famous musicians and composers noticed his huge talent and before turning 15, Liszt was considered to be one of the greatest pianists of all times. After private appearances in the highest social circles and concerts in the Italian Theater of Paris, Liszt quickly rose to fame as “petit Litz“. He was appointed reborn Mozart in reviews.

In 1827, Liszt faced serious problems. His father has passed away and the 16 year old was from then on responsible for his life and most importantly for his works. He ran into a deep crisis due to some unsuccessful pieces and ended his career as a pianist for two years. In order to make a living for himself and his mother, Liszt now gave lessons in piano playing and composition. He considered becoming a priest and wrote his essay “On future church music“. On the other hand, the young Liszt developed an eccentric relationship with the ladies, much to the chagrin of his mother. It was in 1831 when Liszt heard Chopin, Paganini,[1] Rossini and Mendelssohn Bartholdy,[2] finding out that his abilities as a pianist had decreased, which deeply motivated him to end the crisis and continue his career.

Liszt now took part again in public concert life. In the summer of 1832 he was a guest of a family Reiset in Ecoutebœuf near Rouen. There he wrote an incomplete first version of his Clochette Fantasy. op. 2, a fantasy about the theme of the Rondo finale of Paganini’s Second Violin Concerto. When Liszt played the Fantasy in a Berlioz concert in 1834, it was a catastrophic failure. The fiasco was seen as new proof that Liszt was completely incapable of composing. Until the spring of 1835 Liszt composed further works, which, however, were described by contemporaries as “incomprehensible monstrosities of a fantastic eccentricity” and later Liszt generally did not include them in his catalogue of works.

Soon after his arrival in Geneva in 1835, Liszt was taken up by social obligations and took part as an honorary piano professor in meetings of the board of directors and in the teaching activities of the Geneva Conservatory, which was founded at that time. Liszt gave several concerts in Geneva, found time to compose (first Schubert transcription) and also wrote six programmatic articles on the position of artists, in which he for the first time formulated the educational claim of art for society.

The Conflict with Thalberg

In the winter of 1835/36 Sigismund Thalberg made his debut at a private concert in Paris on 16 November by the Austrian Embassy Secretary Rudolph Apponyi. He was greeted with enthusiasm by the artists present, including Rossini and Giacomo Meyerbeer, and praised as the inventor of a new piano style. Liszt noticed like everyone else the upcoming new star pianist, who earned (in contrast to Liszt) enormous amounts of money for his concerts and was soon to be at least as popular as Liszt himself. Liszt could not accept this development and faced several confrontations with Thalberg, which he mostly lost. But Franz Liszt was far from being intimidated, he heavily focused on his possibilities as pianist and composer, making him one of the greatest and most appreciated artist of all times.

The following years, in which Liszt wanted to earn money to support his “family”, were marked by successes and failures as an artist and by ups and downs as a human being. It is hardly possible to list all his stays, his successes and failures and also his affairs. He had great success as a virtuoso for example in Prague (March 1840), in Dresden and Leipzig (spring 1840, meeting Robert Schumann and Felix Mendelssohn Bartholdy), in Hamburg (October 1840), in Belgium (February/March 1841), in Weimar and Berlin (winter 1841/42), in Saint Petersburg (April 1842, meeting Michail Glinka), in East Prussia and in the Baltic States (spring 1842).

Liszt became addicted to fame and boasted of his successes and his contacts to the aristocracy. In some cities – especially in Berlin – a real “Lisztomania” developed. In order to satisfy his admirers’ need for a curl from his hair, Liszt acquired a dog whose fur served unnoticed as a curler.

Liszt got involved with the cultural development of the city of Weimar, he was a great support to many artists such as Richard Wagner.[7] In Weimar Liszt conducted many works by contemporary composers, some of whom were controversial at the time, and also performed their operas. He conducted works by Richard Wagner 36 times alone, who was particularly close to him and whom he helped flee to Zurich in the spring of 1849 after the uprising in Dresden. In the following years he supported Wagner financially and ideally and exchanged letters with him. On August 28, 1850 he premiered Wagner’s opera Lohengrin in Weimar and later planned to perform Wagner’s Ring in a specially built festival hall in Weimar.

He then composed his first orchestral works, but again faced difficulties in the 1860’s. From 1865, however, after Wagner had a relationship with Liszt’s daughter Cosima, the relationship cooled down for a long time. Furthermore, his other two children Daniel and Blandine passed away. These events are considered to be the reason why Liszt then mainly composed religious pieces, which were remarkably dark and thoughtful.

The Weimar years were Franz Liszt’s most artistically productive time. He wrote many of his piano works in Weimar, such as the Piano Sonata in B minor, the cycle Harmonies poétiques et religieuses, fifteen Hungarian Rhapsodies, as well as numerous transcriptions, piano reductions and revisions of earlier piano works, such as the Paganini Etudes. Two of his previously conceived piano concertos were also given their final form here.

In August 1861 Liszt left Weimar to marry Carolyne Princess of Sayn-Wittgenstein in Rome. After a monstrous procedure in many instances, the Cardinal Conference and the Pope in Rome had finally agreed to the divorce and remarriage of the Princess. The wedding was planned for 22 October 1861, Liszt’s 50th birthday, in the church of San Carlo al Corso in Rome. Members of the Sayn-Wittgenstein family who happened to be in Rome during these days learned of the planned wedding and intervened in the Holy See. The Holy See then demanded that the Princess hand over her files again before the marriage. Now she resigned and refused.

After his failed marriage he devoted himself more to compositions with religious themes and church music. In Rome, where he stayed until 1870, he led a partly sophisticated, partly monastic life and retired in the summer of 1863 to the monastery Madonna del Rosario on Monte Mario, where Pope Pius IX also visited him. Sometimes he also lived in the Vatican, sometimes in the convent Santa Francesca Romana on the Forum Romanum. In 1865 Liszt underwent tonsure and received the four lower consecrations.

But just as all the others, this crisis also went away and Liszt was again able to play and compose,  to travel and to love the way he always did, with the only difference that is age has begun to show its effects and it gradually became a little quiet around the famous musician until he passed away in Bayreuth on 31 July 1886 at the age of 75.

However, Franz Liszt counts as one of the greatest piano virtuosos, initiating whole new techniques to approaching the instrument. He is famous for his passionate piano solos and his program music is ever lasting. He was a great influence to Richard Wagner, a patron of young talents and a musical revolutionary who is remembered and admired even more than 100 years after his major works.