You are here: Home › religion › Philipp Melanchton – the First Systematic Theologician of the Protestant Reformation 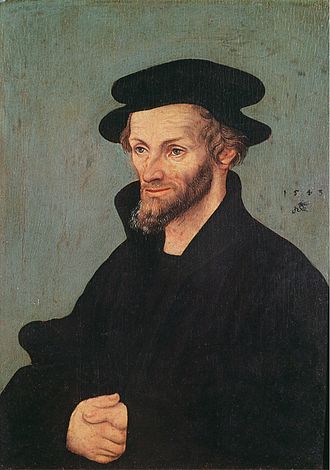 On February 16, 1497, German Lutheran reformer, collaborator with Martin Luther,[1] the first systematic theologian of the Protestant Reformation, and intellectual leader of the Lutheran Reformation Philipp Melanchton was born. Melanchthon along with Luther denounced what they believed was the exaggerated cult of the saints, asserted justification by faith, and denounced what they considered to be the coercion of the conscience in the sacrament of penance (confession and absolution), which they believed could not offer certainty of salvation.

Philipp Melanchton was born in Bretten, Electoral Palatinate in the Holy Roman Empire, as the eldest son in a wealthy middle-class family. His father Georg Schwarzerdt was armorer to Philip, Count Palatine of the Rhine, who is said to have drunk from a poisoned well in Monheim in 1504 during the Bavarian-Palatinate War, from which after a long illness he died in  1508. Melanchton, who had experienced his father only as a sick man and was impressed by his pious attitude, remembered this day all his life. Shortly before the father had also died the grandfather Reuter, in whose house Melanchton had spent his childhood. When the grandmother Reuter moved to her hometown Pforzheim, she was followed by three grandsons who were to attend the well-known Latin school there. Johan Reuchlin, Renaissance humanist and judge of the Suebian League in Stuttgart, took care of Melanchton’s education. It was Reuchlin who suggested Philipp follow a custom common among humanists of the time and change his surname from “Schwartzerdt” (literally “black earth”), into the Greek equivalent “Melanchthon” (Μελάγχθων).

In 1509 Philipp Melanchton entered the University of Heidelberg, where he studied philosophy, rhetoric, and astronomy/astrology, and became known as a scholar of Greek. Denied the master’s degree in 1512 on the grounds of his youth, he went to Tübingen, where he continued humanistic studies but also worked on jurisprudence, mathematics, and medicine. He now occupied himself with the writings of Erasmus of Rotterdam,[3] which further opened up the humanist world of education to him. In 1514, he became a master’s student and taught rhetoric and dialectics in the Realist course.  In the dispute over Reuchlin, he sided with his great-uncle, but expressed himself only reservedly in the dispute literature.

In 1518, Elector Frederick the Wise endowed a chair of Greek at his University of Wittenberg, founded in 1502. The most famous Greek scholar of the time, Johannes Reuchlin, declined the call to Wittenberg for reasons of age and recommended Melanchthon for the position. In Wittenberg, the lanky humanist from Tübingen, who was about 1.50 m tall, had a thin voice and a slight speech impediment, and initially aroused alienation. However, with his inaugural address (De corrigendis adolescentiae studiis, “On the Reorganization of the Study of Youth“), Melanchthon was able to dispel the unfavorable first impression and earned great applause.

Luther was impressed and saw in the “little Greek” the David who stood against the scholastic Goliath. It seemed to him to be a coincidence that he should receive such a capable colleague. When he had to answer to Cardinal Cajetan in October 1518, he appointed Melanchton as his deputy, who was to continue his work if he did not return. As a result, from the beginning Melanchton gave lectures not only on classical authors but also on biblical writings. Grasped by Luther’s theology, Melanchton was also able to stimulate and continue it in some respects. These first years brought with them that the humanist Melanchton became visibly the theologian and churchman. Already in September 1519 he became baccalaureus biblicus.

In the beginning of 1521 in his Didymi Faventini versus Thomam Placentinum pro M. Luthero oratio, he defended Luther. He argued that Luther rejected only papal and ecclesiastical practises which were at variance with Scripture. But while Luther was absent at Wartburg Castle, during the disturbances caused by the Zwickau prophets, Melanchthon wavered. The appearance of Philipp Melanchthon’s Loci communes rerum theologicarum seu hypotyposes theologicae (Common Places in Theology or Fundamental Doctrinal Themes, 1521) was of subsequent importance for Reformation. Melanchthon presented the new doctrine of Christianity under the form of a discussion of the “leading thoughts” of the Epistle to the Romans. Loci communes began the gradual rise of the Lutheran scholastic tradition. The Loci communes determined Melanchton’s theological destiny. He edited them three times: in 1535, 1543, and 1559. The various edits show his theological development. The Loci communes became the defining theological textbook by which generations were guided.Melanchthon also continued to lecture on the classics.  On a journey in 1524 to his native town, he encountered the papal legate, Cardinal Lorenzo Campeggio, who tried to draw him from Luther’s cause. In his Unterricht der Visitatorn an die Pfarherrn im Kurfürstentum zu Sachssen (Instruction of the Visitators to the Parish Priests in the Electorate of Saxony, 1528) Melanchthon presented the evangelical doctrine of salvation as well as regulations for churches and schools. Melanchton saw the teaching of the people as an urgent task. Therefore, during this time he again dealt with questions of teaching and the editing of the catechism. He was also responsible for reforming the universities, in Wittenberg as well as in Tübingen and Leipzig. Everywhere he emphasized the dignity of the school and its importance for the state. In 1529 he accompanied the elector to the Diet of Speyer. His hopes of inducing the Holy Roman Empire party to a recognition of the Reformation were not fulfilled.

The composition now known as the Augsburg Confession was laid before the Diet of Augsburg in 1530, and would come to be considered perhaps the most significant document of the Protestant Reformation. It consisted of 28 articles: 21 articles of faith and 7 articles on the abuses. While the confession was based on Luther’s Marburg and Schwabach articles, it was mainly the work of Melanchthon. Despite its brevity, this writing fully expressed Luther’s faith while emphasizing agreement with the ancient church. Although it was commonly thought of as a unified statement of doctrine by the two reformers, Luther did not conceal his dissatisfaction with its irenic tone. Indeed, some would criticize Melanchthon’s conduct at the Diet as unbecoming of the principle he promoted, implying that faith in the truth of his cause should logically have inspired Melanchthon to a firmer and more dignified posture

Discussions of the Lord’s Supper

Philipp Melanchthon played an important role in discussions concerning the Lord’s Supper which began in 1531. He approved fully of the Wittenberg Concord sent by Bucer to Wittenberg. He eagerly laboured for an agreement on this question, for his patristic studies and the Dialogue (1530) of Johannes Oecolampadius had made him doubt the correctness of Luther’s doctrine. Moreover, after the death of Zwingli and the change of the political situation his earlier scruples in regard to a union lost their weight. Bucer did not go so far as to believe with Luther that the true body of Christ in the Lord’s Supper is bitten by the teeth, but admitted the offering of the body and blood in the symbols of bread and wine. Melanchthon discussed Bucer’s views with the most prominent adherents of Luther; but Luther himself would not agree to a mere veiling of the dispute. Melanchthon then settled into the comparative quiet of his academic and literary labours.

The final period of Philipp Melanchthon’s life began with controversies over the Interims and the Adiaphora (1547). He rejected the Augsburg Interim, which the emperor sought to force upon the defeated Protestants. During negotiations concerning the Leipzig Interim he made controversial concessions. In agreeing to various Roman Catholic usages, Melanchthon held the opinion that they are adiaphora, if nothing is changed in the pure doctrine and the sacraments which Jesus instituted. However he disregarded the position that concessions made under such circumstances have to be regarded as a denial of Evangelical convictions. When Luther died soon after and Melanchton had given him the Latin memorial address at the funeral, he also had to take over his tasks to a large extent. Of course, he lacked Luther’s authority. Since he himself was often a party in the theological disputes that now began, he could not stand above the parties and mediate. The judgment was often made by those who were not appointed to do so. In addition, Protestantism was now facing difficult times: the invasion of the Jesuits, the Council of Trent, and the Schmalkaldic War. The last years of his life were embittered by the disputes over the Interim and the freshly started controversy on the Lord’s Supper. As the statement “good works are necessary for salvation” appeared in the Leipzig Interim, its Lutheran opponents attacked in 1551 Georg Major, the friend and disciple of Melanchthon, so Melanchthon dropped the formula altogether, seeing how easily it could be misunderstood.

Before these theological dissensions were settled, Melanchthon died. Only a few days before his death, he had written a note which gave his reasons for not fearing death. On the left of the note were the words, “You will be delivered from sins, and be freed from the acrimony and fury of theologians”; on the right, “You will go to the light, see God, look upon his Son, learn those wonderful mysteries which you have not been able to understand in this life.” The immediate cause of death was a severe cold which he had contracted on a journey to Leipzig in March 1560, followed by a fever that consumed his strength. His body had already been weakened by many sufferings. Philipp Melanchton was pronounced dead on 19 April 1560. Melanchton’s influence was great during his lifetime as well as later. He won the world of education for the Reformation and was regarded as a scientific, above all as a pedagogical authority. The Confessio Augustana became the constitutional basis of most Reformation churches.