You are here: Home › astronomy › Helen Swayer Hogg and the Globular Clusters 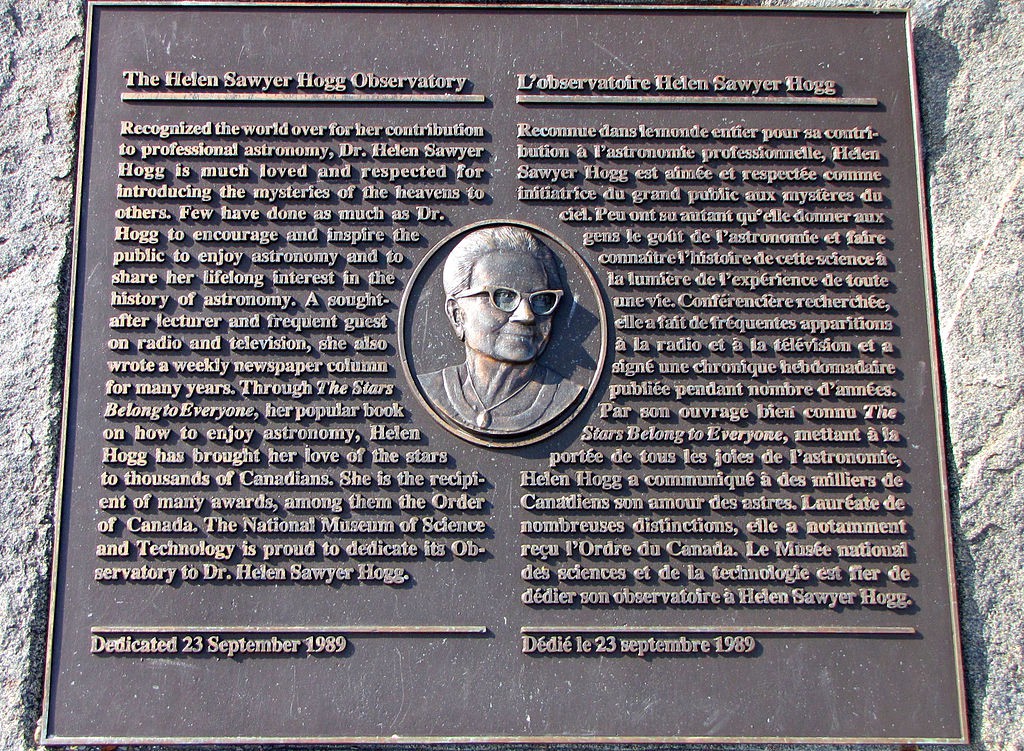 On August 1, 1905, American-Canadian astronomer Helen Sawyer Hogg was born. Hogg is noted for pioneering research into globular clusters (stars with cyclical changes of brightness found within huge, dense conglomerations of stars located in the outer halo of the Milky Way galaxy) and variable stars. She was the first female president of several astronomical organizations and a notable woman of science in a time when many universities would not award scientific degrees to women.

From Chemistry to Astronomy

Helen Hogg was born as Helen Sawyer in Lowell, Massachusetts, as the second daughter of banker Edward Everett Sawyer and his wife Carrier Sprague Sawyer, a former schoolteacher. As a child her parents strongly encouraged her to explore nature, including the stars. At the age of five she was allowed outdoors in the evening to witness the 1910 appearance of Halley’s Comet.[4] Talented academically, Helen graduated from Lowell High School at the age of 15, but chose to stay for an additional year before leaving to attend Mount Holyoke College, South Hadley, Massachusetts, in 1922. Despite having nearly completed a chemistry degree, she changed her major from chemistry to astronomy after attending introductory astronomy classes with Dr. Anne Sewell in her junior year (1925). In January 1925, Dr. Sewell took her class to see a total eclipse of the sun and a year later Annie Jump Cannon [2], a famous astronomer working at Harvard University, came to visit Mount Holyoke. Helen cited these experiences as defining moments that led to her career studying stars. In 1926 Helen completed her bachelor’s degree in astronomy, graduating magna cum laude.

After graduating from Mount Holyoke, Helen received a fellowship for graduate study at Harvard Observatory in the fall of 1926 with the help of Annie Jump Cannon. Once at Harvard Helen worked with Harlow Shapley, the director of the graduate program in astronomy, and worked hard, long hours measuring the size and brightness of globular clusters and published several papers. A globular cluster is a spherical collection of stars that orbit a galactic core, as a satellite. Globular clusters are very tightly bound by gravity, which gives them their spherical shapes, and relatively high stellar densities toward their centers. The name of this category of star cluster is derived from the Latin, globulus—a small sphere. A globular cluster is sometimes known, more simply, as a globular. Globular clusters are found in the halo of a galaxy and contain considerably more stars, and are much older, than the less dense, open clusters which are found in the disk of a galaxy.

From Harvard to Radcliffe

Helen received her master’s degree in 1928 and her doctoral degree in 1931, both from Radcliffe College, as Harvard refused to award graduate degrees in science to women at the time. In 1930, she married Frank Hogg, a young Canadian and fellow astronomy student. In 1931, they moved to Canada where Frank accepted a post at the Dominion Astrophysical Observatory in Victoria, British Columbia. Unfortunately, the depression had hit and Helen was unable to find work. She nonetheless obtained permission to use the observatory’s telescope and was able to pursue her study of globular masses on a volunteer basis.[1] Helen began taking photos of variable stars on the 72-inch reflecting telescope of the Dominion Astrophysical Observatory, cataloguing the cyclical changes in the brightness of the variable stars. At the Dominion Astrophysical Observatory, Helen found 132 new variable stars in the globular cluster Messier 2.

In 1935, Helen and Frank relocated to Ontario where Frank took a professorship with the astronomy department at the University of Toronto. Helen pursued her observations of globular clusters at the David Dunlap Observatory, and she was hired as a research officer in the astronomy department in 1936. For her first year there, she continued photographing globular clusters, amassing thousands of photographs which she used to identify many thousands of variable stars. She published Catalogue of 1116 Variable Stars in Globular Clusters in 1939, the first of three catalogues she completed, with a fourth in the works at the time of her death. In addition to her work on variable stars in globular clusters, Helen used the period-luminosity relationship of Cepheid variable stars (discovered by Henrietta Swan Leavitt in 1908 [3]) to enhance the understanding of the Milky Way Galaxy’s age, size and structure. 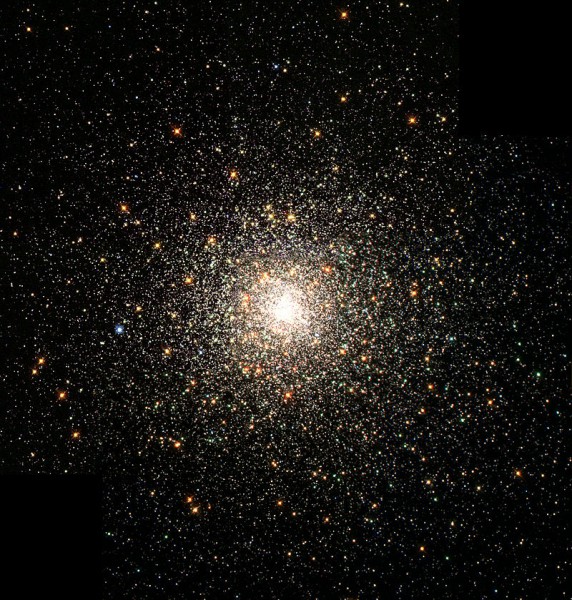 The Messier 80 globular cluster in the constellation Scorpius is located about 30,000 light-years from the Sun and contains hundreds of thousands of stars.

A Leading Authority in Astronomy

Two years later, in 1941, Helen Swayer Hogg started teaching at the astronomy department of the University of Toronto, largely as a result of male staff being away due to World War II. In 1946 her husband became director of the observatory. Retaining her position after the men returned from war, Helen advanced to assistant professor in 1951, associate professor in 1955, full professor in 1957, and professor emerita in 1976 upon her retirement. Over her research career Helen published more than 200 papers, and was a leading authority in astronomy.

Out of Old Books

By the time she was promoted to assistant professor in 1951, she continued her work on variable stars, which numbered more than 2,000 by the end of her career. The parameters she measured during her research provided a basis for estimating the age of our galaxy and for improving our understanding of its evolution. In addition, Helen published on the history of astronomy through her column “Out of Old Books“, which was published in the Journal of the Royal Astronomical Society of Canada. She was also known for the 30 years she spent writing her weekly column “With the Stars“, which was published in the Toronto Star. Helen Swayer Hogg popularized astronomy with her book The Stars Belong to Everyone in 1976, and started an eight-show television series on Canadian educational television in 1970. In 1955-1956 she was a program director in astronomy for the National Science Foundation. Moreover, she was also founding president of the Canadian Astronomical Society and always actively supported women to pursue science. Helen wanted everyone to find the same joy in the stars that she did. She encouraged women to enter science, and her students remember her for her enthusiasm and warmth.[4] In 1950 Hogg was awarded the prestigious Annie J. Cannon award from the American Astronomical Society for outstanding research by a woman astronomer. In 1967 she was awarded the Centennial Medal of Canada and in 1976 she was made a Companion of the Order of Canada, one of the highest honors in the nation.[5]