You are here: Home › astronomy › Henrietta Swan Leavitt and the Light of the Cepheids 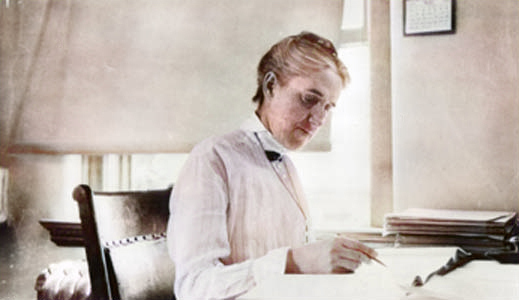 On July 4, 1868, American astronomer Henrietta Swan Leavitt was born. She is best known for her discovery of the relation between the luminosity and the period of Cepheid variable stars. Based on her luminosity-period relation for Cepheids, Edwin Hubble was able to determine that the universe is expanding.

Henrietta Swan Leavitt was born in Lancaster, Massachusetts, as daughter among seven children of Congregational church minister George Roswell Leavitt and his wife Henrietta Swan (Kendrick). When she was a child, her family moved to Cleveland, Ohio. Her parents, who were said to have been strict Puritans, did encourage Leavitt to use her intellect [2]. She attended Oberlin College in Ohio between 1885 and 1888, and graduated from Radcliffe College of Harvard University in Cambridge, Massachusetts, by then called the Society for the Collegiate Instruction for Women, with a bachelor‘s degree in 1892. She studied a broad curriculum including classical Greek, fine arts, philosophy, analytic geometry and calculus. After her graduation, Leavitt remained in school an additional year to take further astronomy courses. She then traveled in America and in Europe during which time she lost her hearing and she stayed home for several years.

In 1895, Leavitt began working at the Harvard College Observatory as one of the women human “computers” hired by Edward Charles Pickering to measure and catalog the brightness of stars as they appeared in the observatory‘s photographic plate collection. You won’t believe it, but in the early 1900s, women were not allowed to operate telescopes. Because Leavitt had independent means, Pickering initially did not have to pay her. This was a voluntary post. Later, she received $0.30 an hour for her work. It has been said that Pickering hired women in order to save money because he would have had to pay men with the same education greater salaries. Thus, Pickering‘s female computers also were nicknamed as ‘Pickering‘s Harem’. Nevertheless, impressed by her efforts, Leavitt was given a permanent position in 1902. 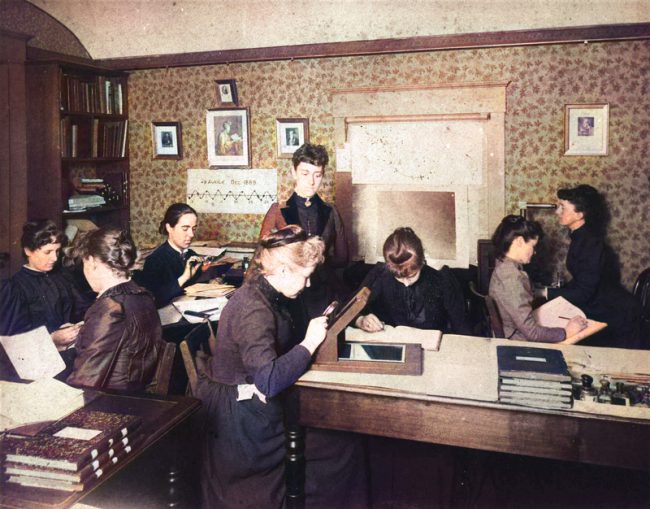 As an assistant at Harvard College Observatory, though she was talented enough, she was given little theoretical work. Pickering did not like his female staff to pursue such endeavors as own research. Instead, Leavitt was given the position of chief of the photographic photometry department. As its name implies, photometry is the science of measuring stars‘ brightness. Using photography in astronomy necessitated adjusting astronomers‘ magnitude scale to compensate for the way film registers light.[2] Leavitt was assigned the tedious task of cataloguing “variable” stars, whose brightness appears to ebb and flow in predictable patterns.

According to Astronomy, “The technique for variable hunting was strikingly uncomplicated. Leavitt would simply overlay the positive plate of a region of sky on the negative plate taken on a different night. If the positive and negative star images didn’t match up, she would flag a potential variable.”[2]

A Catalogue of Stars

Leavitt noted 1,777 new variable stars in images of the Magellanic Clouds, the neighbor-galaxies of the Milky Way. In 1908 she published her results in the Annals of the Astronomical Observatory of Harvard College, noting that a few of the variables showed a pattern: brighter ones appeared to have longer periods. After further study, she confirmed in 1912 that the Cepheid variable stars with greater intrinsic luminosity did have longer periods, and that the relationship was quite close and predictable. 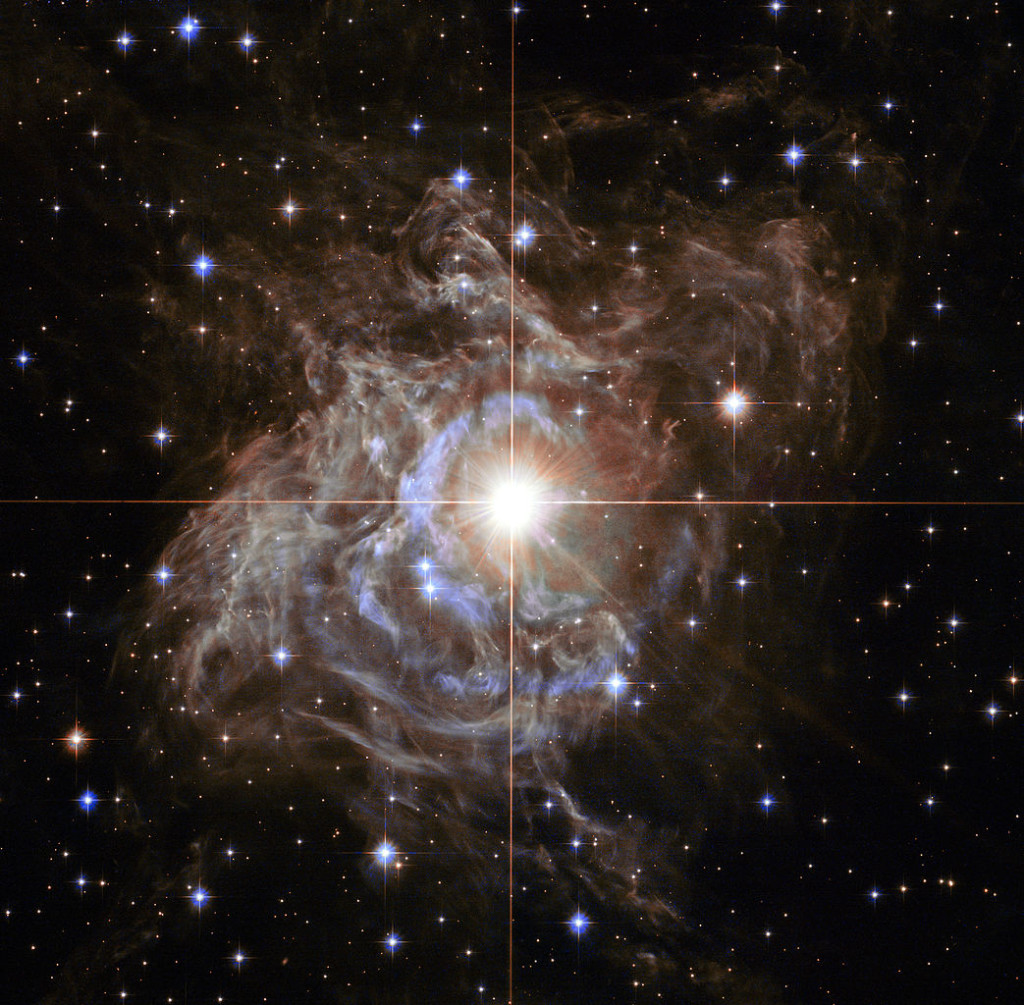 The Riddle of the Cepheids

Leavitt used the simplifying assumption that all of the Cepheids within each Magellanic Cloud were at approximately the same distances from Earth, so that their intrinsic brightness could be deduced from their apparent brightness (as measured from the photographic plates) and from the distance to each of the clouds. “Since the variables are probably at nearly the same distance from the Earth, their periods are apparently associated with their actual emission of light, as determined by their mass, density, and surface brightness.“[3] Her discovery is known as the “period-luminosity relationship“: The logarithm of the period is linearly related to the star‘s average, intrinsic luminosity.

A Standard Candle for Astronomy

It was while working at the observatory that Leavitt discovered a means to rank the magnitudes or brightness of stars on photographic plates. This ranking would become a standard used by astronomers, known as the Harvard Standard, a logarithmic scale that orders stars by brightness over 17 magnitudes.[2] The period-luminosity relationship for Cepheids made them the first “standard candle” in astronomy, allowing scientists to compute the distances to galaxies too remote for stellar parallax observations to be useful. Astronomers typically used the parallax method to determine distances between stars, which worked well for distances up to 100-light-years, but making these measurements was difficult. In 1913, Danish astronomer Ejnar Hertzsprung determined the distance of several Cepheids in the Milky Way based on Leavitt‘s results, and with this calibration the distance to any Cepheid could be accurately determined.[5]

In the Galaxy and Beyond

Cepheids were soon detected in other galaxies, such as Andromeda, and Edwin Hubble used a Cepheid variable to determine the distance to Andromeda, which was the first distance measurement for a galaxy outside the Milky Way. Cepheids became an important part of the evidence that “spiral nebulae” are actually independent galaxies located far outside of our own Milky Way.[4] Thus, Leavitt’s discovery would forever change our picture of the universe and gave astronomers a better idea as to the vastness of the heavens. It enabled Harlow Shapley to measure the size of the Milky Way galaxy. Also the reknown accomplishments of Edwin Hubble, who established that the universe is expanding, were also made possible by Leavitt’s groundbreaking research.To his credit, Hubble himself often said that Leavitt deserved the Nobel Prize for her work. The Swedish Academy of Sciences tried to nominate her for the Nobel Prize in 1924, only to learn that Leavitt already had died of cancer three years earlier in 1921.

The Night Sky – How Henrietta Leavitt Changed Our Understanding Of The Universe, [8]