You are here: Home › engineering › George Baxter and the Color Printing Process 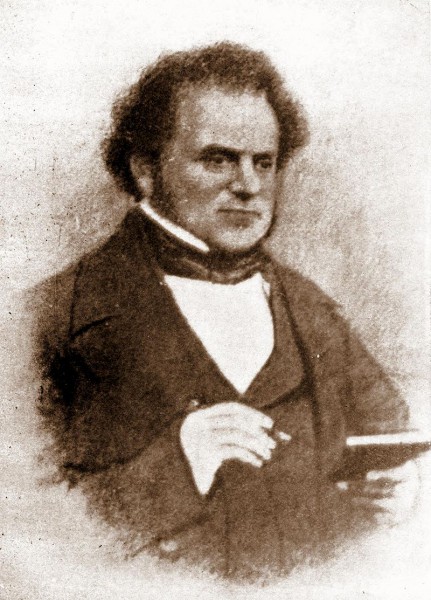 On July 31, 1804, English artist and printer George Baxter was born. Baxter is credited with the invention of commercially viable colour printing. Though color printing had been developed in China centuries before, it was not commercially viable. Baxter used wood and metal color blocks in conjunction with steel key plates and using oil inks.

George Baxter was born in 1804 in Lewes, Sussex, the second son of John Baxter (1781–1858), printer and publisher at Lewes, who issued the popular illustrated “Baxter” Bible.[1] At 20 Baxter was illustrating books printed by his father; at 23 Baxter moved to London to be apprenticed to Samuel Williams, a wood engraver. In 1827 Baxter set up business on his own and married Mary Harrild, daughter of Robert Harrild, a printing engineer and a friend of Baxter’s father. Baxter now began to experiment with his own methods of color printing – his first known color print, Butterflies, was published in 1829. Baxter’s experiments first bore commercial fruit in 1834, with two small vignettes published in Mudie’s “British Birds“.

A Patent for Colour Printing

Little of Baxter is then known until 1834 when he began to produce a number of color prints which were used as frontispieces in books published by Robert Mudie. By 1835 Baxter had developed his method of color printing sufficiently to apply for a patent, which was granted as Patent No. 6916 – Improvements in Producing Coloured Steel Plate, Copper Plate and other Impressions, which outlined the combined intaglio and relief process he would continue to use for the next thirty years. His process meant that color printing could be achieved relatively cheaply and for the first time made color available to all.[3] Baxter’s original patent ran for 14 years; after the renewal of his patent in 1849 for another five years he began to sell licenses for the use of his printing process to other printing firms.

My invention consists in colouring such impressions of steel and copper plate engravings and lithographic and zincographic printing by means of block printing in place of colouring such impressions by hand as heretofore practised, and which is an expensive process; and by such a process producing coloured impressions of a high degree of perfection and far superior in appearance to those which are coloured by hand and such prints as are obtained by means of block printing in various colours uncombined with copper and steel lithographic or zincographic impressions. (from Baxters Patent No. 6916 [2])

Although he sold his work to several highborn clients and was even summoned to visit Queen Victoria, he had little business sense and did not profit greatly from his invention, partly because he encountered competition from cheap colored lithographs. Baxter used carefully etched plates, a handpress, a system of register points, and the finest colors, oils, and paper.[1] It seems likely that his perfectionism prevented him from completing many of his commissioned works on time.

Baxter retired from active business in 1860, but the sale of his prints and materials was a failure and much of the material was bought in by the auctioneer. He began to republish his prints late in 1864 or early in 1865. Baxter was declared bankrupt in 1865 and died in 1867, after an accident involving a horse omnibus. 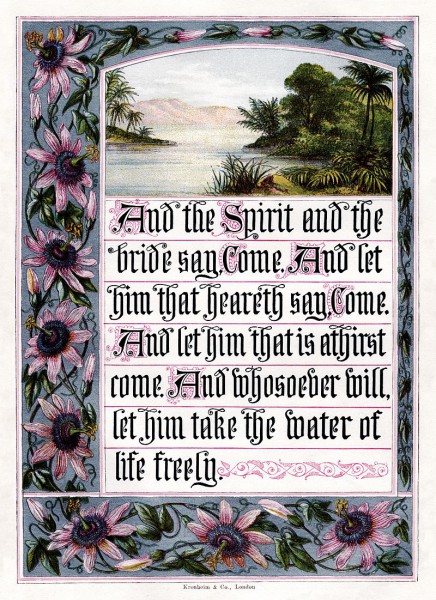 Kronheim’s Baxter process illustration of Revelation 22:17 (King James’ Version), from page 366 of the 1880 omnibus printing of The Sunday at Home

Despite experiments in colour printing already started in the 16th century, most prints were still either monochrome or hand colored in the late 1820s. This was very labour intensive and therefore very expensive. Baxter, however, brought together various methods of printing which enabled prints to be made in color which were both effective and relatively cheap.[3] Baxter’s process for producing color prints combined relief and intaglio printing methods. A ‘key’ plate was prepared, usually made of steel and using any combination of engraving, stipple, etching and aquatint. Baxter also appears to have used mezzotint and lithography to create his key plate on occasion.

The key plate provided the main lines of the image and much of the tone, light and shade. It was usually printed in a neutral tone, such as light grey or terracotta. Often Baxter used more than one color to ink the key plate – for example, to gradate the image from blue in the sky, to buff in the middle distance and to a darker color in the foreground; i.e. inking the plate à la poupée. Sometimes up to 24 separate colors were used, although ten could be considered an average number. Baxter achieved his precise registration by fixing the print over a number of spikes, over which the blocks would also fit. Some of the prints required only 8 different blocks but some involved as many as 20 different colors, each being superimposed on the other. [3] It is estimated that Baxter himself printed over twenty million prints during his career.