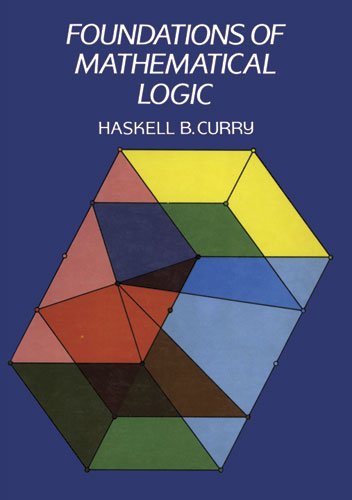 Cover of Haskell B. Curry’s ‘Foundations of Mathematical Logic’

On September 12, 1900, American mathematician and logician Haskell Brooks Curry was born. Curry’s research in the foundations of mathematics led him to the development of combinatory logic. Later, this seminal work found significant application in computer science, especially in the design of programming languages. Curry is also known for Curry’s paradox and the Curry–Howard correspondence. There are three programming languages named after him, Haskell, Brook and Curry, as well as the concept of currying, a technique used for transforming functions in mathematics and computer science.

Haskell Brooks Curry was born in Millis, Massachusetts, USA, to Samuel Silas Curry and Anna Baright Curry, who ran a school for elocution. Haskell did not show particular interest in mathematics when at high school. He entered Harvard University in 1916 to study medicine but switched to mathematics before graduating in 1920. Curry now decided that he would look for a career in electrical engineering and he took a job with the General Electric Company which allowed him to study electrical engineering part-time at the Massachusetts Institute of Technology.[1] After two years he returned to Harvard to study physics, earning a MA in 1924. Curry’s interest in mathematical logic started during this period when he was introduced to the Principia Mathematica, the attempt by Alfred North Whitehead and Bertrand Russell to ground mathematics in symbolic logic, which had been published in 1910.[3]

A PhD in Mathematics

Remaining at Harvard, Haskell Brooks Curry pursued a Ph.D. in mathematics. While he was directed by George Birkhoff [4] to work on differential equations, his interests continued to shift to logic. In 1927, while an instructor at Princeton University, he discovered the work of Moses Schönfinkel in combinatory logic (“Über die Bausteine der mathematischen Logik“, 1924). Schönfinkel’s work had anticipated much of Curry’s own research. After he had learned that Schönfinkel was in a mental hospital and therefore not continuing his line of research, Curry sought advice on who would now be the best Ph.D. supervisor. Veblen advised him that Paul Bernays at Göttingen, in Germany, would be best. In order to improve his chances of financial support, Curry wrote up his ideas on combinators for publication and this became his first paper An analysis of logical substitution which appeared in the American Journal of Mathematics in 1929.[1] Thus, Curry moved to Göttingen where he could work with Heinrich Behmann and Paul Bernays, who were familiar with Schönfinkel’s work. Curry was supervised by David Hilbert and worked closely with Bernays, receiving a Ph.D. in 1930 with a dissertation on combinatory logic.[5]

Haskell Brooks Curry accepted a position at Pennsylvania State College, where he remained for the next 37 years. He spent one year at University of Chicago in 1931–32 under a National Research Fellowship and one year in 1938–39 at the Institute for Advanced Study in Princeton. The Association for Symbolic Logic was founded in 1936 with Curry as one of the founders. He was vice-president during 1936-37 and then president of the Association in 1938-40. [1] After giving a very clear exposition of the fundamentals of combinatory logic, showing its close relationship to the λ-calculus developed by Alonzo Church, [6] Curry went on to describe his recent work. He had examined simplified methods of deriving the paradoxes (such as those of Richard and Russell) in systems of logic which are inconsistent, and had also developed a method of introducing into combinatory logic undefined notions of generality, such as quantification or formal implication, in such a way that a consistency theorem like that of Church and Rosser could still be derived.[1]

In 1942 he took a leave of absence to do applied mathematics for the US government during World War II. Immediately after the war he worked on the ENIAC project, in 1945 and 1946. In 1947 Curry also described one of the first high-level programming languages and provided the first description of a procedure to convert a general arithmetic expression into a code for one-address computer. Under a Fulbright fellowship, he collaborated with Robert Feys in Louvain, Belgium. After retiring from Penn State in 1966, Curry accepted a position at the University of Amsterdam. In 1970, after finishing the second volume of his treatise on the combinatory logic, Curry retired from the University of Amsterdam and returned to State College, Pennsylvania. Haskell Curry died on September 1, 1982 in State College, Pennsylvania.

Curry also wrote and taught mathematical logic more generally; his teaching in this area culminated in his 1963 Foundations of Mathematical Logic. His preferred philosophy of mathematics was formalism , following his mentor Hilbert, but his writings betray substantial philosophical curiosity and a very open mind about intuitionistic logic.