You are here: Home › mathematics › George David Birkhoff and the Ergodic Theorem 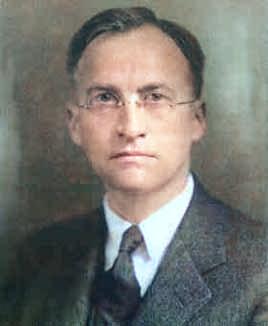 “The transcendent importance of love and good-will in all human relationships is shown by their mighty beneficent effect upon the individual and upon society.”
– George David Birkhoff

George David Birkhoff was born in Overisel Township, Michigan, the son of David Birkhoff, a medical doctor, and Jane Gertrude Droppers. Birkhoff attended the Lewis Institute (now the Illinois Institute of Technology) in Chicago from 1896 to 1902. In 1901 he began a correspondence with Harry Vandiver on a problem in number theory. Together they studied the prime factors of an – bn and later wrote up their work for publication. Then, he spent a year at the University of Chicago before switching to Harvard University in 1903 (A.B., 1905; A.M., 1906). While at Harvard he submitted the results he had obtained with Vandiver to the Annals of Mathematics in 1904 and this joint number theory paper became his first publication.[2]

He returned to Chicago in 1905 and received a doctorate there in 1907 with a thesis on Asymptotic Properties of Certain Ordinary Differential Equations with Applications to Boundary Value and Expansion Problem. His research concentrated on asymptotic expansions, boundary value problems, and Sturm-Liouville type problems but his thesis advisor Eliakim Moore appears to have been a less influential guide to Birkhoff than was Poincaré.[5] Birkhoff read Poincaré’s works on differential equations and celestial mechanics and he learnt more, and was more strongly influenced in the direction his research was taking, by Poincaré than from his supervisor.[2]

Birkhoff taught at the University of Wisconsin at Madison as an instructor from 1907 to 1909. Then, he went to Princeton as a preceptor in mathematics, becoming a professor there in 1911. In the following year he moved to Harvard as an assistant professor, he was promoted to full professor there in 1919, remaining at Harvard for the rest of his life.

In 1912, attempting to solve the four color problem, i.e. given any separation of a plane into contiguous regions, producing a figure called a map, no more than four colors are required to color the regions of the map so that no two adjacent regions have the same color, Birkhoff introduced the chromatic polynomial, which counts the number of graph colorings as a function of the number of colors. Even though this line of attack did not prove fruitful, the polynomial itself became an important object of study in algebraic graph theory.

In 1913, Birkhoff proved Poincaré’s “Last Geometric Theorem,” a special case of the three-body problem, a result that made him world famous. The theorem, which Poincaré announced without proof in 1912 shortly before he died, confirms the existence of an infinite number of periodic solutions for the restricted three-body problem – i.e., stable orbits involving three (solar) bodies.[2] Birkhoff wrote on the foundations of relativity and quantum mechanics, publishing (with R. E. Langer) the monograph Relativity and Modern Physics in 1923. In 1923, Birkhoff also proved that the Schwarzschild geometry is the unique spherically symmetric solution of the Einstein field equations. A consequence is that black holes are not merely a mathematical curiosity, but could result from any spherical star having sufficient mass.

In 1931, stimulated by the recent work of John von Neumann [6] and others, he published his formulation of the ergodic theorem, which has probably become his most durable result. Combining insights from physics on the ergodic hypothesis with measure theory, this theorem solved, at least in principle, a fundamental problem of statistical mechanics. The ergodic theorem has also had repercussions for dynamics, probability theory, group theory, and functional analysis. He also worked on number theory, the Riemann–Hilbert problem, and the four colour problem. He proposed an axiomatization of Euclidean geometry different from Hilbert’s; this work culminated in his text Basic Geometry (1941).

In his later years, Birkhoff published two curious works. His 1933 Aesthetic Measure proposed a mathematical theory of aesthetics, for which he spent a year studying the art, music and poetry of various cultures around the world. His 1938 Electricity as a Fluid combined his ideas on philosophy and science. His 1943 Theory of Gravitation is also puzzling, since Birkhoff knew that his theory allows as sources only matter which is a perfect fluid in which the speed of sound must equal the speed of light.