You are here: Home › astronomy › Harlow Shapley and the Size of the Milky Way 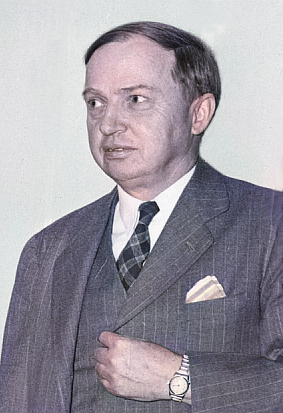 On November 2, 1885, American astronomer Harlow Shapley was born. Shapley is best know for having correctly estimated the size of the Milky Way Galaxy and the sun’s position within it.

Harlow Shapley was born in Nashville, Missouri and dropped out of school after fifth grade. However, later on he managed to return to school and complete a six-year high school program in only two years. At the age of 22, he intended to enroll at the University of Missouri to study journalism, but after already moving there he found out that the university’s school of journalism was postponed and Shapley decided to study something different in the meantine. The young man decided to enroll in the first course on the list, but rejected archaeology and chose astronomy.

The Milky Way is larger than believed

After graduating, Shapley earned a fellowship to Princeton University where he studied under Henry Norris Russell and used the period-luminosity relation for Cepheid variable stars, which have been discovered by Henrietta Swan Leavitt,[4] to determine distances to globular clusters. Shapley was instrumental in moving astronomy away from the idea that Cepheids were spectroscopic binaries, and toward the concept that they were pulsators. He was the first to realize that the Milky Way Galaxy was much larger than previously believed, and that the Sun’s place in the galaxy was in a nondescript location. This discovery by Shapley is a key part of the Copernican principle, according to which the Earth is not at the center of our Solar System, our galaxy, or our Universe.

The Start of Extragalactic Astronomy

Shapley participated in the “Great Debate” with Heber D. Curtis on the nature of nebulae and galaxies and the size of the Universe. The debate took place on April 26, 1920, in the hall of the United States National Academy of Sciences in Washington D.C. Shapley took the side that spiral nebulae (now galaxies) are inside our Milky Way, while Curtis took the side that the spiral nebulae are ‘island universes’ far outside our own Milky Way and comparable in size and nature to our own Milky Way. This issue and debate are the start of extragalactic astronomy, while the detailed arguments and data, often with ambiguities, appeared together in 1921. Characteristic issues were whether Adriaan van Maanen had measured rotation in a spiral nebula, the nature and luminosity of the exploding novae and supernovae seen in spiral galaxies, and the size of our own Milky Way. However, Shapley’s actual talk and argument given during the Great Debate was completely different from the published paper. Historian Michael Hoskin says “His decision was to treat the National Academy of Sciences to an address so elementary that much of it was necessarily uncontroversial.“, with Shapley’s motivation being only to impress a delegation from Harvard who were interviewing him for a possible offer as the next Director of Harvard College Observatory. With the default by Shapley, Curtis won the debate. The astronomical issues were soon resolved in favor of Curtis’ position when Edwin Hubble [4] discovered Cepheid variable stars in the Andromeda Galaxy.

The Size of the Milky Way

Shapley assumed an incorrect normalization of the period-luminosity relation of Cepheids, so he overestimated the size of the Milky Way by far (300,000 light-years instead of 100,000 light-years). Furthermore, he was not aware of the age differentiation of stellar populations, so he underestimated the distance to the Small Magellanic Cloud and the Andromeda Nebula. First normalizations of the period-luminosity relation were made by the Danish astronomer Ejnar Hertzsprung.[5] Shapley wrote many books on astronomy and the sciences including the ‘Source Book in Astronomy‘. He also served on the board of trustees of Science Service, now known as Society for Science & the Public, from 1935 to 1971.

Shapley died in a nursing home in Boulder, Colorado on October 20, 1972, shortly before his 87th birthday