You are here: Home › medical science › Alois Alzheimer and the Disease Of Advanced Civilization 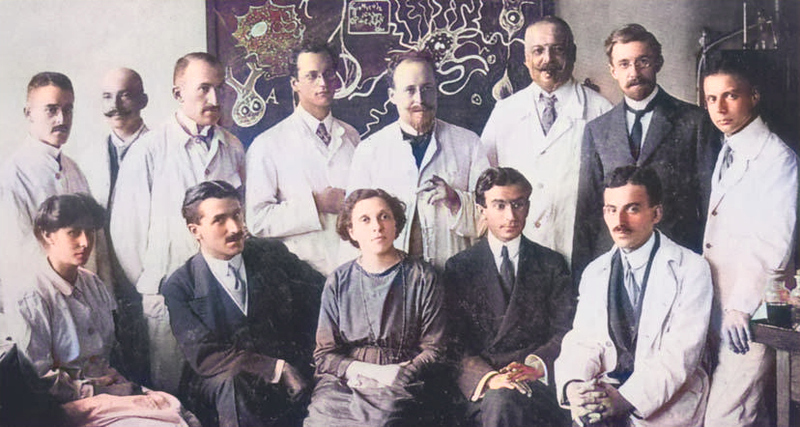 On November 3, 1906, German psychiatrist Alois Alzheimer presented for the first time the pathology and the clinical symptoms of presenile dementia together, later renamed in his honor as Alzheimer’s disease.

Alois Alzheimer was born in Marktbreit, Bavaria, the eldest son from the second marriage of the notary Eduard Alzheimer and his wife Barbara Theresia née Busch, a sister of the first wife Eva-Maria née Busch, who died in 1862. He attended school in Marktbreit and the later Kronberg-Gymnasium Aschaffenburg. Later he studied medicine at the University of Würzburg and the University of Tübingen. His dissertation, completed in 1887 under Albert von Kölliker [5] at the Anatomical Institute in Würzburg, dealt with the histology and function of the earwax glands. He graduated in 1888 with the grade “very good” and received his license to practice medicine. Shortly after, Alzheimer became assistant to the psychiatrist Heinrich Hoffman, who became later famous for his children’s book ‘Struwwelpeter‘. Together, they practiced new treatments for mental ill patients. Instead of using straitjackets and forcing the patients to eat, they preferred long walks in the park and thermal treatments. In the late 1890’s, Alois Alzheimer got married but the happiness could not last for long. His wife got the Alzheimer disease in 1901 and passed away in the same year. The devastated widower immediately started researching on the mysterious illness his wife suffered from.

The Disease of Forgetting

In November of the same year, Alzheimer met the patient Auguste Deter. Her husband took her to the clinic because of her strange behavior in the last months. After interviewing the patient, Alzheimer noted that the woman had no orientation on time, she never knew where she was and could only remember very little details of her daily life. Also she could not give reasonable answers and her mood often changed from fear to anger to sorrow very quickly. Alzheimer got very interested in the case of Auguste Deter, because of her young age. Previous patent showed pretty much similar symptoms but all were at least 70 years old, Deter was only 51 and Alzheimer soon titled her illness as the ‘disease of forgetting’.

In 1902, Alois Alzheimer moved to Heidelberg and later to Munich. During these years, the scientist prevented that his patient Auguste Deter would be moved to another hospital because he wanted to examine her after she passed away. In April 1906, Alzheimer received the message that Auguste Deter died from blood poisoning and he started examining her brain. Alzheimer found out that many nerve cells of her brain have died and senile plaques have established. On November 3, 1906, he presented his stunning research results on the pathology and the clinical symptoms of presenile dementia to the University of Tübingen. His research laboratory gained international attention. Next to the Alzheimer disease, the scientist made significant contributions to understanding further illnesses like Huntington’s chorea, brain tumors, and epilepsy.

Alzheimer’s last station in life was Breslau. In 1912 he succeeded Karl Bonhoeffer as full professor at the Friedrich Wilhelm University and director of the “Royal Psychiatric and Nervous Clinic”. The intercession of his teacher Kraepelin helped in this, because the favorite for this position had been Eugen Bleuler from Zurich.[6] In 1915, there was a rapid decline in his health. Heart trouble, kidney failure and respiratory distress pointed to a rapid end. Alzheimer died at the age of 51 surrounded by his family.

The Alzheimer Enigma: The Causes of the Dementia Epidemic | Albert Hofman || Radcliffe Institute [9]