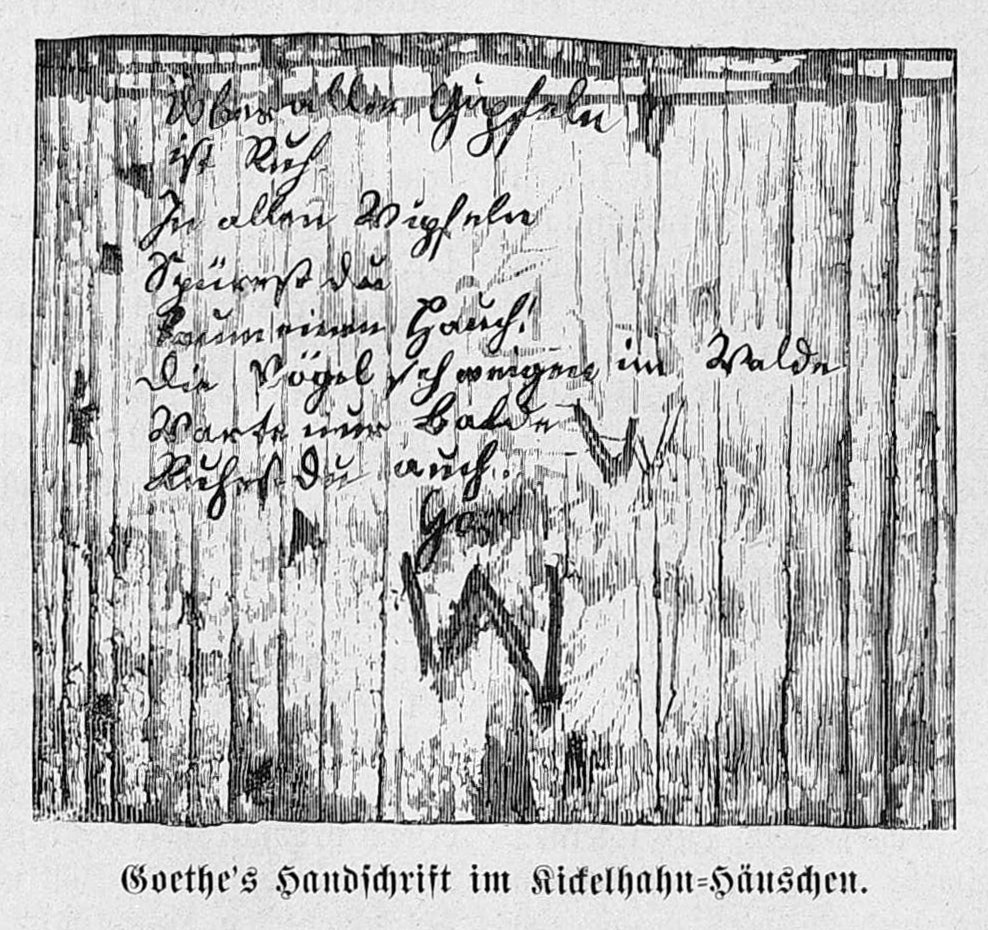 On September 6, 1780, the German poet Johann Wolfgang von Goethe wrote with a pencil on the wall of a wooden cabin on the Kickelhahn mountain in Ilmenau, Thuringia the poem ‘Wanderers Nachtlied‘.

This poem called ‘Über allen Gipfeln‘ depicts the second poem after ‘Der du vom Himmel bist‘ from 1776. Together they are named ‘Wanderers Nachtlied‘ and count as his most important and most discussed works.

There is a nice English translation by Henry Wadsworth Longfellow:[5]

O’er all the hilltops
Is quiet now,
In all the treetops
Hearest thou
Hardly a breath;
The birds are asleep in the trees:
Wait, soon like these
Thou too shalt rest.

At the time when these poems were written, Goethe faced difficult times. He had just arrived in Weimar in 1775 and began his administrative works for the duchy Sachsen-Weimar-Eisenach under Duke Karl August. Goethe spent most of his time worrying over politics and finances, wherefore he could barely dedicate himself to poetry. However he took the time in September 1780 to climb up the Kickelhahn, the highest hill around, and escape from the busyness and the everyday hustle.

There, “on the Gickelhahn, the highest mountain of the district“, to have spent the night “in order to avoid the desert of the city, the complaints, the desire to avoid the incorrigible confusion of the people“, Goethe reported to his friend Charlotte von Stein [3] with a “d. 6 Sept. 80” dated letter, and continued: “If only my thoughts had been written down together from today there are good things underneath. My best I have climbed into the Hermannsteiner cave, to the place where you were with me and have kissed the S, which stands as fresh as yesterday marked and kissed again“. The verses which he wrote on the wooden wall of the hut he did not mention at all in his following letters.

Written on a Wooden Wall

Soon people noticed Goethe’s inscription into the wall of the now called Goethe-cabin and it was published in 1800 by Joseph Rückert without Goethe’s permission. The poem reached a high popularity and was set to music by the famous Austrian composer Franz Schubert [2] in 1815 to honor Goethe and his works.

Experts wonder up to this day who the poem was dedicated to. Some assume it was just written for hikers, following his steps on top of the Kickelhahn, others prefer to think he wrote it for himself, and again others assume the poem was written for Charlotte von Stein. She was a very close friend to Goethe and they had deep and intimate correspondence with each other. Whomever this poem was dedicated to, it meant a lot to its author. Goethe came back to the little house on top of the Kickelhahn a few months before his passing to see and read the poem again, while tears ran over his cheeks, according to the local guide he was with.

“Goethe read these few verses, and tears flowed down his cheeks. Very slowly he pulled his snow-white handkerchief out of his dark brown cloth skirt, dried his tears and said in a soft, melancholic tone: “Yes: just wait, you’ll rest soon, too”, remained silent for half a minute, looked again through the window into the gloomy spruce forest and turned to me with the words: “Now we want to go again”. [4]

The Significance of the Poem

To emphasize the meaning of Goethe to Germany and the meaning of this little poem it must be said, that even though the little shabby cabin on the Kickelhahn burned down in 1870 it was rebuilt and the poem was translated into 15 languages now readable by all tourists finding their way to the cabin. A photograph from 1869 documents Goethe’s text in the state it had immediately before his destruction. The photo shows not only overpaintings and scribbles that had distorted the original over the course of 90 years, but also saw marks: a tourist had tried in vain to cut the text out of the wall.