You are here: Home › literature › The Lyric Poems of Henry Wadsworth Longfellow 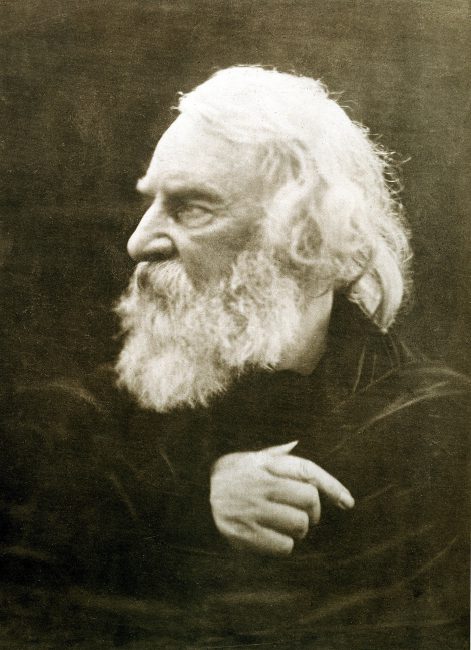 On February 27, 1807, American poet and educator Henry Wadsworth Longfellow was born. He was the first American to translate Dante Alighieri‘s Divine Comedy.[1] Longfellow wrote many lyric poems known for their musicality and often presenting stories of mythology and legend. He became the most popular American poet of his day and had success overseas.

“It was the schooner Hesperus,
That sailed the wintry sea;
And the skipper had taken his little daughter,
To bear him company.”
– Henry Wadsworth Longfellow, The Wreck of the Hesperus (1842)

Longfellow’s mother came from an old New England Puritan family, his maternal grandfather Peleg Wadsworth was a general in the War of Independence and later became a member of the U.S. House of Representatives, as did his father Stephen Longfellow. The Longfellow family emigrated to America in 1676 from Yorkshire, England. On his father’s side, Henry Longfellow is also descended from Priscilla and John Alden, one of the famous Pilgrims who embarked in 1620 on the Mayflower [2] and founded the colony of Plymouth. Born in what is now Maine, USA, Longfellow grew up well cared for and studied at Bowdoin College in Brunswick along with his brother Stephen, where he became friends with future author Nathaniel Hawthorne, who became his lifelong friend. He pursued his literary goals by submitting poetry and prose to various newspapers and magazines, partly due to encouragement from Professor Thomas Cogswell Upham. He published nearly 40 minor poems between January 1824 and his graduation in 1825. In 1825 after his successful graduation he was offered a position as an on-site modern language teacher. However, he didn’t answer immediately, but between 1825 and 1829, and from 1831 to 1835, he traveled in Europe, learning German, Dutch, Swedish, Finnish, and other languages, reading widely and being deeply influenced by German Romanticism and Goethe. In Madrid, he spent time with Washington Irving, who encouraged the young Longfellow to pursue writing. Upon his return, he taught at Harvard University. During his years teaching at the college, he translated textbooks from French, Italian, and Spanish; his first published book was a translation of the poetry of medieval Spanish poet Jorge Manrique in 1833. 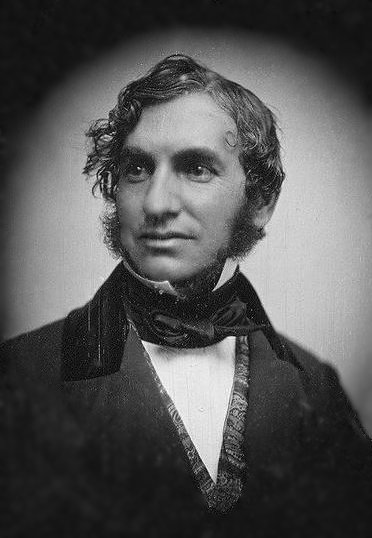 Longfellow circa 1850, daguerreotype by Southworth & Hawes

“All your strength is in your union,
All your danger is in discord;
Therefore be at peace henceforward,
And as brothers live together.”
– Henry Wadsworth Longfellow, The Song of Hiawatha (1855)

After his first wife, Mary Storer Potter, died in 1835 after only four years of marriage, Longfellow married Frances Elizabeth “Fanny” Appleton, a daughter of Nathan Appleton, in 1843 in his second marriage, with whom he had six children: Charles Appleton (1844-1893), Ernest Wadsworth (1845-1921), Fanny (1847-1848), Alice Mary (1850-1928), Edith (1853-1915), and Anne Allegra (1855-1934). Longfellow published several nonfiction and fiction prose pieces in 1833 inspired by Irving, including “The Indian Summer” and “The Bald Eagle“. Three years after the death of his first wife, Mary Storer Potter, he was inspired to write the poem “Footsteps of Angels” about her. Several years later, he wrote the poem “Mezzo Cammin,” which expressed his personal struggles in his middle years. Longfellow began publishing his poetry in 1839, including the collection Voices of the Night, his debut book of poetry. The bulk of Voices of the Night was translations, but he included nine original poems and seven poems that he had written as a teenager. Ballads and Other Poems was published in 1841 and included “The Village Blacksmith” and “The Wreck of the Hesperus“, which were instantly popular. The small collection Poems on Slavery was published in 1842 as Longfellow’s first public support of abolitionism.

In 1844 Longfellow was elected to the American Academy of Arts and Sciences. Longfellow left his chair at Harvard and retired in 1854 to devote himself entirely to writing. In 1861, his second wife Frances died after accidentally setting her dress on fire. Longfellow was deeply affected by this. In 1879, he wrote the sonnet The Cross of Snow in honor of his late wife before dying three years later in 1882:

Such is the cross I wear upon my breast
These eighteen years, through all the changing scenes
And seasons, changeless since the day she died.
– Henry Wadsworth Longfellow, The Cross of Snow (1879)

Longfellow spent several years translating Dante Alighieri‘s Divine Comedy.[1] To aid him in perfecting the translation and reviewing proofs, he invited friends to meetings every Wednesday starting in 1864. The “Dante Club”, as it was called, regularly included William Dean Howells, James Russell Lowell, and Charles Eliot Norton, as well as other occasional guests. The full three-volume translation was published in the spring of 1867, but Longfellow continued to revise it. In March 1882, Longfellow went to bed with severe stomach pain. He endured the pain for several days with the help of opium before he died surrounded by family on Friday, March 24.

Longfellow was a folk poet. His rhymes were catchy. He was one of the first to deal with typical American themes: Patriotism, love of the countryside, nature, and traditions of his native land. He wrote numerous dramas and several novels, all of which have been more or less forgotten. Of lasting importance are the epic poems Evangeline (1847) and The Song of Hiawatha (1855), which he modeled on the Finnish national epic Kalevala. It describes the life of the Ojibwa chief Hiawatha and ends with his recommendation to his people to bow to the ‘white man’. The work inspired Antonín Dvořák to write the 2nd movement of his 9th Symphony, “From the New World.”  Because his work seemed overly conventional-and thus too European-he was dropped from the canon of American literature after 1900, due in particular to the judgment of George Santayana and Vernon Louis Parrington. However, until not long ago, many American students memorized his poem Paul Revere’s Ride, which glorifies an episode from the American War of Independence. Also, the song I Heard the Bells on Christmas Day, based on Longfellow’s poem Christmas Bells, is still a popular Christmas song today. Longfellow He also was important as a translator; his translation of Dante became a required possession for those who wanted to be a part of high culture.

A Conversation with Nicholas Basbanes on Henry Wadsworth Longfellow, [9]