You are here: Home › art › Caspar David Friedrich and the German Romanticism 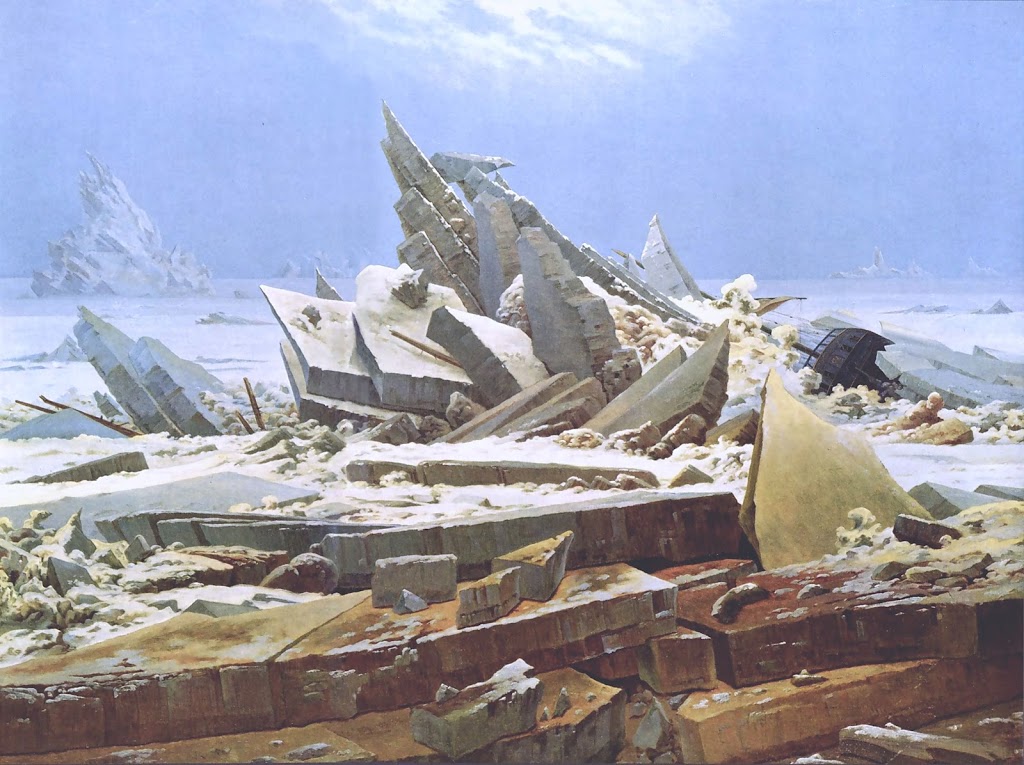 On September 5, 1774, Caspar David Friedrich, one of the most important painters of the German Romanticism, was born. His best known works depict the numerous landscapes with their fogs barren trees, and ruins surrounding the contemplative and silhouetted characters.

“The beauty, the spirit of Germany, its sun, moon, stars, rocks, seas and rivers can never be expressed this way..”
– Caspar David Friedrich, shortly after his return in 1798; as quoted in [8]

Caspar David Friedrich was born in 1774, the sixth of ten children of Adolph Gottlieb Friedrich and his wife, Sophie Dorothea, née Bechly, in Greifswald, a port town belonging to Swedish Pomerania. He had to go through a dramatic childhood. After his mother’s early death, his sister Dorothea was his mother’s replacement. The upbringing was dominated by the puritanical severity of the father, who lived a Protestantism with pietistic influence. His sister also passed away, and when he was 13, and he had to watch his younger brother die while trying to rescue Caspar David, who fell into a frozen lake. Experts assume that these incisive events deeply influenced his later works. 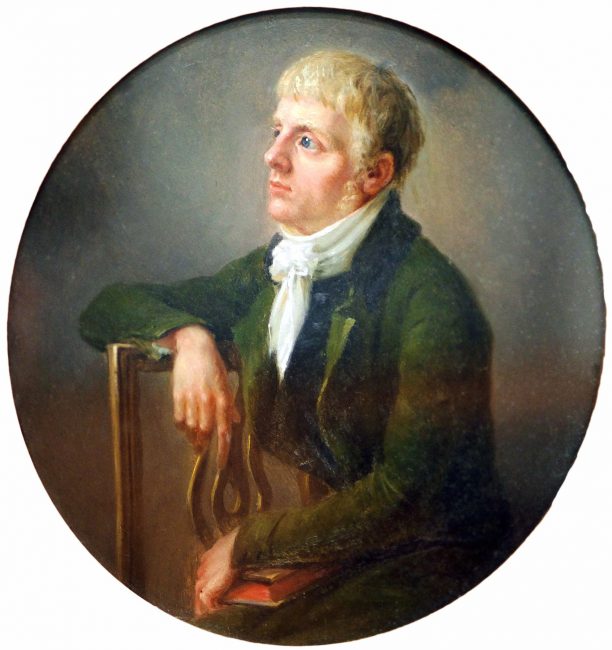 Friedrich went through a very formal art schooling and began in 1790 in Greifswald. To his early influences belongs Ludwig Gotthard Kosegarten, a theologician from whom he learned about the relationship between religion and nature. Later on, his teachers were mainly under the influences of the ‘Sturm und Drang‘ period, and he was part of the change from the neo-classical to the romantic movement in the field of art. Soon he noticed that landscapes belonged to his preferred paintings and he got his inspirations from numerous journeys to the Baltic Sea or the Harz Mountains. He studied the composition of nature, light and topography very well and turned them into pencil sketches before painting them at home with watercolour, sepia or later in oil.

Breakthrough with the Tetschen Altar

Caspar David Friedrich was able to make up a great reputation when he took part in an art contest in 1805, which was initiated by Johann Wolfgang von Goethe and two years later, he completed one of his most famous works, the ‘Tetschen Altar‘. It pictures the crucified Christ on top of a mountain, still nature is the leading topic in the painting, typical for Friedrich’s works.[7] 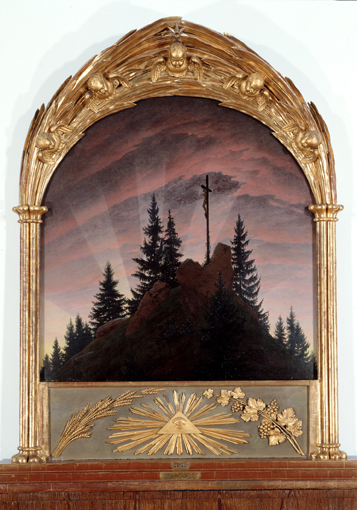 After Napoleon’s victory in the Battle of Jena and Auerstedt in 1806, Frederick lived in Saxony, in a country allied with France. Dresden was repeatedly the scene of warlike events, occupied by French, Prussians and Russians. The painter lived in the Pirnaschen suburb in a house on the Elbe in simple circumstances. He was a supporter of a national liberation movement and increased his national liberalism to a chauvinistic French hatred. His humble studio became a centre of patriotic men.

“Through the gloomy clouds break / Blue sky, sunshine, / On the heights and in the valley / Sing the lark and the nightingale
God, I thank you that I live / Not forever in this world / Strengthen me that my soul rise / Upward toward your firmament.”
– some poetry lines of Caspar David Friedrich, c. 1802-05 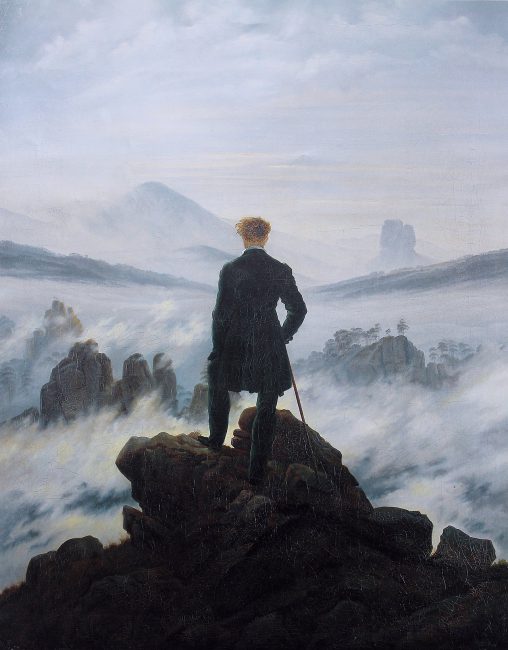 Caspar David Friedrich, Wanderer above the Sea of Fog (1818)

In 1818, his painting style changed into brighter colors and he more and more included humans in his paintings, many experts attribute this change to his marriage to Caroline Bommer in the same year. He was able to increase his fame and support by numerous artists, philosophers and writers world wide, but in 1825, his reputation slowly faded. The political disappointments at the time of restoration, spying, intrigues at the academy and censorship made Friedrich bitter. His art remained as a space in which he could express his political attitude. On 17 January 1824 the painter was appointed associate professor at the Dresden Academy. However, he had hoped to succeed the Academy teacher Johann Christian Klengel, which probably failed because of his political attitude. In the summer of 1826, the painter travelled to Rügen for a cure in order to alleviate unspecified complaints. Hikes were only possible to a limited extent. This journey also alleviated his never completely disappeared homesickness.

In 1830 another period of increasing artistic productivity began, during which important paintings of high mastery such as The Great Enclosure or The Stages of Life were created. The transparent pictures show the attempt at technical and aesthetic innovation. His early supporters turned away from him and his pictures again got darker and depressive, his family had to live in poverty from then on. His stroke in 1835 made all things worse, he could barely paint in oil anymore and the topic death influenced his works increasingly.

Caspar David Friedrich died at the age of 65 in Dresden on 7 May 1840 and was buried in the cemetery of the Holy Trinity. Even though the passing of Caspar David Friedrich was hardly noticed by the art community, he still had an enormous influence in society and art during his lifetime and beyond. He was responsible for making the landscape an accepted genre in the community. His influences reached from Germany to Switzerland, where Arnold Böcklin counts as a direct follower. He even affected the art scene in Russia, where many citizens from the high society were thrilled by his works and and bought his collections, which influenced many Russian painters.