You are here: Home › physics › George Uhlenbeck and the Electron Spin 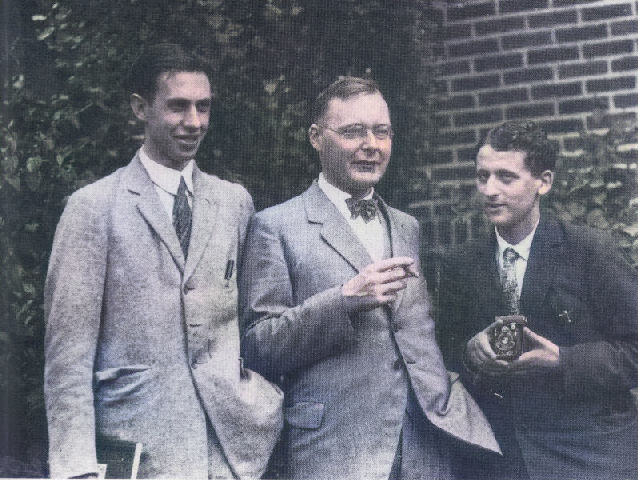 On December 6, 1900, Dutch-American theoretical physicist George Eugene Uhlenbeck was born. Together with with Samuel A. Goudsmit, Uhlenbeck proposed the concept of electron spin (Jan 1925) – a fourth quantum number which was a half integer.

George Uhlenbeck was the son of Eugenius Uhlenbeck, who served in the Dutch East Indian Army, and Anne Beeger Uhlenbeck, the daughter of a Dutch major general. He attended the Hogere Burgerschool (High School) in The Hague, from which he graduated in 1918 to become a student in chemical engineering at Delft University of Technology. He transferred to the Leiden University, to study physics and mathematics, and he earned his bachelor’s degree in 1920. Uhlenbeck was then admitted by Paul Ehrenfest [10] (a student of Ludwig Boltzmann‘s) to the Wednesday evening physics colloquium in Leiden, who should become the most important scientific influence in his life. Uhlenbeck’s parents did not find it easy to provide the necessary financial support for him at university. To keep down the expense, he travelled every day from The Hague to Leiden, a long and tiring journey.[2]

What is currently happening in Physics

From 1922 to 1925 Uhlenbeck was the tutor of the younger son of the Dutch ambassador in Rome, where he met his longtime friend, Enrico Fermi.[4] In 1923, Uhlenbeck received his master’s degree from Leiden and became assistant of Ehrenfest’s in 1925. Ehrenfest assigned him to work with his graduate student, Samuel Goudsmit for a quick update on “what was currently happening in physics”.[1] In January 1925 Wolfgang Pauli had proposed that the electron should be given an additional fourth quantum number which was a half integer. This was one of the clues which led Uhlenbeck to arrive at the idea of electron spin.[2] The concept immediately excited Niels Bohr, Pauli, Einstein, Heisenberg and others interested in quantum theory.[2] In mid-September 1925, Uhlenbeck and Goudsmit discovered the spin on the electron, which posits an intrinsic angular momentum for all electrons.[1]

The electron is a charged particle of charge (−1e), where e is the unit of elementary charge. Its angular momentum comes from two types of rotation: spin and orbital motion. From classical electrodynamics, a rotating electrically charged body creates a magnetic dipole with magnetic poles of equal magnitude but opposite polarity. This analogy holds as an electron indeed behaves like a tiny bar magnet. One consequence is that an external magnetic field exerts a torque on the electron magnetic moment depending on its orientation with respect to the field. In 1927 Uhlenbeck earned his Ph.D. with his thesis: Over Statistische Methoden in de Theorie der Quanta” (“On Statistical Methods in the Quantum Theory” ).

In 1927, Uhlenbeck took a position as an instructor in physics at the University of Michigan in Ann Arbor, Michigan, where he stayed until 1935, when he succeeded H. A. Kramers as a professor of theoretical physics in Utrecht. In 1938, Uhlenbeck spent half a year as visiting professor at Columbia University in New York City, and then he returned to Ann Arbor as a professor of theoretical physics during the next year. Because of the rise of Nazism in Europe, he and his wife Else decided to leave his position in the Netherlands and return to America. During part of World War II, from 1943 through 1945, Uhlenbeck led a theory group at the Radiation Laboratory in Cambridge, Massachusetts which was doing radar research. In 1945, he returned to Ann Arbor, where he was named the Henry Cahart Professor of Physics in 1954. He remained in Ann Arbor until 1960, when he joined the Rockefeller Institute for Medical Research (now the Rockefeller University) in New York City as a professor and member of the Institute.

As well as fundamental work on quantum mechanics, Uhlenbeck worked on atomic structure and the kinetic theory of matter. He extended Boltzmann’s equation to dense gasses and wrote two important papers on Brownian motion. The main topic on which he worked throughout his career was statistical physics. The aim of this topic was to understand the relationship between physics at atomic level and that at macroscopic level.[2]