You are here: Home › biology › Evolution is not Reversible – Louis Dollo

Louis Dollo supervising the mounting of an Iguanodon skeleton

On December 7, 1857, French-born Belgian palaeontologist Louis Dollo was born. Dollo is best known for his work on dinosaurs. He also posited that evolution is not reversible, known as Dollo’s law. Together with the Austrian Othenio Abel, Dollo established the principles of paleobiology.

Louis Dollo was born in Lille, Nord-Pas-de-Calais. At the École Centrale de Lille, Dollo studied with the Jules Gosselet and the zoologist Alfred Giard. In 1877, Louis Dollo earned his engineering degree and afterwards he worked in the mining industry. Simultaneously, Dollo became quite enthusiastic for paleontology. From 1878 he supervised for three years the recovery of the Iguanodon fossils (31 well-preserved skeletons) discovered at a depth of 320 m in a coal mine on the Franco-Belgian border in Bernissart. At first this was only a sideline, but in 1881 he moved all the way to Belgium. 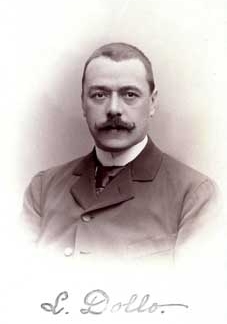 He devoted himself to their study as a scientific passion, initially concurrently with his engineering career. From 1882 to 1885 he worked on the reconstruction of the Iguanodon skeletons as curator for vertebrate fossils at the Institut Royale des Sciences Naturelles de Belgique in Brussels and their installation in the Belgian Museum of Natural History, where he became curator in 1891. His training as an engineer helped him with the difficult installation (which was first carried out in a church before being transferred to the museum). His reconstruction as an upright biped is considered obsolete today, and the skeletons exhibited in the Natural History Museum in Brussels have also been reconstructed as quadrupeds. It was Dollo who correctly identified the thumb extension still placed on the nose by both the first discoverer Gideon Mantell [4] and Richard Owen, [5] and he distinguished two types of finds. The 8 m long animal was erected 5 m high and weighed up to 4.5 tons. The hands had 5 fingers each, the feet 3 toes each. Fossil bones of Iguanodon are the first reliably assignable dinosaur fossils ever found. Already in 1809 the geology pioneer William Smith collected the fragment of a large tibia bone in the area of Cuckfield in Sussex during his exploration of the geology of Great Britain. For more than 150 years, the piece lay largely unnoticed in the collection of the Natural History Museum in London and was only identified as a remnant of Iguanodon in 1970.

During 1890, Louis Dollo formulated a hypothesis on the irreversible nature of evolution, known later as “Dollo’s Law“. The hypothesis states that evolution takes place as a directed process (orthoevolution) and is in principle irreversible. It was first advanced by a historian, Edgar Quinet.[6,7] According to the famous hypothesis, a structure or organ lost during the course of evolution would not reappear in that organism. This hypothesis was largely accepted until Michael F. Whiting’s 2003 discovery that certain insects that had lost their wings regained them millions of years later. However, it was redeemed on the molecular level in 2009 as a result of a study on glucocorticoid receptors.

As Louis  Dollo continued his work on fossils, he also studied dinosaurs along with their ecology. Dollo became one of the first scientists to see fossil animals as part of an ecosystem. Because of that, he was instrumental in the development of paleobiology, and he kept up an extensive correspondence with Othenio Abel, another famous early paleobiologist. In 1909 Dollo became Professor of Palaeontology at the University of Brussels (Solvay Institute). Dollo was given membership in the Société des sciences de Lille and the Geological Society of London. Dollo also collaborated with his former professor, the French zoologist Alfred Giard and the Université Lille Nord de France.