The reactor is located in the the state of Idaho between the Idaho Falls and Arco. The construction was designed by Walter Zinn and Enrico Fermi at the Argonne National Laboratory.[5] The famous Italian physicist Fermi became next to his achievements on the projects, known for his contributions to the development of quantum theory, nuclear and particle physics, and statistical mechanics. On 2 December 1942 at 15:25 at the University of Chicago with the Chicago Pile No. 1 nuclear reactor he succeeded for the first time in carrying out a critical nuclear fission chain reaction, an achievement based on the theoretical preliminary work of Leó Szilárd.[7] The Argonne National Laboratory was the first of the national laboratories established by the Manhattan Project and there, Fermi was able to continue his work on experimental physics and investigated neutron scattering. When the Manhattan Project was replaced by the Atomic Energy Commission in 1947, they accepted the power plant project and two years later, construction work in the the semidesert of Idaho began.

The project’s objective was the demonstration of power generation and further nuclear research. The reactor’s core was able to be replaced and the coolant circuit as well as the primary and secondary circuit were powered by a liquid sodium-potassium alloy (NaK). The secondary circuit would transfer its energy in a heat exchanger into a water-steam-circuit that was finally able to power a combination of a generator and a turbine.

In August 1951, a first attempt failed because the reactor failed to provide the critical mass. However, the core was reconstructed and in December of the same year, a small amount of electric energy was ‘produced’. On day one, the energy lasted for only four light bulbs, but after a few days the reactor was able to provide the power for several research projects. The until then only theoretically assumed breeding process was achieved in 1953 for the first time. 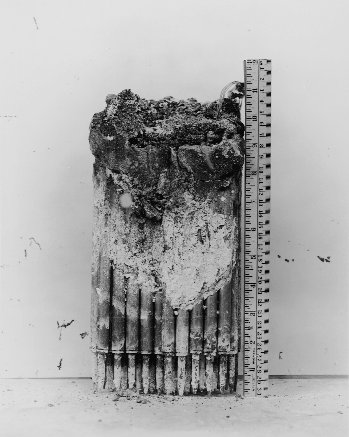 Experimental Breeder Reactor I. Core after the 1955 incident.

From Production, over Partial Meltdown to Closing Down the Reactor

During its overall runtime, the reactors core was changed four times. The first consisted of only 52 kg of highly enriched uranium in a very dense construction for the time. The nuclear fuel for the next two was enriched uranium combined with 2% zirconium. During the operation of the second core, a partial meltdown occurred in 1955, but its effects were limited to the core itself. The last was called Mark IV and was installed in 1962. It consisted of plutonium and was therefore globally the first reactor, ‘producing’ electrical energy from fission of plutonium and that produced more fuel atoms than consumed. The reactor was closed in 1964 and replaced by the Experimental Breeding Reactor II. Shortly after, the area was announced a National Historic Landmark and can be visited during the summer by the general public.