You are here: Home › mathematics › Gaspard Monge and his System of Descriptive Geometry 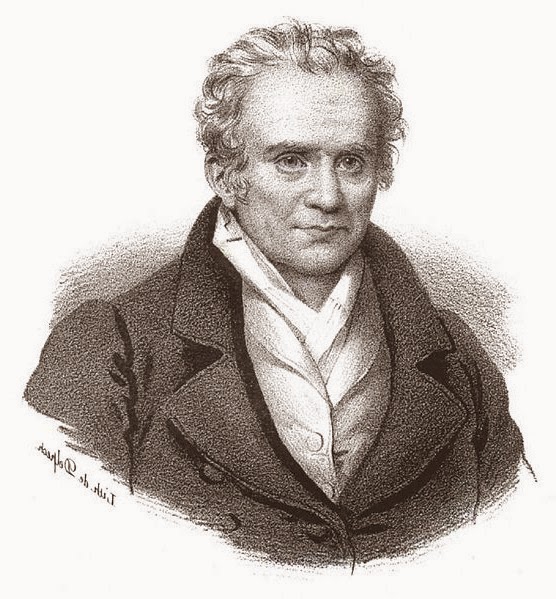 On May 10, 1746, French mathematician Gaspard Monge, Comte de Péluse was born. He is best known for being the inventor of descriptive geometry as the mathematical basis of technical drawing, and being the father of differential geometry. During the French Revolution Monge served as the Minister of the Marine, and was involved in the reform of the French educational system, helping to found the École Polytechnique.

“Descriptive geometry has two objects: the first is to establish methods to represent on drawing paper which has only two dimensions, – namely, length and width, – all solids of nature which have three dimensions, – length, width, and depth, – provided, however, that these solids are capable of rigorous definition.
The second object is to furnish means to recognize accordingly an exact description of the forms of solids and to derive thereby all truths which result from their forms and their respective positions. “
– Gaspard Monge From On the Purpose of Descriptive Geometry

Monge was born in Beaune in Burgundy, the son of Jacques Monge (* 1718), a merchant and street trader from Upper Savoy and Jeanne Rousseau (* ca. 1725). He was taught at the college of the Oratorians at Beaune.  This school offered a more liberal education than other religious schools, and so the emphasis was not only on the humanities, but also on history, mathematics and science. In 1762, at the age of 16, Monge went to Lyon, where he continued his education at the Collège de la Trinité. He continued his education there until 1764, when he returned to Beaune. When Monge was only 17 years old, he was appointed teacher of physics. He began to invent his own instruments in order to complete a large-scale plan of the city of Beaune. Monge’s work was very well received and it was displayed in the local library were it remained until today. A local engineer saw Monge’s masterpiece as well and he recommended the young scientist to the École Royale du Génie at Mézières where he started as a draftsman.

However, Monge was unfortunately not allowed admission to the institution itself. He became widely known for his great manual skills, but his mathematical skills were not yet discovered. After a year at the École Royale, Monge was asked to produce a plan for a fortification in order to optimize the city’s defense. Instead of calculating the problems, Monge found his solutions through drawings. At first his solution was not accepted, since it had not taken the time judged to be necessary, but upon examination the value of the work was recognized, and Monge’s exceptional abilities were recognized. Monge was appointed instructor in experimental physics in 1770 and in 1786 he wrote and published his Traité élémentaire de la statique. In 1780 he became a member of the French Academy of Sciences; his friendship with C. L. Berthollet began at this time.

The French Revolution and Descriptive Geometry

The French Revolution completely changed the course of Monge’s career. Gaspard Monge was known to be a very strong supporter of the French Revolution. He accepted the office of Minister of the Marine in 1792. When the Committee of Public Safety made an appeal to the academics to assist in the defence of the republic, he applied himself wholly to these operations, and distinguished himself by his energy, writing the Description de l’art de fabriquer les canons and Avis aux ouvriers en fer sur la fabrication de l’acier. Monge made great contributions in the establishment of the school for public works, later on the École Polytechnique. There, Monge was appointed professor for descriptive geometry and later on even director of the institute.

Gaspard Monge was one of the French scientists who pushed for the introduction of a system of weights and measures based on the decimal system. The decimal number had been introduced in Francia by Gerbert d’Aurillac, who became Pope around the year 1000 under the name of Sylvester II, but it had not yet been generalized to weights and measures. By the decree of 8 May 1790 obtained by Talleyrand, the Académie des Sciences was given the task of developing a system for unifying weights and measures. Gaspard Monge was part of the Central Weights and Measures Commission which was to implement this decision, with Condorcet, Laplace, Lagrange, and Borda. Another of Monge’s papers in the volume for 1783 relates to the production of water by the combustion of hydrogen. Monge’s results had been anticipated by Henry Cavendish.

In the following period, Monge joined Napoleon Bonaparte’s expedition to Egypt, taking part with Berthollet in the scientific work of the Institut d’Égypte and the Egyptian Institute of Sciences and Arts. In 1798 he examined the Fata Morgana in Lower Egypt for the first time. After Egypt, he followed Bonaparte to Syria and returned to France in 1798. After the second restoration he was removed from all offices in 1816 as a retaliatory measure and removed from the Institute’s list. Gaspard Monge passed away on 28 July, 1818 and in Beanue, a statue portraying him was erected a few years after.

The Father of Differential Geometry

Monge is considered the father of differential geometry because of his work Application de l’analyse à la géométrie, in which he introduced the concept of lines of curvature of a surface in 3-dimensional space. He developed a general method of applying geometry to problems of construction. He also introduced two planes of projection at right angles to each other for graphical description of solid objects. These techniques were generalized into a system called géométrie descriptive, which is now known as orthographic projection, the graphical method used in modern mechanical drawing. Monge also gave his name to a generic problem of transport theory, known as the Monge-Kantorovitch Problem (or MKP, for Monge-Kantorovich Problem), the latter having received the Nobel Prize for economics in 1975, and is known to have proved the existence of an optimal solution to this problem in 1942. His name is inscribed on the Eiffel Tower (number 54/72).

The Monge – Ampère equations, the Bergman kernel, and geometry (Lecture 5) by Kengo Hirachi, [13]