You are here: Home › art › The Surreal Dreams of Salvador Dalí 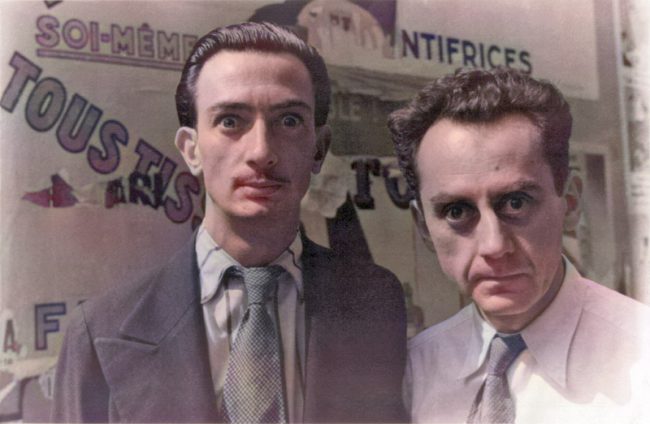 On May 11, 1904, Spanish surrealist artist Salvador Domingo Felipe Jacinto Dalí i Domènech, Marquis of Dalí de Púbol was born. As one of the main representatives of surrealism, he is one of the most famous painters of the 20th century. Around the year 1929 Dalí had found his personal style and genre, the world of the unconscious that appears in dreams.

“Someone like myself, who claimed to be a real madman, living and organized with a Pythagorean precision..”
– Salvador Dalí

Salvador Dalí was born in Figueres, Catalonia, the son of the distinguished notary Don Salvador Dalí y Cusí (1872-1952) and his wife Doña Felipa Domènech y Ferres (1874-1921). In Salvador, the bourgeois environment and a strict paternal upbringing gave rise to a strong need for security and a strong sense of order, which would determine his later life.  In primary school he was inattentive and lost in dreams. The six-year-old is said to have spent hours watching a neighbour, the hobby painter Juan Salleras, paint.  At the age of fourteen “art pompier”, genre painting of the 19th century, became the model for his painting attempts. Josep “Pepito” Pichot, a brother of Ramon Pichot, had recognized his talent for painting, and at his suggestion Dalí was allowed to take evening classes at the municipal drawing school. After only one year there he received a “diploma de honor”. After the end of the war in 1918, Dalí joined a group of anarchists and set his sights on developing a Marxist revolution. In June 1922 Dalí finished school with the Bachillerato (high school diploma).

Following a successful group exhibition at the Dalmau Gallery in Barcelona in January 1922, which included eight paintings by Dalí, his father sent him to study at the “Academia San Fernando” for painting, sculpture and graphics in Madrid, which he attended from October 1922. He moved into a room in the student residence “Residencia de Estudiantes”; among the students were Luis Buñuel and Federico García Lorca, a close friend with whom he shared the room for a time. To emphasize his artistry, Dalí dressed eccentrically with a large black felt hat, velvet jacket and floor-length cape, wore shoulder-length hair, sideburns, a pipe at the corner of his mouth and carried a stick with a gold-plated pommel.

Dalí, along with Lorca and Buñuel, devoted himself to the writings of the psychoanalyst Sigmund Freud,[1] calling psychoanalysis one of the main discoveries of his life. After a first one-year expulsion from the Academy in 1923, he was unjustly accused of being the leader of riots in Catalonia and was imprisoned from 21 May to 11 June. In 1924 Dalí returned to the academy. In April 1926 he travelled to Paris for the first time and met Pablo Picasso.[2] On October 20, 1926, he was expelled from the Academy by royal decree for disorderly conduct. He had refused to take part in the exams because he thought the teachers were incapable of judging him. After the early Impressionist phase, Dalí’s painting style now showed Cubist, Pointillist and Futurist influences. In 1927 and 1928 he wrote art-critical texts that already dealt with a surrealist theme such as Saint Sebastian. His first painting considered surrealist was Blood is Sweeter than Honey from 1927. The works Ana María and Sitting Young Girl from behind were exhibited at the Carnegie Institute in Pittsburgh in 1928.  In 1928 Dalí travelled to Paris for the second time. There he worked with Luis Buñuel on the scripts for the surrealist films Un chien andalou (An Andalusian Dog) in 1929 and L’Âge d’Or (The Golden Age) a year later. The screening of L’Âge d’Or led to a scandal, which was followed by a ban on screenings, and destroyed the friendship with Buñuel.

And then came Gala

“I am Surrealism.”
– Salvador Dalí

At the suggestion of Joan Miró, Dalí joined the group of Surrealists in Paris in 1929 and met, for example, Hans Arp, André Breton, Max Ernst, Yves Tanguy, René Magritte, Man Ray, Tristan Tzara and Paul Éluard and his wife, the Russian immigrant Helena, called Gala. Dalí fell in love with Gala, she gave in to the wooing of the ten years younger man and became his partner. Although Dalí claimed to be completely impotent and sexually inexperienced, he was bound to Gala all his life in lustful dependency. Dalí’s sexual obsessions are reflected in his paintings, for example in The Adjustment of Desires from the same year, which shows desires in the form of lion heads.[11] The couple married Gala’s after the divorce from Éluard in 1934, but the church wedding with Dalí was not performed until 1958, six years after Éluard’s death. Gala became his muse, she replaced his family, organized his exhibitions and conducted sales talks as his manager. She gave his life a change of direction, brought Narcissus Salvador out of his visions and gave him reality. They spent the years 1930 to 1932 together in Paris. With the increasing sales proceeds of his paintings they expanded their house in Portlligat, a combination of several former fishing cottages in a small bay near Cadaqués, which they had bought in 1930. It was thanks to Gala that Dalí became financially the most successful artist of his time.

The Persistence of Memory

In 1931 Dalí painted one of his most famous works, The Persistence of Memory, also called Melting Clocks. It shows four melting pocket watches arranged in the Catalan landscape in front of the rugged rocks of Cap de Creus. In 1954, Dalí took up the motif again and reworked the watch theme in dissolving the permanence of memory. In 1934 tensions arose between the communist-oriented surrealist group and Dalí; the dispute escalated because of Dalí’s painting The riddle of Wilhelm Tell, which shows a kneeling Lenin without trousers, with a greatly enlarged worker’s cap and a monstrous right buttock.

Because of the Spanish Civil War the Dalís left Portlligat in 1936 and traveled through Europe. For a while they lived in fascist Italy. The influence of the Renaissance paintings in the museums of Florence and Rome shaped his future works. Dalí’s paintings Soft Construction with Boiled Beans, Burning Giraffe and The Invention of Monsters, which were created at this time, reflect his observant but apolitical attitude. He saw the war as a natural-historical phenomenon, while Picasso’s Guernica shows it as a political event.[3] In London, Dalí received news of the sneaky assassination of his friend Federico García Lorca in August 1936 by Franciscan Falangists in Spain, which left him in severe depression.

In 1939 Dalí and Gala returned from the United States and lived for a short time in Arcachon, southern France, where many artists and intellectuals such as Marcel Duchamp and Leonor Fini had fled from Hitler’s troops. When France was occupied by German troops during World War II in 1940, Dalí and his wife left Europe; they travelled again to the United States and were received, along with other guests such as Henry Miller, at Caresse Crosby’s estate in Bowling Green, Virginia, where Dalí wrote his autobiography. Dalí stayed in the United States with Gala until 1948, living in New York and Pebble Beach, California.

1948 Dali returns to Europe with Gala. There he is engaged in science, religion and history. During this “classical period” Dali integrated motifs into his paintings which he picked up from popular science magazines. He is strongly interested in the great classical masters like Raphael, Vélasquez or the French painter Ingres. Dali comments on his change of style with the words: “To remain a surrealist forever is like painting eyes and noses all your life“. From 1950 Dalí spent at least one month a year at the luxury hotel Hôtel Le Meurice in the Rue de Rivoli, Paris, where he always occupied a suite on the first floor. He irritated guests and staff by ordering a flock of sheep to his suite and letting them catch flies in the park. The hotel, already appreciated by Queen Victoria, became even more famous through Dalí.

Dalí’s income allowed him and Gala to lead a life of luxury. In 1960, they hired a managing director for Dalí’s merchandising company, John Peter Moore, who became a multimillionaire in this job. From 1981 Dalí suffered from Parkinson’s disease with severe tremor. In 1984, Dalí suffered severe burns in a fire caused by a short circuit in his bedroom doorbell system. After this incident, his state of health no longer allowed him to engage in artistic activities. Salvador Dalí died of heart failure in 1989 at the age of 84.