You are here: Home › astronomy › Hans Lippershey and the Telescope 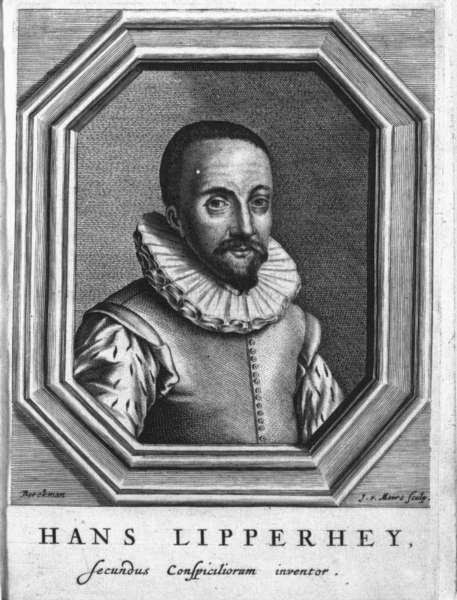 On October 2, 1608,  German-Dutch lensmaker Hans Lippershey applied to the States-General of the Netherlands for a patent for his instrument “for seeing things far away as if they were nearby”.

Even though scientists of the middle ages never heard of telescopes and most of them did not know specific laws of optics, they started laying the foundations for telescopes as we know them today. Before the invention of the telescope with lens optics, the view through a simple tube (a so-called telescope) was used to suppress stray light, so that individual celestial objects could be perceived more clearly. The effect has been known since antiquity. By that time, Ptolemy already published works on light refraction and reflection and so called ‘reading stones’ were used on top of written script for magnifying purposes. Only with the advent of spectacle lenses in the 13th century was it possible to build a telescope. The principle of lenses was known with spectacle lenses. At the beginning, however, the lenses used were still too imprecise to build a usable telescope with them. For the telescope lenses, very precisely machined lenses were required, which were not available in this way. Nicholas of Cusa is believed to have invented the usage of concave lenses around 1450.[6] From there, many scientists began using lenses and some even started thinking of telescopes. Robert Grosseteste was known to be one of them but it is not clear if he ever started building one. It is assumed that the principles of building telescoped were known during the 16th century, due to writing of for example John Dee.[7]

Printing and other Technological Improvements

It is interesting why the lenses suddenly became useful in the fading 15th century. This had a lot to do with the upcoming printing press, for which Gutenberg had given the impetus.[8] As the number of books in the bourgeoisie increased, so did the number of people who could read. Inevitably, the demand for vision aids for reading increased rapidly, which led to the breaking of the previously dominant Venetian (Italian) monopoly on the production of lenses and spectacles. For example, eyeglass makers now also settled in Nuremberg. The increased demand not only led to an expansion of spectacle grinding, but also to the development of new technologies. The quality of the lenses improved and made it possible at the end of the 16th century to use the material now available to build devices that could be used to look far into the distance.

Hans Lippershey and the Telescope

In the very early 17th century, telescopes caused public attention in Europe, especially the Netherlands. Credited with this achievement are Jacob Adriaanszoon, Zacharias Janssen and Hans Lippershey. Lippershey was born in Wesel, Germany, but moved to the Netherlands were he lived most of his life. He is now credited with the earliest recorded design for a refracting telescope in 1608. He was a spectacle maker, which was – as we have already stated – a rapidly growing business in this period. However, there are different stories on how he achieved his famous invention. Some state, that one of his assistants came up with the idea, others tell that children in his shop inspired him by playing with the lenses. Historians believe that his very first instrument was made of two convex lenses with an inverted image with a three times magnification. Back then these instruments were not known as telescopes but as ‘Dutch perspective glasses’ and Lippershey turned to the States-General on October 2, 1608 in order to patent his instrument “for seeing things far away as if they were nearby“.  Unfortunately, he failed the filing of the patent,  because he was not the only one who claimed to have made this invention. In addition to Hans Lipperhey, Jacob Metius from Alkmaar and Zacharias Janssen claimed to have invented the telescope. The dispute over the priority of the invention of the telescope was first presented in a book in 1655. The book is called De vero telescopii inventore (“On the true inventor of the telescope“) and was written by Pierre Borel. However, he received a good reward by the Dutch government for handing out copies of his construction.

“About ten months ago [1609] a report reached my ears that a certain Fleming [Hans Lippershey] had constructed a spyglass, by means of which visible objects, though very distant from the eye of the observer, were distinctly seen as if nearby… Of this truly remarkable effect several experiences were related, to which some persons gave credence while others denied them. A few days later the report was confirmed to me in a letter from a noble Frenchman at Paris, Jacques Badovere, which caused me to apply myself wholeheartedly to enquire into the means by which I might arrive at the invention of a similar instrument. This I did shortly afterwards, my basis being the theory of refraction. First I prepared a tube of lead, at the ends of which I fitted two glass lenses, both plane on one side while on the other side one was spherically convex and the other concave.”
– Galileo Galilei, The Starry Messenger (1610), trans. Stillman Drake, Discoveries and Opinions of Galileo (1957), 28-9.

Attempting to file the patent turned out to be a great idea even though it was not successful. Scientists across Europe heard about the ‘Dutch perspective glass’ and started experimenting themselves. One year later, Galileo Galilei [5] traveled to Venice, where he was told about the innovative device and started building a real telescope himself as soon as he returned to Padua. Having built improved instruments in the following weeks, Galileo came back to Venice where he demonstrated it and managed to rapidly improve his reputation, salary, and the term ‘Galilean telescope’ was furtheron used for the device originally designed by Lippershey.

At yovisto academic video search, you may enjoy a video lecture by Carolin Crawford on ‘Large Telescopes and why we need them‘