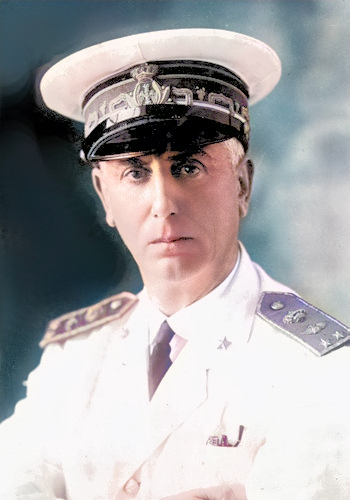 On October 26, 1877, Italian aviation pioneer Gaetano Arturo Crocco was born. He was the founder of the Italian Rocket Society, and went on to become Italy’s leading space scientist. As head of the School of Aeronautics of the University of Rome, he performed research on flight mechanics, structural design, and high altitude flight in addition to his work in rocket propulsion.

Crocco was the son of a Neapolitan engineer. He spent his childhood and youth in Palermo, from where his mother came. After graduating from a humanistic high school, he completed undergraduate studies in mathematics and physics at the University of Palermo. In 1897 he continued his education at the Artillery and Engineer College in Turin, and in 1900 he was commissioned as a first lieutenant in the Army Engineer Corps. In 1902, the military sent him for advanced training at the University of Liège in Belgium, from which he graduated at the top of his course. He turned down an offer of a job with the Westinghouse Electric Corporation and returned to Italy, where he first received a commission from the Navy.

While serving in the Italian Army Engineers Corps in the Wireless Dept. in 1898, he met Captain Mauro Maurizio Moris who was heading a Specialists Brigade and was deeply interested in the new field of aeronautics. Moris took Crocco in his staff around the time the Specialists Brigade was testing anchored balloons on the Bracciano Lake, north of Rome. By 1905, he had written twelve scientific papers on aerodynamics. With the pioneering officer Ottavio Ricaldoni, he built an airship in 1907, which flew for the first time the following year over Lake Bracciano and then over Rome. Along with Ottavio Ricaldoni, he had developed Airship 1 featuring a revolutionary semi-rigid flexible structure. Just two years later piloting an improved version of the airship, the N1, supplied with a rudder and direction indicators, Crocco flew from Vigna di Valle to Rome and back, covering 50 miles in one hour and a half. N1 became the first airship to fly over Rome at an altitude of 500 m. Gaetano Crocco and Rinaldoni among further scientists tested an hydroplane on the Bracciano lake, one of the other researchers was Umberto Nobile, who would eventually become a famous polar explorer.[3]

In 1908, Crocco founded the Istituto Centrale Aeronautico with Vito Volterra,[4] which later, in Guidonia Montecelio, became the Italian development center for aeronautical engineering. By 1914, Crocco had built three wind tunnels, one of which was designed for speeds of up to 200 km/h. In 1920, he retired from active military service as a colonel and joined the Ministry of Economy as director general and department head for industry. In 1926 he became a lecturer in aeronautical engineering at the University of Rome. There he worked first on solid-fuel rocket engines, then on liquid-fuel rockets and also on other types of propulsion. Reactivated as a general in 1928, he took over the technical department of the newly established Aviation Ministry. The following year, as a university professor in Rome, he was given the chair of general aeronautical engineering.

From Aeronautics to Astronautics

Throughout the years, Crocco moved onto researching liquid fuels and drawing plans for the first Italian-built combustion chamber which was tested with the help of his son, Luigi Crocco. He planned the military development center for aeronautical engineering at Guidonia Montecelio, which opened in 1936 and was named after the aviation pioneer Alessandro Guidoni, who died in an accident there. From 1936 to 1945 and from 1948 to 1952, Crocco was Dean of the Faculty of Aeronautical Engineering at the University of Rome. However, World War II changed his plans. Crocco directed the Aeronautic Engineering School from 1935 to 1942 and again from 1948 and 1952. During his time there, he managed to publish hundreds of papers and patented numerous inventions. His students were so astonished by Crocco‘s achievements that they developed the saying “Everything I use or see, Oh my Crocco is made by thee.” Gaetano Crocco went back to his research on missles and astronautics after World War II and created an informative course on superior ballistics within the Aeronautic Engineering School. 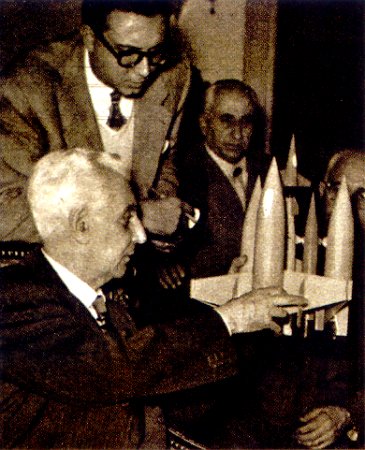 The Italian Rocket Association was founded in 1951 by Gaetano Crocco to rally all the fans of the new astronautic science. About a decade before Gagarin’s space flight, Crocco held a meeting to discuss the problems of a manned spaceship re-entry in the atmosphere and later on also devised a parallel-stages vector, a futuristic solution as compared to superimposed stages. However, his probably most important contribution to the field of astronautics was published when Crocco was already 80 years old: “One-Year Exploration-Trip Earth-Mars-Venus-Earth”. In his paper, Gaetano Crocco suggested exploiting the Mars and Venus gravitational fields as propelling forces to cut dramatically the travelling time of a space capsule. His theory of now known as ‘gravitational slingshot‘ or ‘swing by‘. Crocco presented his paper at the Seventh Congress of the International Astronautical Federation IAF, Rome, in 1956.

Also because of Crocco’s early efforts in astronautics, Italy orbited its first satellite, the San Marco, in 1964. Gaetano Crocco died at the age of ninety in Rome on January 19, 1968. Asteroid 0606 Crocco and Crocco crater on the far side of the Moon are named for him.