You are here: Home › physics › Karl Schwarzschild and the Event Horizon 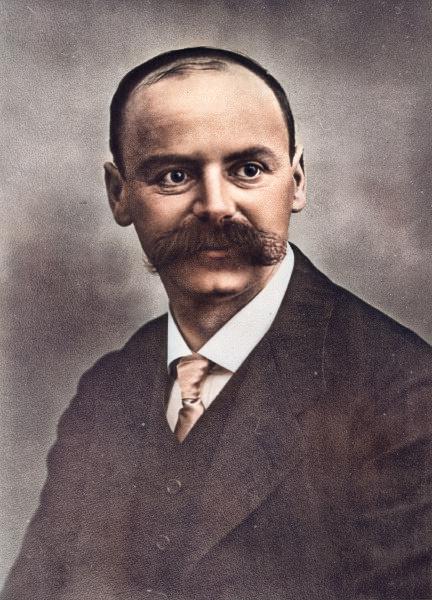 Karl Schwarzschild was born in Frankfurt (Main), Germany as the eldest of six children of a wealthy German-Jewish family (but was later baptized). Karl grew up in a cultivated upper middle-class environment in which various interests (including music and art) were cultivated. It has been delivered that Schwarzschild was a child prodigy, who published his first paper on celestial mechanics and constructed his own telescope before his 17th birthday. In Frankfurt he first attended the Jewish elementary school and then the Städtische Gymnasium, where his early interest in astronomy was aroused. Already at the age of 16 he published two papers on the orbit determination of planets and double stars in the Astronomische Nachrichten. After graduating from high school as the best of his year, he studied astronomy at the University of Strasbourg from 1890. In 1892 he moved to the Ludwig-Maximilians-Universität in Munich, where he received his doctorate in 1896 under Hugo von Seeliger on the subject of the formation of equilibrium figures in rotating liquids.

Work in Vienna and Munich

Schwarzschild was then appointed as an assistant at the Von Kuffner Observatory in Ottakring, a suburb of Vienna, where he stayed until 1899. During his time in Vienna, Schwarzschild worked on ways to determine the apparent brightness of stars using photographic plates. While lecturing in Munich as Privatdozent, the scientist noticed a significant difference between the measured photographic magnitudes and the tabulated visual magnitudes. He concluded that the effect was due to the different colors of the stars and the range of magnitude change as measured by his photographic methods was greater than the range of change in visual magnitude. He further concluded that this effect is caused by the changes in surface temperature of the variable star through its cycle. [3]

Göttingen and the Schwarzschild Metric

In the 1910s, Schwarzschild was appointed professor at the prestigious University of Göttingen, where he met and worked with important contemporary scientists including David Hilbert and Hermann Minkowski. Also, Schwarzschild became director of the Göttingen observatory. The scientist was appointed director of the Astrophysical Observatory in Potsdam, the most prestigious post available for an astronomer in Germany at that time and joined the German army with the outbreak of World War II. Still, he somehow managed to write several papers in 1915, two on relativity theory and one on quantum theory. Schwarzschild is now credited with producing the first exact solutions to Albert Einstein’s field equations as well as the Schwarzschild metric. [2]

In Schwarzschild’s solution, a radius for a given mass is identified, also known as the Schwarzschild radius. If the mass could be compressed to fit within that radius, no known force or degeneracy pressure could stop it from continuing to collapse into a gravitational singularity or black hole. This means that where the radius of the body is less than its Schwarzschild radius, everything falls inevitably into the central body. When the mass density of this central body exceeds a certain limit, it triggers a gravitational collapse to a Schwarzschild black hole, known as a non-charged, non-rotating black hole. However, the possibility of black holes were in general not accepted until the second half of the 20th Century, and Schwarzschild himself did not believe in the physical reality of black holes, believing his theoretical solution to be physically meaningless. [2]

In 1910 Schwarzschild was elected a member of the Leopoldina, and in 1912 he became a member of the Prussian Academy of Sciences. He was an honorary member of the Physical Society. When the First World War broke out in 1914, he volunteered for the army. He served in the artillery troops on the eastern and western fronts, where he had to carry out ballistic calculations, among other things. During the war, however, he fell seriously ill with an autoimmune skin disease (Pemphigus vulgaris) and returned from the front as an invalid in March 1916. He died two months later at the age of 42.