You are here: Home › astronomy › To be or Not to be a Planet – Eris, the planet of Discord 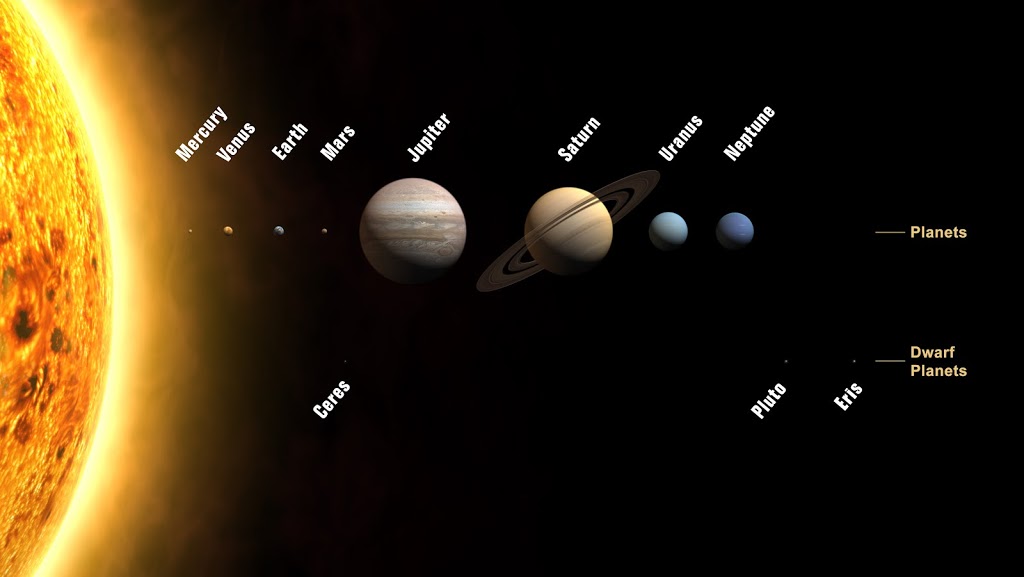 Planets and Dwarf Planets of the Solar system, including Eris

On October 21, 2003, a photograph of the nocturnal sky was taken, where almost 2 years later, in January 2005, evidence was raised that there might be a 10th planet at the borders of our solar system: Eris, located in the Kuiper Belt and named after the Greek goddess of discord. And discord it should be, because Eris as a planet is rather small and astronomers were arguing, whether it is a planet at all. The end of the story resulted in loosing another planet of the solar system. Pluto lost its status as a planet furthermore also be called only a ‘dwarf planet’ like Eris.[1] 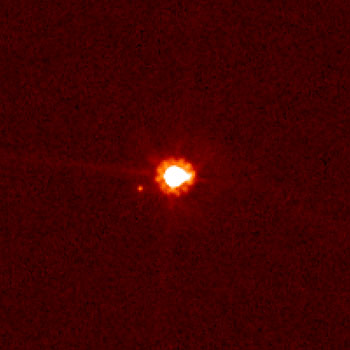 The Discovery of Eris

Up to today, (136199) Eris is the most massive and second largest dwarf planet in the solar system after Pluto. Eris belongs to the Plutoids, a subclass of dwarf planets that orbit the sun beyond the Neptune orbit. That Eris was discovered was mainly due to good luck after all. Using the 1200 mm Samuel Oschin telescope in California, Eris’ image was taken in 2003 but due to the dwarf planet’s very slow motion around the Earth it was not detected yet. The team used an image search software and programmed it to exclude all objects moving slower than 1.5 arcseconds per hour in order to reduce the number of false positives. Only a re-analysis could reveal Eris’ existence in 2005.

To be of Not to be a Planet…

Soon after its discovery, many research efforts have been accomplished in order to classify and specify the then unknown object. NASA initially described Eris as the tenth planet due to the fact that it may be larger than Pluto. However, the International Astronomical Union named a group of experts designated to find an exact definition for planets. As a result neither Eris nor Pluto could be classified as planets and from then on counted as ‘dwarf planets‘.

Eris depicts the most distant known natural object in our solar system. After many and long lasting discussions about its size, most scientists finally came to the conclusion that Eris has about the same size but is about 27% more massive than Pluto. Also its surface may be quite similar to Pluto’s, after observations with the Gemini North Telescope located in Hawaii, astronomers revealed the presence of methane ice and measured the presumably grey appearing dwarf’s temperature at about -243 to -217 degrees Celsius.

On November 5, 2010, the size of Eris during transit in front of a star was determined. Eris has a diameter of 2326 ± 12 kilometres, is largely spherical in shape and was therefore considered somewhat larger than Pluto, whose diameter was estimated at 2306 km. A solar orbit of Eris lasts about 556½ years. The orbit is, not unusual for an object of the Kuiper belt, highly eccentric (numerical eccentricity 0.44). The perihelion of its orbit is 37.7 AU. It can temporarily be closer to the sun than Pluto, whose aphelion is 49 AU. In 2017, Eris was about 96.2 AU away from the Sun, close to the aphelion of its orbit, which is 97.6 AU. This corresponded to a distance of about 13.5 light hours. It is noticeable that the orbit of Eris is inclined by 44° to the ecliptic, which is quite unusual for a body of this size and probably delayed the discovery.

After its discovery, the IAU awarded Eris the provisional designation 2003 UB313, which follows the usual rules for naming asteroids and only expresses in code that Eris was discovered in the second half of October (U) of 2003, in the order of 7827th found object (B313). The group of discoverers first named Eris internally and unofficially “Xena” and her moon “Gabrielle” after two role names from the TV series “Xena: Warrior Princess”. In September 2006 2003 UB313 received the minor planet number 136199.[6] This was followed by the assignment of the permanent name: Since 13 September 2006 2003 UB313 bears the name Eris, her moon the name Dysnomia, after the Greek goddess of lawlessness, who was also the daughter of Eris.

Unlike Pluto or Ceres [2], Eris, like most dwarf planets, has no official or commonly used astronomical symbol. Since the moon Dysnomia has about the 500th part of the luminosity of Eris, the diameter should be about 100 kilometers. If the albedo of Dysnomia were much smaller than that of Eris, the diameter could be up to 250 kilometres. Dysnomia takes about 16 days to orbit the dwarf planet, its distance to it is about 37,000 kilometres.

Mike Brown, Pluto, Eris, and the Dwarf Planets of the Outer Solar System, [8]