You are here: Home › music › Richard Wagner – Genius and Megalomania 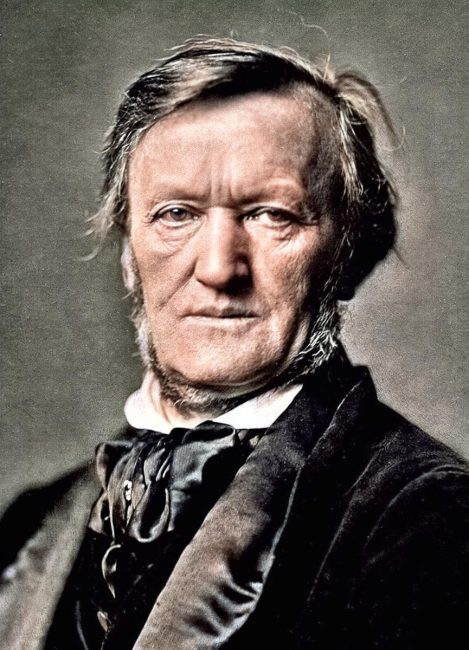 On May 22, 1813, German composer, theatre director, polemicist, and conductor Richard Wagner was born. His compositions, particularly those of his later period, are notable for their complex textures, rich harmonies and orchestration. His music is characterized by elaborate use of leitmotifs, i.e. musical phrases associated with individual characters, places, ideas or plot elements. His advances in musical language greatly influenced the development of classical music and made way to modern music. And of course, Wagner counts to the most important German composers. However, opinions about Wagner tend to differ sharply. Either nearly unconditional worship or irrepressible aversion. Myself, I’m somehow in between. On the one hand, I deeply admire his works, although there are beyond my comprehension. On the other hand, I can’t tolerate many of his opinions and especially I don’t like the rites how many people are celebrating their ‘Maestro’, esp. in Bayreuth.

“The oldest, truest, most beautiful organ of music, the origin to which alone our music owes its being, is the human voice.”
– Richard Wagner, Opera and Drama (1851)

The Early Life of Richard Wagner

Richard Wilhelm Wagner was born in Leipzig, Germany, as the ninth child of Carl Friedrich Wagner, a clerk in the Leipzig police service, and his wife Johanna Rosine, the daughter of a baker. Unfortunately, Wagner’s father died of typhus only six months after Richard’s birth, after which Johanna began living with Carl’s friend, the actor and playwright Ludwig Geyer in Dresden. Until Richard Wagner was age 14, he most likely had no idea that Geyer was not his biological father, because he was only known by the name Richard Wilhelm Wagner. Young Richard Wagner entertained ambitions to be a playwright, and first became interested in music as a means of enhancing the dramas that he wanted to write and stage. He soon turned toward studying music, for which he enrolled at the University of Leipzig in 1831. One of his early musical influences was Ludwig van Beethoven. In January 1828 he first heard Beethoven’s 7th Symphony and then, in March, the same composer’s 9th Symphony.[5] Wagner even wrote a piano transcription of the 9th Symphony, whereas he was also greatly impressed by a performance of Mozart’s Requiem.[6]

In 1833, at the age of 20, Wagner had finished composing his first complete opera, Die Feen (The Fairies), which would go unproduced until half a century later. Meanwhile, Wagner held brief appointments as musical director at opera houses in Magdeburg and Königsberg, during which he wrote Das Liebesverbot (The Ban on Love), based on William Shakespeare’s Measure for Measure, which was more or less a disaster. On November 24, 1836, Wagner married actress Christine Wilhelmine ‘Minna’ Planer, but only a few weeks afterward, Minna ran off with an army officer who left her penniless. Wagner accepted her back, but it was the start of a troubled marriage. Throughout thirty years of marriage, for the most part, their relationship was estranged. 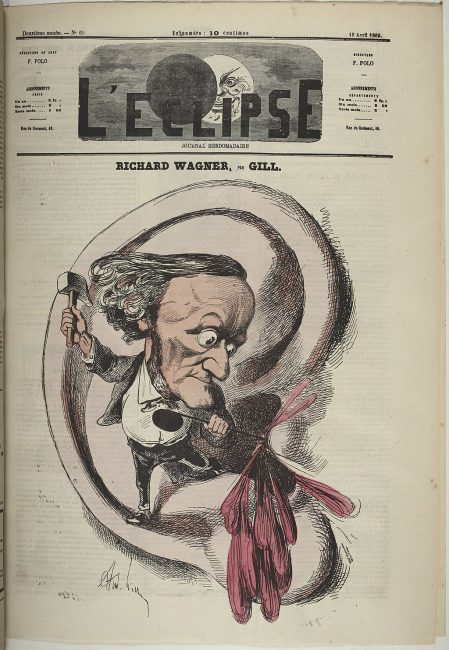 In 1840, Wagner completed his third opera, Rienzi, which was accepted for performance by the Dresden Court Theatre. In 1842, Wagner and his wife moved to Dresden to live there for the next six years, eventually being appointed the Royal Saxon Court Conductor. During this period, he wrote and staged Der fliegende Holländer and Tannhäuser, the first two of his three middle-stage operas. Convinced of his greatness, he continued composing and conducting, but meeting with little success. Eventually he became involved with the Dresden revolutionary uprising of 1849, the outcome of which made him a wanted political criminal, and he fled to Switzerland.

During this time Wagner was continually composing operas and finding his mature style. He envisioned the creation of the “total art work”: a conception of a music drama based on classic Greek principles, in which there would be a unity of music, drama, text, design, and movement. The subject matter of these works were to be the indigenous myths and legends of the German people. In 1853 Wagner formally began composition on the Rheingold, the first opera of ‘The Ring’ cycle, followed by serious work on the Walküre (part 2 of the Ring cycle), which was finished in 1856. At this time he was toying with the notion of writing the drama Tristan and Isolde. In 1857 he finished the composition of Act II of Siegfried (part 3 of The Ring cycle).

In his private life, Wagner should find a soulmate in the form of Cosima Liszt, the young daughter of the composer Franz Liszt.[7] Wagner and Cosima first met in 1853 when she was just 16. When they finally fell in love in 1864, Cosima was 27 and married, while Wagner was already at age 51 and still married to Minna. After Minna’s death in 1866 and after Cosima was able to obtain a divorce from her husband, Wagner and Cosima finally married on August 25, 1870. In 1862, Wagner was granted full amnesty and received permission to reenter Germany again (except for Saxony).

A Shrine for his Legacy

“I fixed my mind upon some theatre of first rank, that would some day produce it, and troubled myself but little as to where and when that theatre would be found.”
– Richard Wagner, Autobiographical Sketch (1843)

That year he began the music for Die Meistersinger von Nürnberg (The Mastersingers of Nuremburg), which was completed in 1867 with the first performance taking place in Munich the following year. Only then did he pick up the threads of the Ring cycle and resumed work on Act III of Siegfried, followed by the final piece, Götterdämmerung, which was finished in 1874. The first entire Ring cycle ( Rheingold, Walküre, Siegfried, and Götterdämmerung ) was given at the Festspielhaus in Bayreuth, the shrine Wagner built for himself, in 1876, over thirty years after the idea for it had first come to mind. He should finish one more opera, Parsifal, his final drama, in 1882, before he died on February 13, 1883, in Venice, Italy.

Like hardly any other artist Wagner has polarized, and up to the present day interpreters of different disciplines are engaged in his multi-layered work. In addition to composers who rejected Wagner, such as Brahms and Tchaikovsky, there were critics such as Nietzsche – and later Adorno – who not only pointed out the dangers of the “bewitching intoxication”, but also dealt with Wagner’s effects on the music of the future, indeed on the entire culture. Wagner’s innovations in harmonics influenced the development of music up to the modern age. With his writing Das Judenthum in der Musik he is one of the obsessive advocates of anti-Semitism.