You are here: Home › transportation › Mixing Up a Plane with a Train – Franz Kruckenberg’s Schienenzeppelin 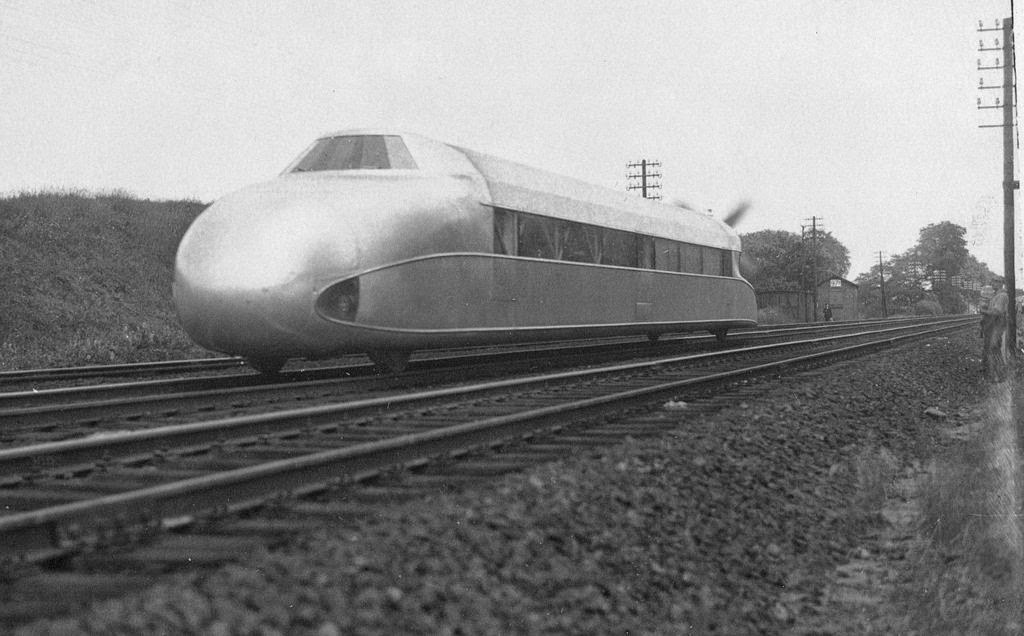 On 21 June 1931, Franz Kruckenberg’s Schienenzeppelin (rail zeppelin) set a new world railway speed record of 230.2 km/h (143.0 mph) on the Berlin–Hamburg line between Karstädt and Dergenthin, which was not surpassed by any other rail vehicle until 1954.

How to build faster Trains?

The famous Schienenzeppelin was anticipated by the design of the Aerowagon, an experimental Russian high-speed railcar fitted with an aircraft engine and propeller traction invented by Valerian Abakovsky, a Soviet engineer from Latvia. It produced speeds of up to 140 kilometres per hour. The railcar from Germany was built in 1930 near Hannover by German aircraft engineer Franz Kruckenberg and finished in fall of the same year. It was about 15 m long and had two axles. Originally, the railcar had two conjoined BMW petrol aircraft engines powering a four bladed propeller. The body of the Schienenzeppelin was streamlined, having a great resemblance to the era’s popular Zeppelin airships, and it was built of aluminum in aircraft style to reduce weight.[3] The railcar could carry up to 40 passengers and its interior was designed in Bauhaus-style.[4] On May 10, 1931 the railcar reached speeds of 200 km/h for the first time and this achievement was reported across the German media immediately. The great success on June 21 was achieved with Kruckenberg steering the rail zeppelin himself and afterwards, the vehicle was displayed in Berlin. This was an unprecedented speed for the Reichsbahn (twice the speed of express trains of the time), which is why all possible safety measures were taken, including the closure of all level crossings.

The End came Faster than Anticipated…

In 1932 Kruckenberg began a new project with the rail car involving significant modifications. It was given a completely new front end while the rear axle remained as it was. The aircraft engine was still used, but the power transmission was hydraulic through two Föttinger Fluid Drives for both directions of travel. Also, a pointed fairing was installed in place of the propeller. Kruckenberg completed this design in November 1932. During test drives in 1933, the new railway reached speeds of 180 km/h. Even though, Kruckenberg’s designs never really went into ‘mass’ production, his designs found their way into later DRG railcar designs. His last version of the rail vehicle was produced in 1934 and it was sold to the Deutsche Reichsbahn (German Imperial Railway) and dismantled in in order to re-use its material for military purposes. In 1942, the company Luftschiffbau Zeppelin presented plans for four-storey so-called rail zeppelins as part of the broad-gauge railway designed by Adolf Hitler himself from May 1942 until the last days of the Second World War in 1945.

Considered Too Dangerous for Passengers

A disadvantage of the rail zeppelin was that it could only be used as a single vehicle and train formation was not possible. This meant that adjustments to different travel volumes were not possible. Its much higher speed also made it difficult to use the zeppelin on routes that were used by other trains at the same time. An auxiliary drive powered by batteries was necessary for shunting trips. Reversing was not possible at all with the fixed propeller, so the Rail Zeppelin was a one-way vehicle and required turntables or track triangles for turning. If these were not available, long and complicated turning trips were sometimes necessary. Safety critical for passengers on the platforms (also in passageways) and passers-by, for example at level crossings, were also the strong current of the propeller and the danger of stones being whirled up. These disadvantages were one of the reasons why the project did not progress beyond the experimental stage. However, the Russian Aerowagon as well as the German Schienenzeppelin were precursors to the American M-497 Black Beetle railcar and the Soviet turbojet train, all three of them being experimental vehicles featuring the combination of railcar and aircraft engine. 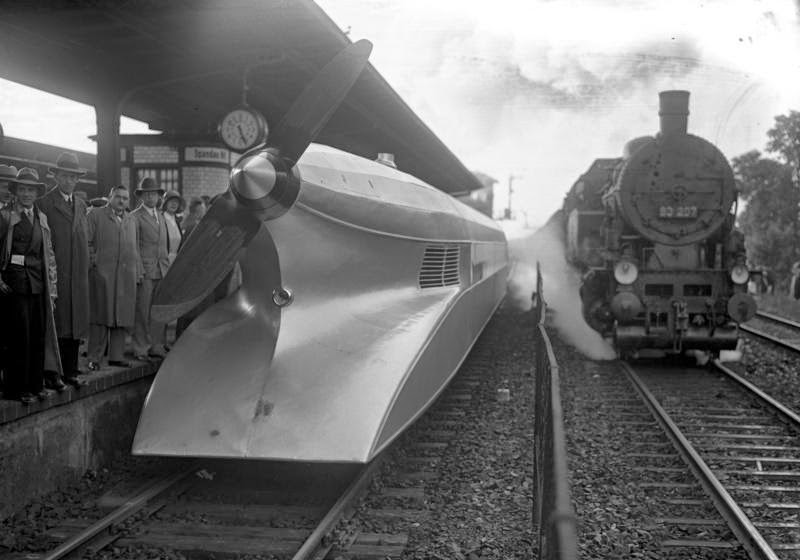 After the rail zepellin, Kruckenberg and Stedefeld developed the equally groundbreaking SVT 137 155. This prototype of a three-car multiple unit train featured a power car and diesel-hydraulic propulsion. During a test run on June 23, 1939, the train set a new speed record of 215 km/h on the Hamburg-Berlin route. In 1949, the Karlsruhe Institute of Railways and Roads tested Kruckenberg’s concept of a levitation zeppelin, which envisioned connecting all major European cities by a propeller-driven suspension railroad. The cars were to have a capacity of 80 passengers and reach a speed of 300 km/h. Franz Kruckenberg died at the age of 82 in Heidelberg in 1965.