You are here: Home › engineering › William Hedley – Puffing Billy and the Rise of Railway Transportation 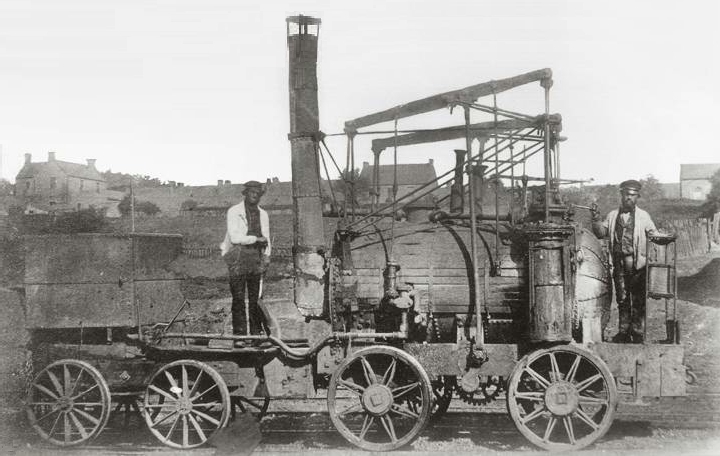 On January 9, 1843, British coal-mine official and inventor William Hedley passed away. Hedley was probably the first to build a commercially useful steam locomotive dependent on friction between wheels and rails as opposed to using a geared track. In 1813, he constructed the famous Puffing Billy, the world’s oldest surviving steam locomotive.

There have been ruts to guide carts on roads since prehistoric times. The development that led to the railway, however, did not take place on public roads, but in mining, where there were lorries running on wooden tracks since 1530 at the latest. By the end of the 18th century, the English mining industry was developing a system with track-guided wheels. The beginning of the history of the railway in today’s sense is the year 1804, when Richard Trevithick put the first steam locomotive into operation. James Watt, a Scottish inventor and mechanical engineer, greatly improved the steam engine of Thomas Newcomen, hitherto used to pump water out of mines. Watt developed a reciprocating engine in 1769, capable of powering a wheel. Although the Watt engine powered cotton mills and a variety of machinery, it was a large stationary engine. It could not be otherwise: the state of boiler technology necessitated the use of low pressure steam acting upon a vacuum in the cylinder; this required a separate condenser and an air pump. Nevertheless, as the construction of boilers improved, Watt investigated the use of high-pressure steam acting directly upon a piston. This raised the possibility of a smaller engine, that might be used to power a vehicle and he patented a design for a steam locomotive in 1784. His employee William Murdoch produced a working model of a self-propelled steam carriage in that year. 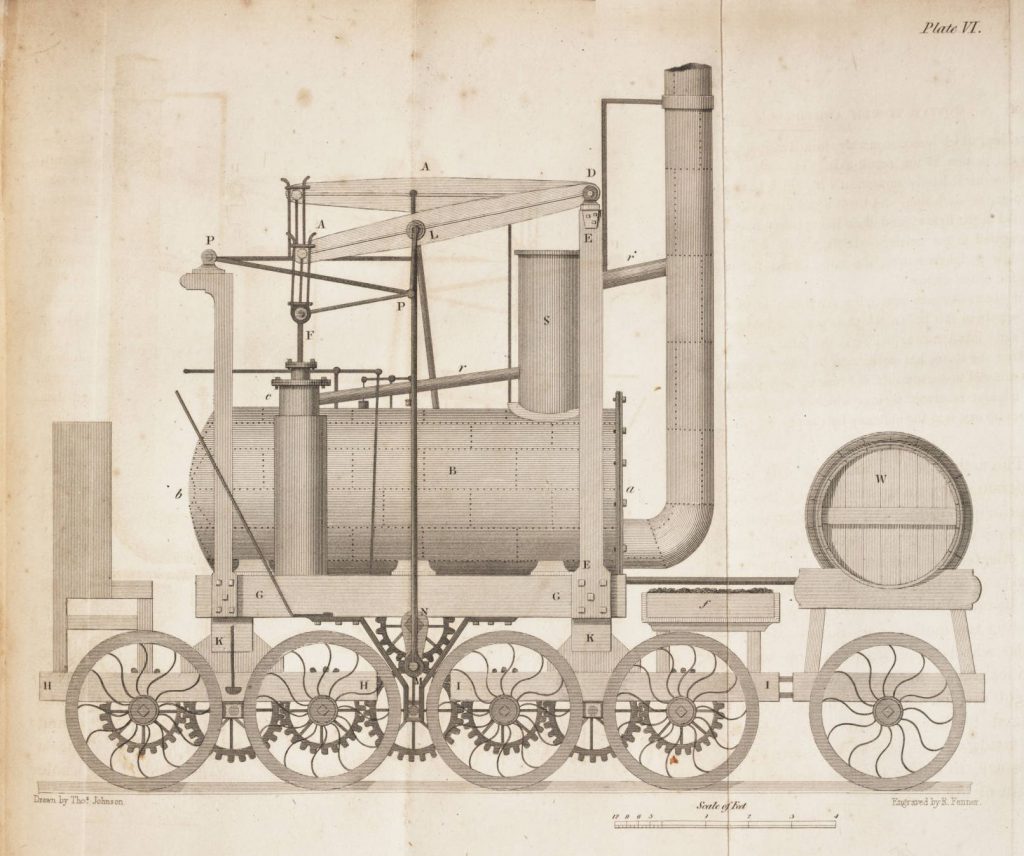 William Hedley was born in Newburn, near Newcastle upon Tyne and became one of the leading industrial engineers of the early 19th century. Before his time, locomotives were just too heavy for the track. William Chapman at the Butterley Company in 1812, attempted to use a steam engine which hauled itself along a cable and Brunton had produced the even less successful ‘mechanical traveller‘, or Steam Horse. Around 1812, Matthew Murray and John Blenkinsop produced the (probably) very first twin twin cylinder steam locomotive, Salamanca, for Middleton Colliery railway near Leeds. They used a pinion engaging with teeth along the iron edge rails track and while this became the first steam locomotive railway to work successfully, the system was just too complex and expensive to be used widely.

As early as 1800, at the age of 21, William Hedley became mining director at the Walbottle colliery, but soon switched to the Wylam colliery. As early as 1804, an attempt was made there to replace the equestrian operation on the approximately eight-kilometre-long sliding track with the use of coal-fired steam locomotives. Richard Trevithick, who was employed for this purpose, built a functioning locomotive whose load, however, could not withstand the cast-iron rails common at the time.William Hedley began to realize that if the pairs of wheels were connected, as with Richard Trevithick’s engines, if one pair began to slip, it would be counteracted by the other. Since the mine owner Christopher Blackett just replaced the wooden waggonway with iron flanged ‘L’ section plate rails, Hedley began to construct a test carriage, which was operated by manpower, in order to test the adhesion under various loads. Hedley proceeded to use it as the chassis for a locomotive constructed to Trevithick‘s pattern with a single cylinder and a simple straight through fire tube to the boiler. Unfortunately, the engine was not good enough as it was only a single cylinder and produced insufficient steam.

Hedley became famous after 1813 for his own development of one of the first steam locomotives, the Puffing Billy, which he built together with Timothy Hackworth, the later engineer of the Stockton and Darlington Railway. The Puffing Billy was built between 1813 and 1814 and again rebuilt one year later. Even though the sources and not too clear on the topic, in the September 1814 edition of Annals of Philosophy two locomotives with rack wheels are mentioned – Matthew Murray‘s Salamanca and George Stephenson‘s Blücher –, then there is mention of another “steam locomotive at Newcastle, employed for a similar purpose [hauling coals], and moving along without any rack wheel, simply by its friction against the rail road”. From the context this is at a different location to Blücher, so it is probably Puffing Billy.

The locomotive contained several new features, which were patented by Hedley. Puffing Billy had two vertical cylinders on either side of the boiler, and partly enclosed by it, and drove a single crankshaft beneath the frames, from which gears drove and also coupled the wheels allowing better traction. However, the engine also had some downsides. It was running on cast iron Wagonway plates wherefore its eight-ton weight was too heavy and broke them, encouraging opponents of locomotive traction to criticise the innovation. This was later improved by a redesign helping to spread the weight better. The engine was eventually rebuilt as a four-wheeler when improved edge rails track was introduced around 1830. It was not particularly fast, being capable of no more than 8 km/h. Due to Puffing Billy’s success, a second engine Wylam Dilly, was built  in 1815, which is now in the Royal Museum in Edinburgh.

Puffing Billy was an important influence on George Stephenson, who lived locally, and its success was a key factor in promoting the use of steam locomotives by other collieries in north-eastern England. William Hedley died in 1843 at Burnhopeside Hall, near Lanchester and was buried at Newburn parish church.