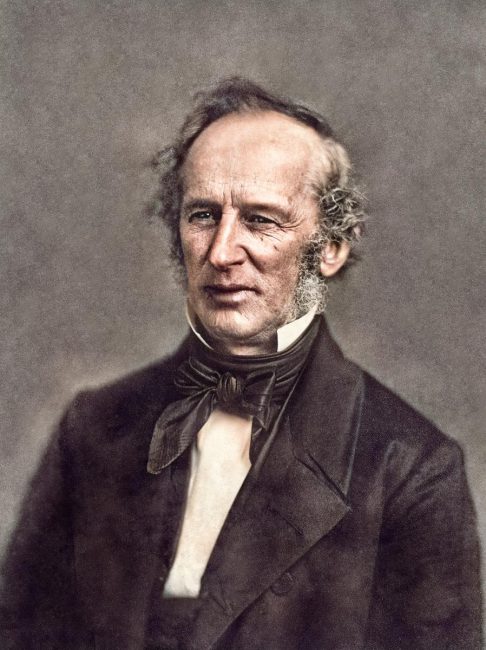 On May 27, 1794, American business magnate and philanthropist Cornelius Vanderbilt was born. Vanderbilt’s wealth was build on railroads and shipping. He was also the patriarch of the Vanderbilt family and one of the richest Americans in history.

“Let them do what I have done.”
– Cornelius Vanderbuilt

Cornelius Vanderbilt was born as the fourth child and second son of Cornelius and Phebe Vanderbilt (née Hand). Vanderbilt left school at the age of eleven. At the age of 16, he bought a sailing ship with a parental grant to open a ferry service between Staten Island and New York. Soon he was able to build up a small fleet of boats. In the war of 1812 he supplied some forts of the United States Army near the New York harbour with food. At the age of 20 he married his cousin Sophia Johnson. The couple moved to New York, where Vanderbilt and his brother-in-law De Forrest built a larger schooner, the Charlotte. The ferry entrepreneur Thomas Gibbons asked Vanderbilt to captain his steamboat in 1817 between New Jersey and New York and Vanderbilt became Gibbons’s business manager.

In 1818, Vanderbilt sold his boats. Soon he met the wealthy Thomas Gibbons and was hired by him as a steamship captain with an annual salary of 1,000 dollars.In this position, he fought against the monopoly granted by the New York State Legislature to Robert Livingston and steamboat designer Robert Fulton.[6] After their death, the license was given to Aaron Ogden to run a ferry between New York and New Jersey. Gibbons proceeded to undercut prices to ‘fight’ him. He also brought a landmark legal case to the United States Supreme Court to overturn the monopoly. Thomas Gibbons was a major influence to Cornelius Vanderbilt as he learned how to handle a complex business like this. He studied law to be able to represent Gibbons in important meetings. For 12 years Vanderbilt drove for Gibbons. Then he had enough savings to open his own shipping line. Even Gibbons’ offer to increase his salary by 5,000 dollars could not keep him. He was now 35 years old and was striving for independence. 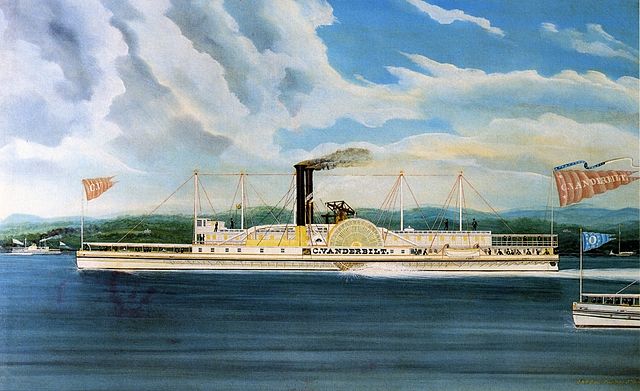 In 1829 Cornelius Vanderbilt founded his own steamboat company. Cornelius Vanderbilt put more and more energy into his own business on the side, especially after the death of Gibbons. Step by step he was able to acquire more and more lines until he encountered another competitor named Daniel Drew. However, it is assumed that Vanderbilt secretly became Drew’s business partner for several decades in order to avoid competing each other. As Cornelius Vanderbilt was slowly starting to dominate the steamboat business, he decided to take over the management of the connecting railroads as well. In 1847, he took over the presidency of Stonington, the first railroads he would head.

Only two years later, the Gold Rush began in California and Vanderbilt switched from regional steamboat lines to ocean-going steamships.[4] In the 1850s, Cornelius Vanderbilt went through several issues with competitors and allied turning away from him, resulting in the loss of several lines. In 1848 he secured for twelve years with the American atlantic and pacific ship canal company the exclusive transit rights by sea from San Juan del Norte on the Caribbean coast, which at that time was still called Greytown, through the Río San Juan over Lake Nicaragua over land to San Juan del Sur on the Pacific. This route was about one week shorter than via Panama and some months shorter than around Cape Horn. As usual, Vanderbilt undercut its competitors’ fares. Passengers and cargo were transported by ship from New York to the Nicaraguan Atlantic coast and further over the Río San Juan to Lake Nicaragua. After a short overland journey by coach to the Pacific coast, the onward transport took place by ship to the American west coast.

1856/1857 the Vanderbilt was built by Jeremiah Simonson in Greenpoint, Long Island. It was used in Vanderbilt’s North Atlantic Mail Steamship Line as a mail and passenger steamer. When the civil war broke out, Vanderbilt offered his flagship to the American Navy, and she was taken over on 24 March 1862. She was equipped with 15 guns. From November 1862 to January 1864, the USS Vanderbilt sailed from Hampton Roads, Va., on a mission to intercept the Confederate Alabama, which caused heavy losses under the Union’s merchant fleet. For this and other support during the war, Vanderbilt was awarded a gold medal by Congress. The medal is the highest award a civilian can receive. From then on he was called Commodore.

In the 1860s, Vanderbilt went to Canada where he got married a second time and donated a great amount of money to Ontario’s university. After the American Civil War, Vanderbilt invested in the expansion of the railway network and soon had the most important railway lines in the USA at his disposal. In 1873 he opened the first railway connection from New York to Chicago. Railway construction was accompanied by an increasing expansion of industry, which made it possible to do business on an ever larger scale. He passed away on January 4, 1877. In the 1990s, he was inducted into the North America Railway Hall of Fame, recognizing him for his significant contributions to the railroad industry.