You are here: Home › mathematics › Hermann Minkowski and the four-dimensional Space-Time 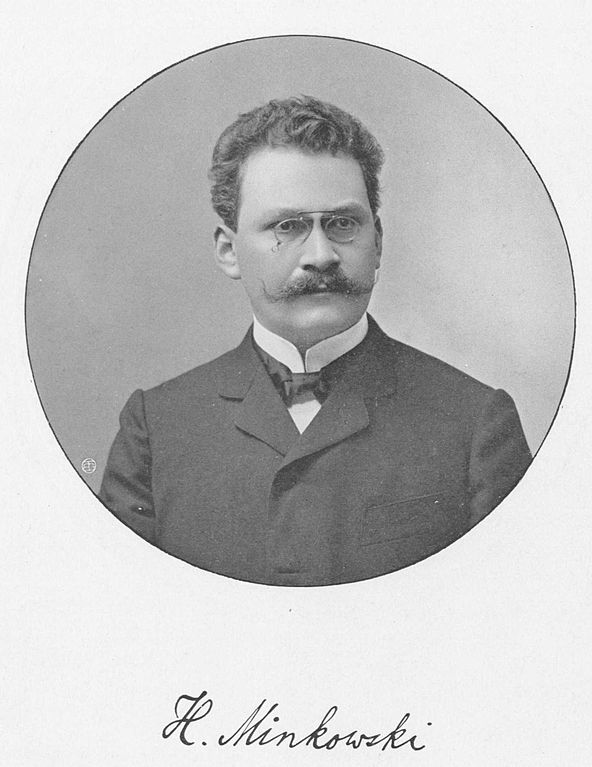 On June 22, 1864, German mathematician Hermann Minkowski was born. Minkowski developed the geometry of numbers and used geometrical methods to solve problems in number theory, mathematical physics, and the theory of relativity. But he is perhaps best known for his work in relativity, in which he showed in 1907 that his former student Albert Einstein’s special theory of relativity can be understood geometrically as a theory of four-dimensional space–time, since known as the “Minkowski spacetime“.[7]

“The views of space and time which I wish to lay before you have sprung from the soil of experimental physics, and therein lies their strength. They are radical. Henceforth, space by itself, and time by itself, are doomed to fade away into mere shadows, and only a kind of union of the two will preserve an independent reality.”
– Hermann Minkowski, Address to the 80th Assembly of German Natural Scientists and Physicians, (Sep 21, 1908)

Hermann Minkowski was born in Russia, but his family returned to Germany and settled in Königsberg when he was about eight years old. It became clear quite early, that he had great talents in mathematics. Minkowski started reading the works of Dedekind, Dirichlet, and Gauss during his school years in Königsberg and enrolled at the University of Königsberg in 1880. Minkowski received his doctorate in 1885 from Königsberg for a thesis titled “Untersuchungen über quadratische Formen, Bestimmung der Anzahl verschiedener Formen, welche ein gegebenes Genus enthält” (studies of square forms, determination of the number of different forms that a given genus contains). Minkowski’s interest in quadratic forms evolved early in his university studies. In 1881, Paris’ Academy of Sciences announced that the Grand Prix for mathematical science to be awarded in 1883 would be for a solution to the problem of the number of representations of an integer as the sum of five squares. Already in 1847, Eisenstein had given a formula for the number of such representations, but without a proof of the result. At the age of 18, Minkowski reconstructed Eisenstein’s theory of quadratic forms and produced a beautiful solution to the Grand Prix problem. Henry John Stephen Smith had previously worked on the problem and also submitted his solution as well. The prize was then shared between the two mathematicians.

Starting from 1887, Minkowski spent a few years teaching in Bonn and Königsberg before being appointed to the Eidgenössische Polytechnikum Zürich. At Zurich Einstein was a student in several of the courses he gave and the two would later become interested in similar problems in relativity theory.[8] In 1902. Minkowski accepted a chair at the University of Göttingen, which was arranged by David Hilbert.[8] There, Minkowski became interested in mathematical physics gaining enthusiasm from Hilbert and his associates. He participated in a seminar on electron theory in 1905 and he learnt the latest results and theories in electrodynamics.

The Geometry of Numbers

From 1890 he developed his geometry of numbers which he had begun in his prize work and where he pioneered. His major work “Geometrie der Zahlen”Geometry of Numbers above appeared in 1896 and completed in 1910, developing and using methods of the theory of convex bodies and lattices and applying them to number theory. A central role was played by Minkowski ‘s lattice point theorem, with which he proved important theorems of algebraic number theory such as Dirichlet ‘s unit theorem or the finiteness of the class number. In 1907 his second major number theory work Diophantische Approximationen appeared, in which he gave applications of his geometry of numbers

Hermann Minkowski laid the mathematical foundation of the theory of relativity and developed an entirely new view of space and time. He made clear that Lorentz’ and Einstein’s work could be better understood in a non-euclidean space. Minkowski came to realize that space and time, which were previously thought to be independent, are coupled together in a four-dimensional ‘space-time continuum‘. To his major works in the field belong ‘Raum und Zeit’ (Space and Time), published in 1907, as well as ‘Zwei Abhandlungen über die Grundgleichungen der Elektrodynamik‘ (Two papers on the fundamental equations of electrodynamics) published two years later. Minkowski gave a sensational lecture on this in 1908 at the meeting of the Society of German Natural Scientists and Physicians. Einstein, who was initially opposed to Minkowski’s four-dimensional approach, later used his ideas on the space-time continuum in his general theory of relativity.

At the age of 44, Minkowski had an appendicitis. At that time, surgery to cure the disease was not yet common, but even surgery could not save his life. In the last hours he tried to complete numerous manuscripts. Hermann Minkowski died on January 12, 1909 in Göttingen.