You are here: Home › engineering › Enabling Radio Broadcast of Sound – Lee De Forest and the Audion 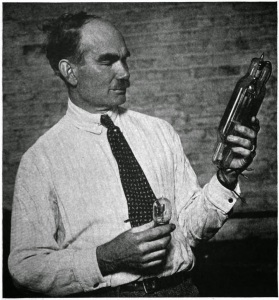 On August 26, 1873, American inventor Lee de Forest was born. He is credited more than 180 patents. In 1906, de Forest invented the Audion, the first triode vacuum tube and the first electrical device which could amplify a weak electrical signal and make it stronger, making radio broadcasting, television, and long-distance telephone service possible, among many other applications.

Lee De Forest was born in Iowa to parish priest Henry Swift De Forest; his mother was Anna Margaret De Forest, née Robbins. His father hoped Lee would one day continue in the priesthood. However, he knew that he wanted to become an inventor at very early age. It is known that he performed many experiments during his childhood and created several electrical and mechanical devices. The young De Forest wrote a letter to his father:

“I intend to be a machinist and inventor, because I have great talents in that direction. In this I think you will agree with me. If this be so, why not allow me to so study as to best prepare myself for that profession? In doing this it would be much better to prepare myself for and take the Sheffield Scientific course“.

From a University Suspension to a Ph.D.

Shortly after, he enrolled at the Sheffield Scientific School at Yale University in Connecticut in 1893. As a curious student, one evening he caused a complete power failure on the school grounds when he wanted to tap into the university’s electrical system. Thereupon he was suspended from school. Some time later he was allowed to finish his studies. He earned part of his school fees with inventions. He earned his Bachelor of science degree in 1896 and his Ph.D. in 1899 with a dissertation on radio waves [1].

De Forest was hired by Western Electric, where he devised dynamos, telephone equipment, and early radio gear. He used the wireless telegraph which had earlier been introduced by Marconi and searched for a better detector or receiver and patented a device he called the ‘responder’. The inventor started his own business in 1902 called ‘De Forest Wireless Telegraph Company’, selling  radio equipment and demonstrating the new technology by broadcasting Morse code signals. However, he resigned as its president four years later. While Lee De Forest worked on the improvement of the wireless telegraph equipment, he modified the vacuum tube invented by John Ambrose Fleming and designed the Audion, and he used it to detect or receive code and voice messages. In the book, ‘Lee de Forest, King of Radio, Television, and Film‘ it was said that

“the patentable differences between this invention and that of Fleming are de Forest’s addition of the second battery between the plate and the earphone, called a ‘B’ battery, and the use of a telephone earphone instead of the galvanometer. These two very significant changes result in the ‘hearing’ of a signal as opposed to Fleming’s ‘seeing’ it using a visual indicator. These differences mean that only the de Forest version will be able to ‘hear’ the audio from the imminent invention of the radiotelephone” [1,2].

With the Audion tube, a gas-filled tube, it was possible to amplify speech during radio reception. De Forest said he didn’t know why it worked. De Forest’s innovation was the insertion of a third electrode, the grid, between the cathode and the anode. The inventor published the first known writings on how music could be send into homes using the wireless telephone, or the radio. He used his audion detector as a radio receiver and his audion amplifier to make small signals louder, and the oscillating audion as a transmitter. In 1907 De Forest went on air for the first time, with a conversation on the women’s rights movement, which he conducted with his mother-in-law Harriot Eaton Stanton Blatch, a well-known suffragette. 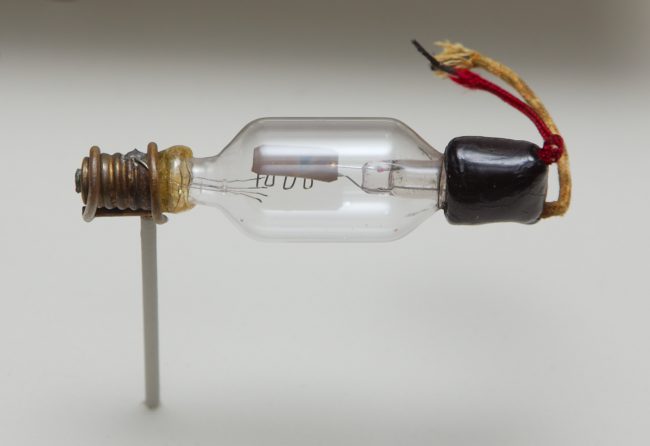 De Forest set up a radio station in the Bronx in 1916, but without any financial success. The same year, De Forest broadcast the first radio commercial (for his own products) from his news station, and he was the first to report on radio about a presidential election. Although he broadcast the first music program (with recordings by Enrico Caruso, 1910) and brought many other events to the radio, he received little support. It is reported that in the early 1920s he stole the idea for the sound film from his classmate Theodore Willard Case in Yale. In 1922 De Forest improved the work of German inventors and developed phonofilm. In phonographic film, the sound was recorded directly onto the film with parallel lines. The sound was converted into electrical pulses by a microphone and then recorded photographically as lines. During playback, these lines were then converted back into sound. The phonofilm system, which recorded sound synchronously with the picture, made it possible to record stage performances, speeches and musical performances. However, when the industry later on adopted the concept of sound on film, a process very similar to De Forest’s was used [3].

In 1931 Lee De Forest sold one of his companies to RCA. In 1934, the Supreme Court ruled in favor of De Forest in the patent dispute with Armstrong. He won the case, but lost his public image. He was not regarded by public opinion as a serious inventor, and as a colleague he was no longer trusted. For his contributions, Lee De Forest was awarded the 1922 Medal of Honor of the Institute of Radio Engineers and the 1946 Edison Medal from the AIEE. In 1959/1960, he received an Academy Award for “his groundbreaking invention that brought sound to moving pictures” [8] and a star on the Hollywood Walk of Fame [9]. During his life time, the inventor filed almost 200 patents, but passed away as a poor man in Hollywood in 1961 1961 and was buried at the San Fernando Mission Cemetery in Los Angeles, California.