You are here: Home › mathematics › Euclid of Alexandria – the Father of Geometry 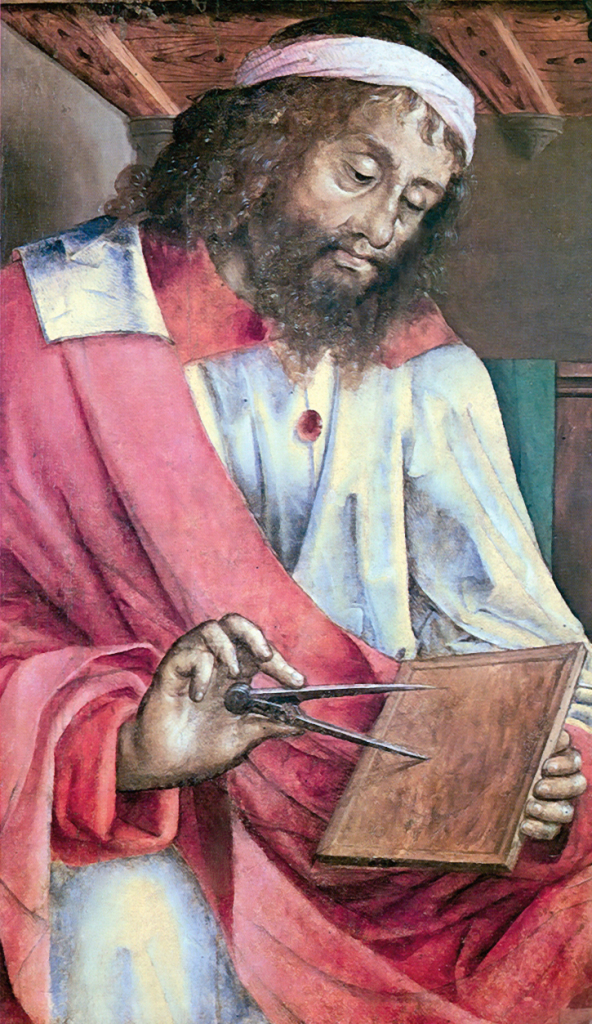 At about 330 BC, Euclid of Alexandria was born, who often is referred to as the Father of Geometry. His Elements is one of the most influential works in the history of mathematics, serving as the main textbook for teaching mathematics (especially geometry) from the time of its publication until the late 19th or early 20th century. In the Elements, Euclid deduced the principles of what is now called Euclidean geometry from a small set of axioms.

How to find a Date?

Very few original references to Euclid survive, so little is known about his life. The date, place and circumstances of both his birth and death are unknown and may only be estimated roughly relative to other figures mentioned alongside him. The few historical references to Euclid were written long after he lived, by Proclus c. 450 AD and Pappus of Alexandria c. 320 AD. Proclus introduces Euclid only briefly in his Commentary on the Elements. According to Proclus, Euclid belonged to Plato‘s “persuasion” and brought together the Elements, drawing on prior work by several pupils of Plato. Proclus believes that Euclid must have lived during the time of Ptolemy I because he was mentioned by Archimedes, who refers to him as the author of the Elements.[4]

There is no Royal Road to Geometry

Proclus later retells a story that, when Ptolemy I asked if there was a shorter path to learning geometry than Euclid’s Elements, Euclid replied “there is no royal road to geometry.” This anecdote is questionable since it is similar to a story told about Menaechmus and Alexander the Great. Arabian authors state that Euclid was the son of Naucrates and that he was born in Tyre. It is believed by historians of mathematics that this is entirely fictitious and was merely invented by the authors.

Because the lack of biographical information is unusual for the period, some researchers have proposed that Euclid was not, in fact, a historical character and that his works were written by a team of mathematicians who took the name Euclid from a historical figure. They think, Euclid might be similar to Bourbaki, the collective pseudonym under which a group of 20th-century mathematicians published with the aim of reformulating mathematics. However, this hypothesis is not well accepted by scholars and there is little evidence in its favor. 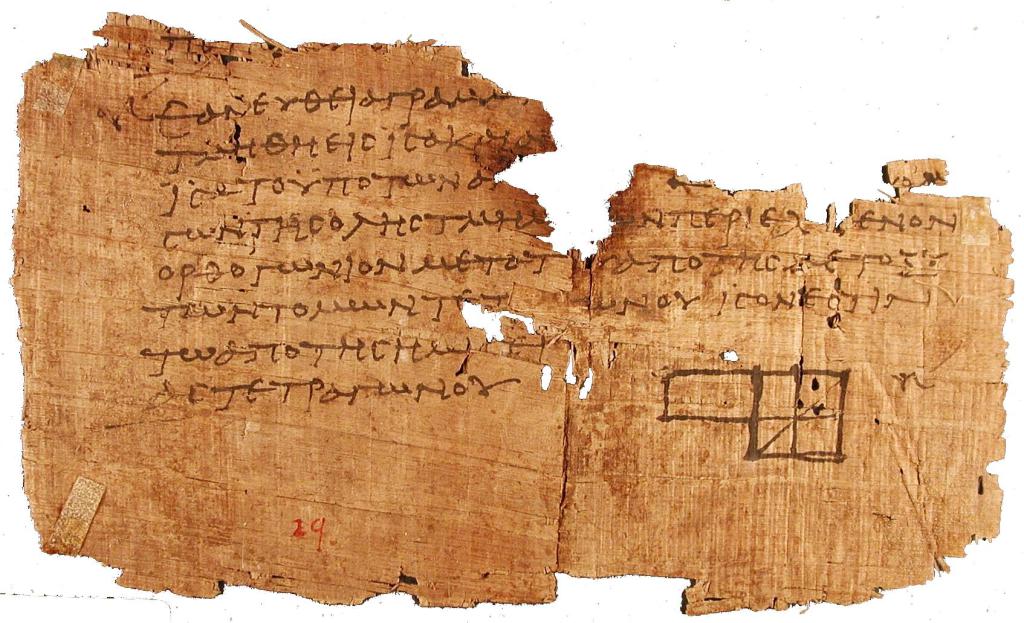 One of the oldest surviving fragments of Euclid’s Elements, found at Oxyrhynchus and dated to circa 100 CE

Euclid‘s most famous work is his treatise on mathematics The Elements. The book was a compilation of knowledge that became the centre of mathematical teaching for 2000 years. Probably no results in The Elements were first proved by Euclid but the organisation of the material and its exposition are certainly due to him.[1] One of Euclid‘s accomplishments was to present the material in a single, logically coherent framework, making it easy to use and easy to reference, including a system of rigorous mathematical proofs that remains the basis of mathematics 23 centuries later. There is no mention of Euclid in the earliest remaining copies of the Elements, and most of the copies say they are “from the edition of Theon” or the “lectures of Theon“. The only reference that historians rely on of Euclid having written the Elements actually was from Proclus, who briefly in his Commentary on the Elements ascribes Euclid as its author.

A Point is that which has no Part

In his Elements, Euclic put the mathematical knowledge of his age on a solid foundation. He began in Book I with 23 definitions, such as “a point is that which has no part” and “a line is a length without breadth”, followed by five unproved assumptions that he called postulates (now known as axioms).[3] Euclid stated that axioms were statements that were just believed to be true, but he realized that by blindly following statements, there would be no point in devising mathematical theories and formulae. He realized that even axioms had to be backed with solid proofs.[2]

The Elements is divided into 13 books. Books one to six deal with plane geometry. In particular books one and two set out basic properties of triangles, parallels, parallelograms, rectangles and squares. Book three studies properties of the circle while book four deals with problems about circles and is thought largely to set out work of the followers of Pythagoras. Book five lays out the work of Eudoxus on proportion applied to commensurable and incommensurable magnitudes. Book six looks at applications of the results of book five to plane geometry.

Although best known for its geometric results, the Elements also includes number theory, which he presented in book seven to nine. It considers the connection between perfect numbers and Mersenne primes (known as the Euclid–Euler theorem), the infinitude of prime numbers, Euclid‘s lemma on factorization (which leads to the fundamental theorem of arithmetic on uniqueness of prime factorizations), and the Euclidean algorithm for finding the greatest common divisor of two numbers. The geometrical system described in the Elements was long known simply as geometry, and was considered to be the only geometry possible. Today, however, that system is often referred to as Euclidean geometry to distinguish it from other so-called non-Euclidean geometries that mathematicians discovered in the 19th century.

Book ten deals with the theory of irrational numbers and is mainly the work of Theaetetus. Books eleven to thirteen deal with three-dimensional geometry, in Greek stereometria. The immense impact of the Elements on Islamic mathematics is visible through the many translations into Arabic from the 9th century forward. Euclid first became known in Europe through Latin translations of these versions. The first extant Latin translation of the Elements was made about 1120 by Adelard of Bath, who obtained a copy of an Arabic version in Spain, where he traveled while disguised as a Muslim student. More than one thousand editions of The Elements have been published since it was first printed in 1482. The impact of this activity on European mathematics cannot be overestimated. The ideas and methods of Johannes Kepler,[5] Pierre de Fermat,[6] René Descartes, [7] and Isaac Newton were deeply rooted in, and inconceivable without, Euclid’s Elements.[1,3]