You are here: Home › mathematics › Every Set can be Well Ordered – Ernst Zermelo 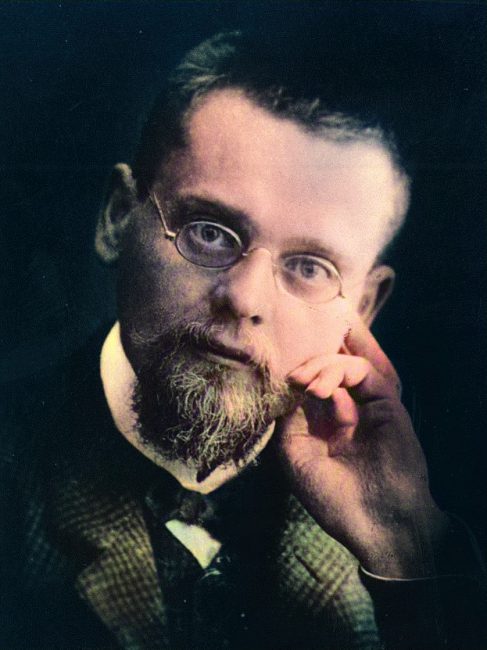 On July 27, 1871, German logician and mathematician Ernst Zermelo was born. Zermelo’s work had major implications for the foundations of mathematics. He is known for his role in developing Zermelo–Fraenkel axiomatic set theory and his proof of the well-ordering theorem.

“…self-evidence … must not be confused with … provability.”
– Ernst Zermelo

The Son of a Grammar School Professor

Zermelo was the son of a grammar school professor and attended the Luisenstädtische Gymnasium in Berlin until he graduated from high school in 1889. He studied mathematics, physics and philosophy at the universities of Berlin, Halle (Saale) and Freiburg and received his doctorate in 1894 from the University of Berlin under Hermann Amandus Schwarz with honours and examinations of the calculus of variations(Untersuchungen zur Variationsrechnung), in which he extended Weierstrass‘ theory.[1] He studied in Berlin under Max Planck, whose assistant he was.[2] In 1896 and 1897 he was involved in a debate with Ludwig Boltzmann, as he saw a contradiction between Poincaré’s theorem and the second law of thermodynamics, which Boltzmann believed to have been derived from mechanics.[3]

In 1897 Zermelo went to Göttingen, then the world centre of mathematics, where he submitted his habilitation on a hydrodynamic topic (Vortices on the Spherical Surface). In 1900, in the Paris conference of the International Congress of Mathematicians, David Hilbert challenged the mathematical community with his famous Hilbert’s problems, a list of 23 unsolved fundamental questions which mathematicians should attack during the coming century.[4] The first of these, a problem of set theory, was the continuum hypothesis introduced by Georg Cantor in 1878, and in the course of its statement Hilbert mentioned also the need to prove the well-ordering theorem. The well-ordering theorem states that every set can be well-ordered. A set X is well-ordered by a strict total order if every non-empty subset of X has a least element under the ordering. This is also known as Zermelo’s theorem and is equivalent to the axiom of choice.

In 1904, he formulated the axiom of choice, thus proving the principle of well ordering that any quantity can be well ordered.  The axiom of choice means that a selection function exists for each set of non-empty sets, i.e. a function that assigns an element to each of these non-empty sets and thus “selects” it. For finite sets this can also be concluded without this axiom, therefore the selection axiom is only interesting for infinite sets. This attracted so much attention that he was appointed professor in Göttingen in 1905. His proof, however, also produced fierce criticism, so that he gave a new proof in 1908. Subsequently, he founded axiomatic set theory with the axioms of Zermelo set theory 1907/08, the basis for Zermelo-Fraenkel set theory, which is now established as the standard approach. Zermelo set theory is the first published axiomatic set theory. To give set theory a solid formal basis, Bertrand Russell published his type theory in 1903,[5] which was difficult to access due to its syntactically complicated form. Zermelo therefore chose the more elegant way of the axiomatic structure of set theory. Its seven set axioms, which mainly secure the existence of sets, proved to be viable and allow the complete derivation of Cantor’s set theory in the extended form of Zermelo-Fraenkel set theory. Zermelo still formulated his axioms verbally; today, on the other hand, they are usually specified in predicate logical form.

In 1910 Zermelo was awarded the chair of mathematics at the University of Zurich. In 1913 he proved that finite games such as chess (there are certain abort conditions so that no game can last indefinitely) have a unique solution. This means that either white has a winning strategy, as in a chess composition (or chess problem), or black has one, or each of the two players can force at least one draw. This result was one of the first in mathematical game theory. In 1916 he was awarded the Ackermann-Teubner Memorial Prize.

Due to some health problems he gave up his professorship in Zurich in 1916 and took up residence in the Black Forest. He worked from 1926 with an honorary professorship at the Albert-Ludwigs-University in Freiburg im Breisgau, but had to give up this work again in 1935, because he refused to start the lectures with Hitler salute, which was denounced by colleagues (Gustav Doetsch and his assistant Eugen Schlotter). After the Second World War he resumed his position as honorary professor, but due to his health he was unable to give any more lectures.

Zermelo was known to be sharp-tongued. Wolfgang Pauli told the following anecdote about Ernst Zermelo: In a lecture on logic in Göttingen, Zermelo presented the following paradox: There would be two classes of mathematicians in Göttingen. The first class includes those who would do what Felix Klein wanted but did not like. Those who did what they liked belonged to the second class, but Felix Klein did not like that.[6] What class is Felix Klein in? When the students remained dumb (Felix Klein held an outstanding position in mathematics in Göttingen and elsewhere in Germany and was also the supervisor of Zermelo, who taught as a private lecturer in Göttingen), he thought the answer was terribly simple: Felix Klein was not a mathematician at all (in fact Klein was known in his later career for dealing a lot with physical applications, and he was accused of inadequate mathematical rigour, especially by the Berlin mathematics school from which Zermelo came). To the anecdote it can be added that Zermelo independently discovered Russell’s antinomy before the publication of Bertrand Russell (1903) and used it in lectures.