You are here: Home › physics › Ernest Walton and the Particle Accelerator 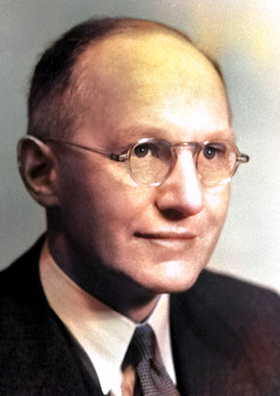 On October 6, 1903, Irish physicist and Nobel laureate Ernest Walton was born. Walton received the Nobel Prize in Physics for his work together with John Cockcroft with “atom-smashing” experiments done at Cambridge University in the early 1930s, and so became the first person in history to artificially split the atom.

“A linear accelerator has the advantage that no magnet is required and that its cost should not rise much more steeply than with the energy of the particles required.”
-Ernest Walton

Ernest Thomas Sinton Walton was born in Abbeyside, Dungarvan, County Waterford, UK, to a Methodist minister father, Rev John Walton and Anna Sinton. He attended day schools in counties Down and Tyrone, and at Wesley College Dublin before becoming a boarder at Methodist College Belfast. In 1922 Walton won scholarships to Trinity College, Dublin for the study of mathematics and science. He was awarded bachelor’s and master’s degrees from Trinity in 1926 and 1927, respectively.

Following graduation he was awarded a Research Fellowship from the Royal Commission for the Exhibition of 1851 and was accepted as a research student at Trinity College, Cambridge, under the supervision of Sir Ernest Rutherford,[5] Director of Cambridge University’s Cavendish Laboratory. At the time there were four Nobel Prize laureates on the staff at the Cavendish lab and a further five were to emerge. Already in 1928 Walton attempted two methods of high-energy particle acceleration. Both failed, mainly because the available power sources could not generate the necessary energies, but his methods were later developed and used in the betatron and the linear accelerator.[3] Walton was awarded his PhD in 1931 and remained at Cambridge as a researcher until 1934.

During the early 1930s Walton and John Cockcroft collaborated to build an apparatus that split the nuclei of lithium atoms by bombarding them with a stream of protons accelerated inside a high-voltage tube (700 kilovolts). In difference to Walton, John Cockcroft was a theoretician. Together they were a perfect team. Cockcroft proved it could be done, and Walton then went and did it.[4] The splitting of the lithium nuclei produced helium nuclei. This was experimental verification of theories about atomic structure that had been proposed earlier by Ernest Rutherford, George Gamow,[6] and others. The successful apparatus – a type of particle accelerator now called the Cockcroft-Walton generator – helped to usher in an era of particle-accelerator-based experimental nuclear physics. The original apparatus is on view in the Science Museum in South Kensington in London and there is a replica in the Smithsonian in Washington DC.[2]

It was this research at Cambridge in the early 1930s that won Walton and Cockcroft the Nobel Prize in physics in 1951 for their “work on the transmutation of the atomic nuclei by artificially accelerated atomic particles“. Walton and Cockcroft also received the Hughes Medal of the Royal Society of London in 1938. They had, in fact, achieved what was previously considered to be impossible. Some short time before their success, Albert Einstein had remarked that splitting the atom was indeed an impossible task: “It would be like a blind man trying to shoot ducks, firing into the air in a country where there were very few ducks.”[2,8] The experiment confirmed a number of predictions arising out of the theory of relativity and the new quantum mechanics, including Einstein’s own famous equation, E = mc2, where E denotes energy, m denotes mass and c is the velocity of light.[2] 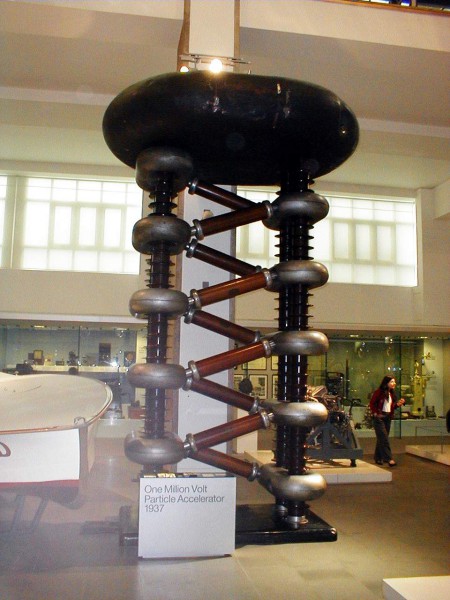 Walton was Clerk Maxwell Scholar from 1932 to 1934 when he returned to Trinity College, Dublin, as Fellow: he was appointed Erasmus Smith’s Professor of Natural and Experimental Philosophy in 1946, and in 1960 he was elected Senior Fellow of Trinity College. Walton’s lecturing was considered outstanding as he had the ability to present complicated matters in simple and easy-to-understand terms. His research interests were pursued with very limited resources, yet he was able to study, in the late 1950s, the phosphorescent effect in glasses, secondary-electron emissions from surfaces under positive-ion bombardment, radiocarbon dating and low-level counting, and the deposition of thin films on glass.

At yovisto academic video search, you may enjoy Brian Cox talking about his work on the Large Hadron Collider at CERN.