You are here: Home › psychology › Anna Freud following the Footsteps of her Father 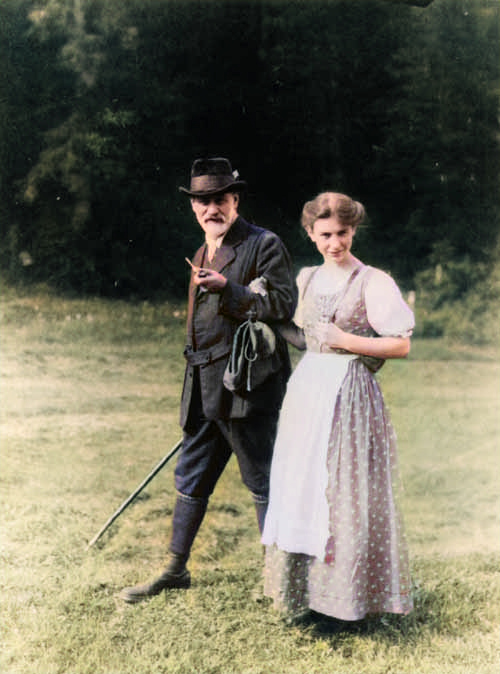 On October 9, 1982, Austrian-British psychoanalyst Anna Freud passed away. The youngest child of Sigmund Freud, Anna Freud followed the path of her father and contributed to the field of psychoanalysis. Alongside Melanie Klein, she may be considered the founder of psychoanalytic child psychology. Compared to her father, her work emphasized the importance of the ego and its ability to be trained socially.

The Daughter of Siegmund Freud

Anna Freud was born on December 3 1895 as the youngest of Martha and Sigmund Freud’s six children.[4,5,6] At the beginning of 1910, Anna’s parents had her school attendance suspended. “She had not only lost weight after an appendectomy, but also seemed a little too unreasonable for the family members in general.” From June 1910 she was treated by Ludwig Jekels, a friend and colleague of her father’s, in his private sanatorium in Bistrai. She finished school at the Cottage Lyceum in Vienna in 1912. After a visit to England, Anna began teaching at her old school. Even though she already read her father’s work during her school years, Anna Freud got involved in psychoanalysis around 1918. Two years later, Anna and her father attended the International Psychoanalytical Congress at The Hague, now sharing the same work field and colleagues. In 1923 she opened her own practice in Berggasse 19 next to her father’s premises. The family got also acquainted to Rainer Maria Rilke, whose work the family admired.

After presenting the paper Beating Fantasies and Daydreams to the Vienna Psychoanalytical Society, Anna Freud was announced a member in 1922. One year later, she opened her own psychoanalytical practice with children and began teaching a seminar at the Vienna Psychoanalytic Training Institute on the technique of child analysis. Her book Introduction to the Technique of Child Analysis, was a series of lectures for teachers and parents. Around 1923, Sigmund Freud began to suffer from cancer, and Anna Freud took care of his nursing and accompanied him to Berlin where he was treated. Next to nursing her father, Anna Freud also served as General Secretary of the International Psychoanalytical Association, continued her practice for child analysis, and held seminars on the matter.

From about 1925 she lived with Dorothy Tiffany Burlingham, a New York million heiress. In 1931 they bought a weekend home in Hochroterd in the southern Vienna Woods. In 1937 they opened the “Jackson Day Nursery” at Rudolfsplatz in the 1st district of Vienna. Anna Freud was announced director of the Vienna Psychoanalytical Training Institute in 1935. In that period, one of her most influential works was published: The Ego and the Mechanisms of Defence. This work became known as one of the founding works of ego psychology. It describes ten defense mechanisms known from psychoanalytic literature: repression, regression, reaction formation, isolation, undoing / denial, projection, introjection, turning against one’s own person, reversal into the opposite, shifting the drive goal (sublimation). After the annexation of Austria by Germany, Anna Freud was interrogated by the Gestapo in Vienna on 22 March 1938. On 4 June 1938 Sigmund Freud, his wife Martha and their children, including Anna, fled to London together with Dorothy and her four children. Anna’s brother Ernst Ludwig Freud had already emigrated there in 1933.

“But even in infantile neurosis, where the defence was carried out out out of real fear [i.e. fear of the outside world], analytical therapy has a very good chance of success. The simplest and most unanalytical is the analyst’s attempt, after reversing the defence process in the child itself, to influence reality, namely the child’s educators, in such a way that there is less real anxiety.”
— Anna Freud, translated from [10]

During the 1930s, when the political situation in Austria got worse and worse, Anna and her friend Dorothy Burlingham began to involve themselves in charitable initiatives. Through their initiatives, they were able to observe infant behaviour and experiment with feeding patterns. By the time of the death of her father in 1939, Anna Freud had already established der practice and lectured child psychology and additionally set up the Hampstead War Nursery, fostering more than 80 children of single-parent families. Along with Dorothy Burlingham, 1945 Anna founded the journal Psychoanalytic Study of the Child together with others.Anna Freud published studies of the children under stress in Young Children in War-Time and Infants without Families.

In 1945 Anna Freud brought a small group of children from concentration camp Theresienstadt to London. They were cared for and looked after under her supervision. The memories of some children were published with their permission. Anna Freud herself wrote an article about them, which she published in 1951 in the journal she founded. During 1947, Anna Freud and Kate Friedlaender managed to establish the Hampstead Child Therapy Courses, followed by a children’s clinic, which highly increased Anna Freud’s reputation. She summarized her material in the book Normality and Pathology in Childhood, published in 1965. During the end of her career, Freud regularly traveled to the United States to teach and lecture, for instance at  Yale and Harvard.

After Anna Freud’s death in 1982, her home was transformed into the Freud Museum.

Elizabeth Ann Danto, Anna Freud and ‘The Conscience of Society’, [10]