You are here: Home › history › The Encyclopædia Britannica and the Spirit of Enlightenment 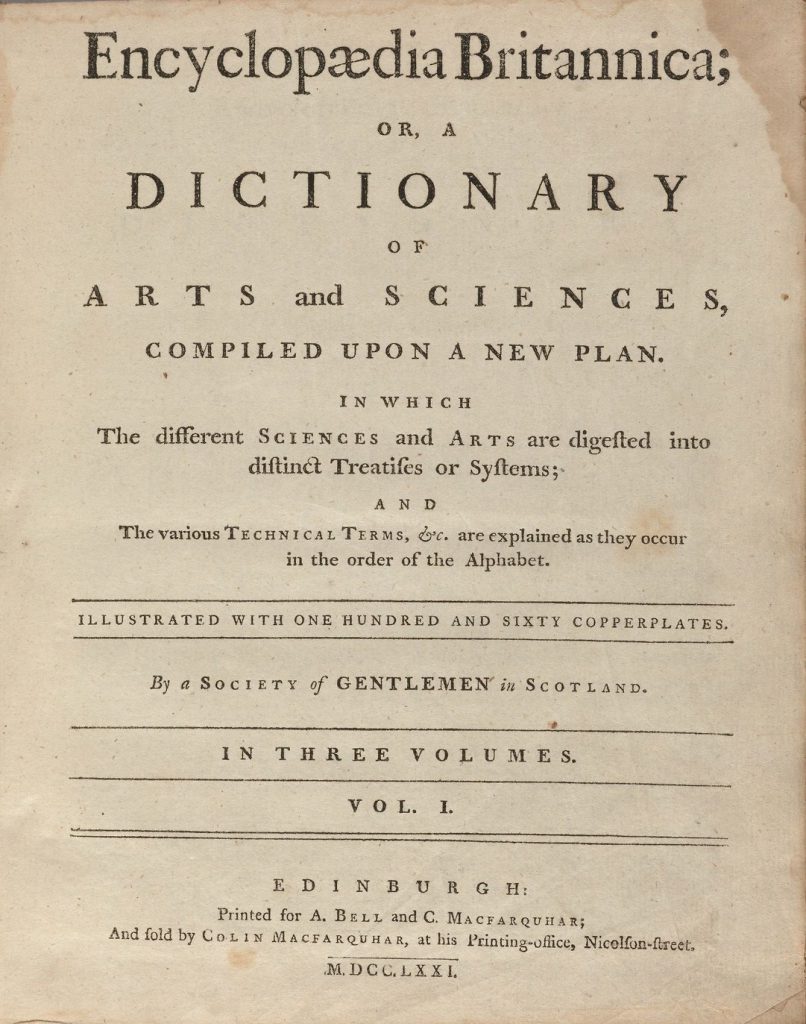 Title page for first edition (1771) of Encyclopaedia Britannica, or, A Dictionary of Arts and Sciences. Typ 705.71.363, Houghton Library, Harvard University

On December 6, 1768, the first volume of the first edition of the Encyclopædia Britannica was published in London as , ‘A Dictionary of Arts and Sciences, compiled upon a New Plan‘. The Britannica is the oldest English-language encyclopaedia still being produced today. The history of its 15 editions alone would be subject of an entire book. But although it might be the most popular encyclopaedia ever printed, it was not the first.

“For perfection seems to be incompatible with the nature of works constructed on such a plan, and embracing such a variety of subjects.”
- George Gleig, in the 3rd edition of the Encyclopædia Britannica

Encyclopedias of various types had been published since antiquity, beginning with the collected works of Aristotle and the famous Natural History of Pliny the Elder.[3] The word encyclopedia comes from the Greek ἐγκύκλιος παιδεία, meaning “general education”. The phrase literally translates as “complete instruction” or “complete knowledge”. However, the two separate words were reduced to a single word due to a scribal error by copyists of a Latin manuscript edition of Quintillian in 1470. The copyists took this phrase to be a single Greek word, enkyklopaedia, with the same meaning, and this spurious Greek word became the New Latin word “encyclopaedia”, which in turn came into English. Because of this compounded word, fifteenth century readers and since have often, and incorrectly, thought that the Roman authors Quintillian and Pliny described an ancient genre.

“The French Encyclopédie had been accused, and justly accused, of having disseminated far and wide the seeds of anarchy and atheism. If the Encyclopædia Britannica shall in any degree counteract the tendency of that pestiferous work, even these two volumes will not be wholly unworthy of your Majesty’s attention.”
- George Gleig, in the Dedication of the Supplement to the 3rd edition of the Encyclopædia Britannica

Isidore of Seville, one of the greatest scholars of the early Middle Ages, is widely recognized for writing the first encyclopedia of the Middle Ages, the Etymologiae (The Etymologies) or Origines (around 630), in which he compiled a sizable portion of the learning available at his time, both ancient and contemporary. The most popular encyclopedia of the Carolingian Age was the De universo or De rerum naturis by Rabanus Maurus, written about 830; it was based on Etymologiae. The encyclopedia of Suda, a massive 10th-century Byzantine encyclopedia, had 30 000 entries, many drawing from ancient sources that have since been lost, and often derived from medieval Christian compilers. The text was arranged alphabetically with some slight deviations from common vowel order and place in the Greek alphabet. Encyclopedias were published in Europe and China throughout the Middle Ages, such as the delightful Satyricon of Martianus Minneus Felix Capella (early 5th century), the Speculum majus (The Great Mirror) of Vincent of Beauvais (1250), and Encyclopedia septem tomis distincta (A Seven-Part Encyclopedia) by Johann Heinrich Alsted (1630). Most early encyclopedias did not include biographies of living people and were written in Latin, although some encyclopedias were translated into English. However, English-composed encyclopedias appeared in the 18th century, beginning with Lexicon technicum, or A Universal English Dictionary of Arts and Sciences by John Harris (two volumes, published 1704 and 1710, respectively), which contained articles by such contributors as Isaac Newton. The first encyclopedia to include biographies of living people was the 64-volume Grosses Universal-Lexicon (published 1732–1759) of Johann Heinrich Zedler, who argued that death alone should not render people notable. Ephraim Chambers’ Cyclopaedia, or Universal Dictionary of Arts and Sciences (1728), and the Encyclopédie of Denis Diderot [5] and Jean le Rond d’Alembert [6] (1751 onwards), as well as Encyclopædia Britannica were the first to realize the form of encyclopaedia we would recognize today, with a comprehensive scope of topics, discussed in depth and organized in an accessible, systematic method.

The Britannica was the idea of Colin Macfarquhar, a bookseller and printer, and Andrew Bell, an engraver, both of Edinburgh. They conceived of the Britannica as a conservative reaction to the French Encyclopédie of Denis Diderot, which was widely viewed as heretical. Ironically, the Encyclopédie had begun as a French translation of the popular English Cyclopaedia by Chambers in 1728. Macfarquhar and Bell were inspired by the intellectual ferment of the Scottish Enlightenment and thought the time ripe for a new encyclopedia “compiled upon a new plan“. They chose a 28-year-old scholar named William Smellie as editor, who was offered 200 pounds sterling to produce the encyclopedia in 100 parts, which were later bound into three volumes. The first number appeared on December 6, 1768 in Edinburgh. The Britannica was published under the pseudonym “A Society of Gentlemen in Scotland“. Releasing the numbers in weekly instalments, the Britannica was completed in 1771, having 2,391 pages. The 1st edition also featured 160 copperplate illustrations engraved by Bell. The key idea that set the Britannica apart was to group related topics together into longer essays, that were then organized alphabetically. Previous English encyclopedias had generally listed related terms separately in their alphabetical order, rather like a modern technical dictionary, an approach that the Britannica’s‘ management derided as “dismembering the sciences“. The vivid prose and easy navigation of the first edition led to strong demand for a second. 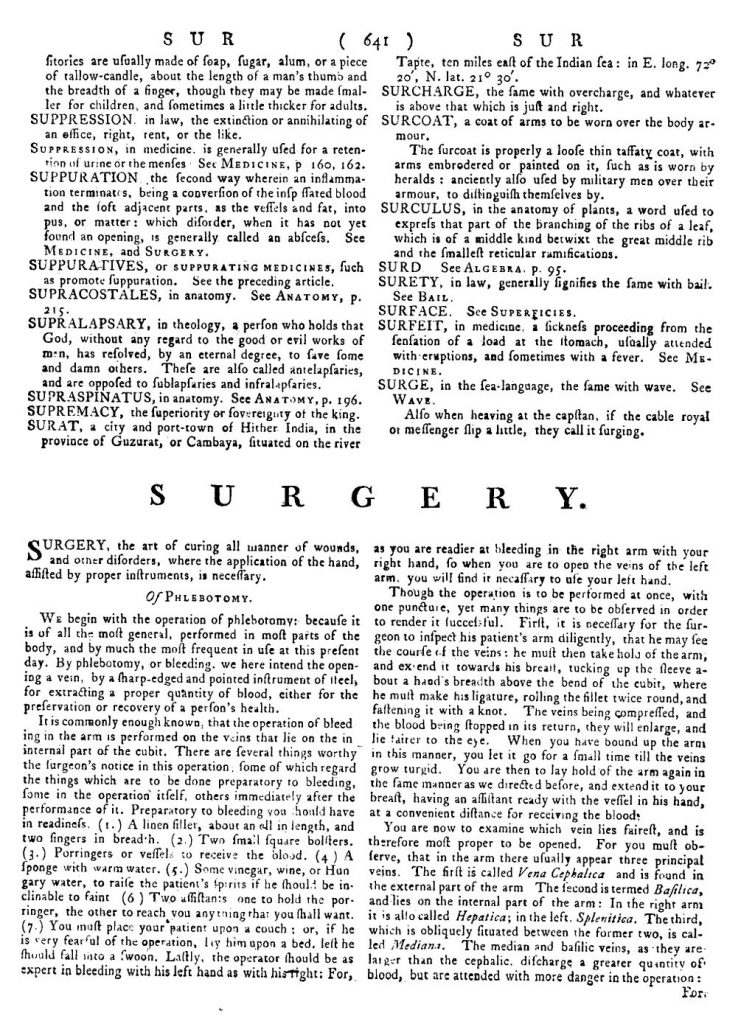 A page from the first edition. The flow of short entries is interrupted here by one of the major treatises.

After the success of the first edition, a more ambitious second edition was begun in 1776, with the addition of history and biography articles. The Britannica has been issued in 15 editions, with multi-volume supplements. Around 1870 the publishing house moved from Scotland to London for the 9th and 10th editions and was associated with the newspaper The Times. For the eleventh edition, the publisher worked with the University of Cambridge. After that, they had to move again, as the trademark and publication rights had been sold to Sears Roebuck. Chicago became the new headquarters. The current publisher, which also acquired the trademark rights for the term “Britannica”, is Encyclopædia Britannica, Inc. The 15th underwent massive re-organisation in 1985, but the updated, current version is still known as the 15th. In 2004, the Britannica contained 75,000 articles with 44 million words. The current version of Britannica was created with the participation of over 4,000 professionals, including well-known scholars such as Milton Friedman, Carl Sagan and Michael E. DeBakey and 100 full-time editors. On March 14, 2012, Britannica announced it would not be printing any more sets of its paper version, which accounted for less than 1 percent of its sales, and would instead focus on its DVD and on-line versions. It had not printed any new sets since 2010. Sales of both of these were disappointing — inability to compete with Wikipedia is mentioned. Sales of the CD ended with the 2012 “Ultimate Edition”.

Throughout history, the Britannica has had two aims: to be an excellent reference book and to provide educational material. In 1974, the 15th edition adopted a third goal: to systematise all human knowledge. Since 1994, there are also digital editions of the Britannica available and the website Britannica Online complements Britannica’s digital resources with more than 120,000 regularly updated articles. In December 2005, the journal Nature published an article comparing the quality of the online edition of Britannica with that of Wikipedia.[6,8] The author concluded that there were few differences in the sample as to the accuracy and completeness of the science articles. The editors of Britannica sharply criticised this article,[7] but Nature maintained it even after Britannica advertised the dispute.

At yovisto academic video search you can learn more about today’s most important online encyclopedia, the self-organizing, self-correcting, never-finished online encyclopedia Wikipedia in a talk by one of its founders Jimmy Wales.