You are here: Home › philosophy › Denis Diderot’s Encyclopedia, or a Systematic Dictionary of the Sciences, Arts, and Crafts 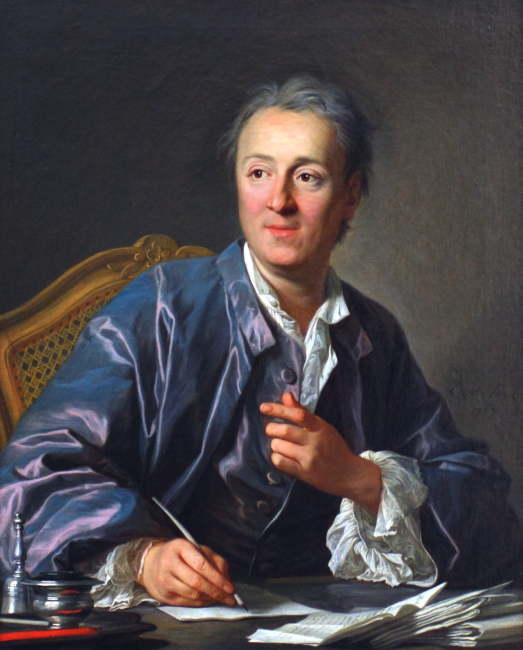 On July 31, 1784, French philosopher, art critic, and writer Denis Diderot passed away. Diderot is best known for serving as co-founder, chief editor, and contributor to the Encyclopédie along with Jean le Rond d’Alembert.[1] He was a prominent figure during the Enlightenment.

The Oldest Child of a Jansenist Master Cutler

Denis Diderot was born on October 5, 1713, the second oldest child of the wealthy Jansenist master cutler Didier Diderot from Langres (Haut-Marne) and his wife Angélique Vigneron. From the age of 12, his parents prepared him for the priesthood. On 22 August 1726 he received the tonsure from the Bishop of Langres and thus the lower ordinations. He now had the right to call himself an Abbé and to wear spiritual clothing. Diderot was first admitted to the Lycée Louis-le-Grand in Paris, then moved to the Jansenist Collège d’Harcourt, graduating in 1732 as magister artium. He failed to join the planned theological studies, but completed his studies at the Sorbonne on 6 August 1735 as bachelor.

From 1736 Diderot worked as a paralegal. When he gave up this post in 1737, his father stopped making regular financial contributions. Diderot now lived four years on writing commissions, so he wrote sermons for clergymen and worked as a tutor for a rich financier, while learning English. The young Diderot led the life of a bohemian. It was a time of chronic shortage of money. Diderot was enthusiastic about the theatre but he was also very interested in mathematics, so he met the mathematician and philosopher Pierre Le Guay de Prémontval and attended his lectures in 1738. Diderot later took on translation activities from English into French and learned English using a Latin-English dictionary. In 1742 he translated the Grecian History of Temple Stanyan.

“No man has received from nature the right to give orders to others. Freedom is a gift from heaven, and every individual of the same species has the right to enjoy it as soon as he is in enjoyment of his reason.”
— L’Encyclopédie (1751-1766), Article on Political Authority, Vol. 1, (1751)

André François Le Breton, a bookseller and printer, had originally thought of a pure translation of the British Cyclopaedia, or Universal Dictionary of the Arts and Sciences, published in 1728 and edited by Ephraim Chambers. In April 1745 Le Breton applied for a royal printing privilege for a multi-volume work translated into French, the Encyclopédie, which was granted on 21 January 1746 and Denis Diderot was to become her translator. Jean-Paul de Gua de Malves was initially entrusted with the organizational management. In 1747, however, he gave up his participation in this project and Diderot took over his function. In 1747 Diderot took over as editor of the Encyclopédie, initially together with d’Alembert, and from 1760 with Louis de Jaucourt. Designing the overall plan, winning authors and organizing their collaboration to fight printing privilege and censorship, and also writing more than 3,000 articles yourself, has been work for years. Where necessary, Diderot expanded its field of knowledge. From 1754 to 1757 he regularly attended the chemistry lectures of Guillaume-François Rouelles.

“There are three principal means of acquiring knowledge available to us: observation of nature, reflection, and experimentation. Observation collects facts; reflection combines them; experimentation verifies the result of that combination. Our observation of nature must be diligent, our reflection profound, and our experiments exact. We rarely see these three means combined; and for this reason, creative geniuses are not common.”
— Denis Diderot, On the Interpretation of Nature (1753)

This work was unorthodox and advanced for the time. Diderot stated that “An encyclopedia ought to make good the failure to execute such a project hitherto, and should encompass not only the fields already covered by the academies, but each and every branch of human knowledge.” Comprehensive knowledge will give “the power to change men’s common way of thinking.”

Title page of the Encyclopédie

Egon Friedel is characterizing Diderot in his “Cultural History of the Modern Era” (Kulturgeschichte der Neuzeit) in the following way: “The soul of the whole company was Denis Diderot, who as a scholar knew how to combine solidity with elegance and as a writer developed a stupendous versatility sparking with colour. He was an unsurpassable master of philosophical dialogue, as well as a playwright, narrator, art critic, mathematician, economist, technologist, and above all a noble and self-sacrificing character enthusiastically devoted to his mission. His world view, which underwent considerable fluctuations in development, was essentially a kind of “monism”, composed of matter, but inspired by it: “la pierre sent”. [7]

During this time Diderot also wrote novels and stories, plays for the theatre, worked on a theater theory and epistemology. Much of this was initially not published, but some of it has already been made public by transcription. Despite all this work, Diderot participated in the lively social life of philosophers – the critical Parisian intellectuals such as Condillac, Turgot, Helvétius and d’Holbach – as well as visiting noble salons. Since the winter of 1752/53 he also had contact by letter to Madame de Pompadour, who according to Marc-Pierre d’Argenson’s journal had made contact with the encyclopedists in 1752. Later she received some of them, including Diderot, for informal dinners and discussions.

“We swallow greedily any lie that flatters us, but we sip only little by little at a truth we find bitter.”
— Denis Diderot, Rameau’s Nephew, 1762

In July 1765, Diderot completed work on the Encyclopédie. He and his family had lived on payments from publishers and booksellers for almost 20 years, and he had no rights to royalties. Only income from his father’s inheritance came from Langres. Dmitri Alexeyevich Golitsyn and Grimm saved the situation. They arranged the sale of Diderot’s library to Catherine II of Russia – it was transported to St. Petersburg after his death – for 16,000 livre. In addition, Catherine II paid him 1000 livre per year throughout his life as librarian of his own library and provided him with money for new acquisitions. Between October 1773 and March 1774, the sick Diderot spent a few months at the empress’s court in Saint Petersburg. Diderot’s library entered (like the Voltaires) the Russian National Library, founded in 1795.

At the centre of Diderotian thought was the field of tension – and this may also apply to other thinkers of the 18th century – between reason and sensitivity, sens et sensibilité. For Diderot, reason was characterised by the search for scientifically founded findings and the verifiability of empirically observed and proven facts, without remaining stuck in the purely quantitative recording of reality, in mathematical statements. In the years 1754 to 1765 he developed the doctrine of universal sensitivity, sensibilité universal.

“All abstract sciences are nothing but the study of relations between signs.”
— Denis Diderot, D’Alembert’s Dream, 1769

For Diderot, science was characterized by the fact that it should not ask for a why, but for the question of how to find an answer. He worked in many fields of knowledge, including chemistry, physics, mathematics, but above all natural history, anatomy and medicine.

In July 1784, upon hearing that Diderot was in poor health, Catherine the Great arranged for him to move into a luxurious suite in the Rue de Richelieu. Diderot died two weeks later of pulmonary thrombosis in Paris on 31 July 1784, and was buried in the city’s Église Saint-Roch.

Into the Vault: the Encyclopédie, [8]