You are here: Home › engineering › John Boyd Dunlop and the Inflatable Tire 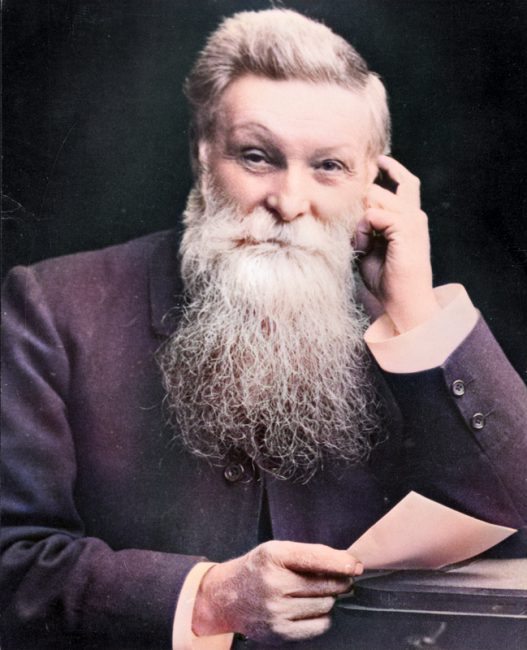 On December 7, 1888, Scottish inventor John Boyd Dunlop patented the pneumatic or inflatable tire. His invention is considered one of the basic building blocks of the automobile manufacturing industry. Today, over 1 billion tires are produced annually in over 400 tire factories.

John Boyd Dunlop was born in 1840 on a farm in Dreghorn, North Ayrshire, Scotland, what is now the eastern outskirts of the town of Irvine. Already as a young man he noticed that it was easier to work the fields with a large roller than with a smaller one, since the larger one could be pulled better over the uneven ground. Since he had health problems as a child, his parents decided to let him study. Dunlop studied to be a veterinary surgeon at Royal School of Veterinary Studies in Edinburgh, or the “Dick Vet” after its founder, William Dick. Dunlop was known as a hard worker. Even at the age of 19 years he has worked to help the economy of his parents who are farmers. After graduation he pursued this profession for nearly ten years at home, before moving to Downpatrick, Ireland, in 1867. Together with his brother James, he established Downe Veterinary Clinic in Downpatrick and moved on to a practice in Belfast.

The Invention of the Inflatable Tire

At work in his practice, Dunlop had to deal more frequently with rubber objects and deal with matter, so he constructed some apparatuses for which he used rubber. His records show that for over 20 years he thought about the practical use of rubber. John Boyd Dunlop’s veterinary work involved a considerable amount of traveling over roads that were often very rough. Even more uncomfortable were the travels those days by the fact that wheels on carriages had rims of iron or wood.

But it was the cobbled streets of Belfast, and his son’s difficulty learning to ride a tricycle with solid rubber tires, that caused Dunlop’s inspiration to strike in 1887. His son was prescribed cycling as cure for a heavy cold. Struck by the idea of making the boy’s tricycle more comfortable, Dunlop developed the inflatable tire for his son’s tricycle, fitting it to a wooden disc 96 cm across in the yard of his home in Belfast. The tire was an inflated tube made of canvas and bonded together with liquid rubber. He then took his wheel and a metal wheel from his son’s tricycle and rolled both across the yard together. The metal wheel stopped rolling but the pneumatic continued until it hit a gatepost and rebounded. Dunlop then put pneumatics on both rear wheels of the tricycle. That too rolled better and Dunlop junior completed its first successful test drive on 28 January 1888. Next, Dunlop moved on to larger tires for a bicycle. He tested that in Cherryvale sports ground, South Belfast, and patented it on 7 December 1888.

He had the local bicycle manufacturer W. Edlin & Co make 50 bicycles equipped with these tyres. When, in 1889, a well-known local cyclist, Willie Hume, won a race at Cherryvale using a bike with Dunlop’s inflatable tires, the novelty started to catch on. The paper manufacturer, Harvey du Cros, who was in the crowd at the time, bought Dunlop’s patents in 1896 for £3000 and some shares in Du Cros’ newly founded company, the Pneumatic Tyre & Booth’s Cycle Agency, for the exploitation of Dunlop’s work.  In Liverpool, it was displayed in the shop window of a bicycle shop, which caused such a crowd that the police were called to clear the sidewalk and road.

Two years after he was granted the patent Dunlop was officially informed that it was invalid as Scottish inventor Robert William Thomson, had already patented the idea in France in 1846 and in the US in 1847. Nevertheless, Dunlop’s development of the pneumatic tire arrived at a crucial time in the development of road transport. Dunlop considered opening a tyre production facility near Coventry, the heart of the English bicycle industry, but was persuaded to locate the jobs in Ireland. Commercial production began in late 1890 in Belfast. In 1895 Dunlop withdrew from the company. It is said that the polite and well-behaved Dunlop could not accept the robust business methods of Du Cros. He put his rather small profit from the tyre business into a Dublin textile factory and continued his veterinary practice without a stir. In the end Dunlop did not make any great fortune by his invention. He died in Dublin in 1921 and today, Dunlop’s image appears on the £10 note, which is in circulation in Northern Ireland.