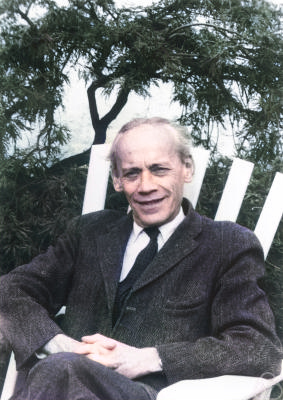 On March 3, 1898, Austrian mathematician Emil Artin was born. Artin was one of the leading mathematicians of the twentieth century. He is best known for his work on algebraic number theory, contributing largely to class field theory and a new construction of L-functions. He also contributed to the pure theories of rings, groups and fields.

Emil Artin was born in Vienna to parents Emma Maria Artin, a soubrette on the operetta stages of Austria and Germany, and Emil Hadochadus Maria Artin, an opera singer and art dealer. He was brought up in the town of Reichenberg in Bohemia which was then part of the Austrian Empire.[1] Artin entered school in September 1904, presumably in Vienna. By then, his father was already suffering symptoms of advanced syphilis and died in 1906, when Artin was eight. In 1907, Artin entered the Volksschule in Strobnitz, a small town in southern Czechoslovakia near the Austrian border, followed by the Realschule in Reichenberg, where he pursued his secondary education until 1916. Rather surprisingly up to sixteen he did not show any particular talent for mathematics.

In October, 1916, Artin matriculated at the University of Vienna, having focused by now on mathematics. After one semester, however, he was drafted into the Austrian army and he served with this army until the end of the War. Then, in 1919, he entered the University of Leipzig where he continued his mathematics studies with Gustav Herglotz. Academic success came quickly and in 1921 he was awarded his doctorate. His thesis concerned applying the methods of the theory of quadratic number fields to quadratic extensions of a field of rational functions of one variable taken over a finite prime field of constants.[1]

The Youngest Professor of Mathematics in Germany

In 1922, Artin went to the University of Hamburg as an assistant for the start of winter semester of session 1922-23. In 1923 he had his Habilitation and accordingly became Privatdozent at Hamburg. At Hamburg Artin lectured on a wide variety of topics including mathematics, mechanics and relativity. He was promoted to extraordinary professor there in 1925, then he became an ordinary professor in the following year being one of the youngest professors of mathematics in Germany at the age of 28.

These were particularly productive years for Artin’s research. He made a major contribution to field theory, the theory of braids and, around 1928, he worked on rings with the minimum condition on right ideals, now called Artinian rings. He had the distinction of solving, in 1927, one of the 23 famous problems posed by Hilbert in 1900 [4], in particular Hilbert’s seventeenth problem, which concerns the expression of positive definite rational functions as sums of quotients of squares.

A General Law of Reciprocity

Also in 1927 he gave a general law of reciprocity which included all previously known laws of reciprocity which had been discovered from the time that Gauss produced his first law.[1,5] Another important piece of work done by Artin during his first period in Hamburg was the theory of braids which he presented in 1925. He again showed his originality by introducing this new area of research which today is being studied by an increasing number of mathematicians working in group theory, semigroup theory, and topology.[1]

In 1929, Artin married one of his students, Natalie Jasny, called Natascha. One of their shared interests was photography, and when Artin bought a Leica A camera for their joint use, Natascha began chronicling the life of the family, as well as the city of Hamburg. For the next decade, she made a series of artful and expressive portraits of Artin that remain by far the best images of him taken at any age. Artin, in turn, took many fine and evocative portraits of Natascha.

Emigration To the U.S.

In Fall 1937 Artin emigrated with his wife and family to the United States of America where he was teaching for a year at Notre Dame University, thereafter from 1938 until 1946 at Indiana University, Bloomington, and finally from 1946 until 1958 at Princeton University. Since Fall 1958, he was teaching again at Hamburg University where his life suddenly came to an end while he was still active.[2]

In 1944 he discovered rings with minimum conditions for right ideals, now known as Artin rings. He presented a new foundation for and extended the arithmetic of semi-simple algebras over the rational number field.[3] During his years in the United States Artin put his energies into teaching and supervising his Ph.D. students who themselves went on to make major contributions. He published relatively few papers, but he wrote a number of extremely important texts which have become classics.[1]

Artin’s books include Geometric Algebra (1957) and, with John T. Tate, Class Field Theory (1961).[3] Artin was one of the leading algebraists of the century, with an influence larger than might be guessed from the one volume of his Collected Papers edited by Serge Lang and John Tate. He worked in algebraic number theory, contributing largely to class field theory and a new construction of L-functions. He also contributed to the pure theories of rings, groups and fields. The influential treatment of abstract algebra by van der Waerden is said to derive in part from Artin’s ideas, as well as those of Emmy Noether.[6] Artin also left two conjectures, both known as Artin’s conjecture. The first concerns Artin L-functions for a linear representation of a Galois group; and the second the frequency with which a given integer a is a primitive root modulo primes p, when a is fixed and p varies. These are unproven; in 1967, Hooley published a conditional proof for the second conjecture, assuming certain cases of the Generalized Riemann hypothesis.