You are here: Home › literature › Nikolai Gogol and Russian Surrealism 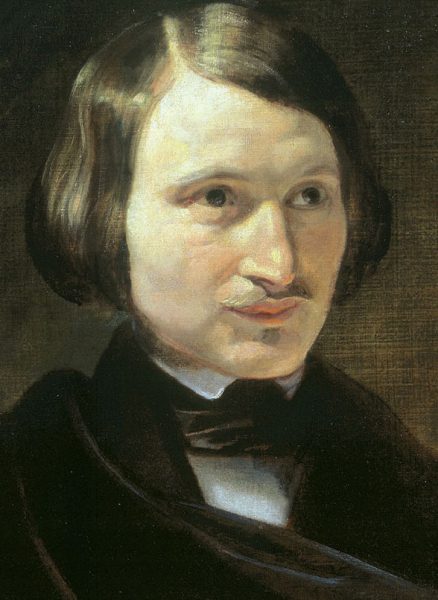 On March 4, 1852, Russian novelist Nikolai Vasilievich Gogol passed away, whose novel Myortvye dushi (Dead Souls) and whose short story “Shinel” (“The Overcoat”) are considered the foundations of the great 19th-century tradition of Russian realism. However, later critics have found in his work a fundamentally romantic sensibility, with strains of surrealism and the grotesque.

“What a dreary world we live in, gentlemen.”
— Nikolai Gogol, How the Two Ivans Quarrelled (1835)

Nikolai Gogol was born in the Ukrainian Cossack village of Sorochyntsi, in Poltava Governorate of the Russian Empire, present-day Ukraine, as the first son to his father Vasily Gogol-Yanovsky, a descendant of Ukrainian Cossacks who died when Gogol was 15 years old, and his mother Leonty Kosyarovsky. His family belonged to the ‘petty gentry’ and the Ukrainian countryside, with its colourful peasantry, its Cossack traditions, and its rich folklore, constituted the background of Gogol’s boyhood.[1] Though his real surname was Ianovskii, his grandfather had claimed his noble Cossack ancestors’ name `Gogol’. In 1820, Gogol went to a school of higher art in Nezhin and remained there until 1828. It was there that he began writing. He was not popular among his schoolmates, who called him their “mysterious dwarf”. Very early he developed a dark and secretive disposition, marked by a painful self-consciousness and boundless ambition.

In 1828, on leaving school, Gogol came to Saint Petersburg, hoping to enter the civil service, but soon discovered that without money and connections he would have to fight hard for a living. He had hoped for literary fame, and brought with him a mediocre sentimental-idyllic poem of German idyllic life – Hans Küchelgarten, he had written in the high school. The magazines he sent it to almost universally derided it. He bought all the copies and destroyed them, swearing never to write poetry again and thought of emigrating to the United States.

Gogol was in touch with the “literary aristocracy”, had a story published in Anton Delvig’s Northern Flowers, and in 1831 was introduced to Pushkin. In the meantime Gogol wrote occasionally for periodicals, finding an escape in childhood memories of the Ukraine. He committed to paper what he remembered of the sunny landscapes, peasants, and boisterous village lads, and he also related tales about devils, witches, and other demonic or fantastic agents that enliven Ukrainian folklore. Romantic stories of the past were thus intermingled with realistic incidents of the present: Evenings on a Farm Near Dikanka (1831-32), Mirgorod (1835), Arabesques (1835).[1]

“In the course of reading he became more and more melancholy and finally became completely gloomy. When the reading was over he uttered in a voice full of sorrow: “Goodness, how sad is our Russia!”
— Nikolai Gogol, On Alexander Pushkin in Four Letters Concerning Dead Souls (1843)

At this time, Gogol developed a passion for Ukrainian history and tried to obtain an appointment to the history department at Kiev University. Despite the support of Pushkin and Sergey Uvarov, the Russian minister of education, his appointment was blocked by a Kyivan bureaucrat on the grounds that Gogol was unqualified. His fictional story Taras Bulba, based on the history of Ukrainian cossacks, was the result of this phase in his interests.

Professor without a Qualification

In 1834 Gogol was appointed assistant professor of medieval history at St. Petersburg University, a job for which he had no qualifications. He turned in a performance ludicrous enough to warrant satiric treatment in one of his own stories. After an introductory lecture made up of brilliant generalizations which the ‘historian’ had prudently prepared and memorized, he gave up all pretense at erudition and teaching, missed two lectures out of three, and when he did appear, muttered unintelligibly through his teeth. At the final examination, he sat in utter silence with a black handkerchief wrapped around his head, simulating a toothache, while another professor interrogated the students. No wonder he already left the position after one year.

The Diary of a Madman

The aggressive realism of a romantic who can neither adapt himself to the world nor escape from it, and is therefore all the more anxious to expose its vulgarity and evil, predominates in Gogol’s Petersburg stories. In “Diary of a Madman”, the hero is an utterly frustrated office drudge who finds compensation in megalomania and ends in a lunatic asylum. In another story, “Nevsky prospekt”, a tragic romantic dreamer is contrasted to an adventurous vulgarian.[1] These stories began to explore the themes of alienation and mental instability, set against the fripperies of fashionable life and the Byzantine inhumanity of the state’s bureaucracy, that he would further develop in his most famous stories, The Nose (1836) and The Overcoat (1842).[2]

“The gentleman lolling back in the chaise was neither dashingly handsome nor yet unbearably ugly, neither too stout nor yet too thin; it could not be claimed he was old but he was no stripling, either. His arrival in the town created no stir and was not marked by anything out of the ordinary.”
— Nikolai Gogol, Dead Souls (1842), Chapter I

Although he had achieved the literary success that he craved, and was equally admired by critics and general readers, Gogol had not found much personal happiness. From 1836 to 1848 Gogol lived abroad, traveling through Germany and Switzerland. Gogol spent the winter of 1836–37 in Paris, among Russian expatriates and Polish exiles, frequently meeting the Polish poets Adam Mickiewicz and Bohdan Zaleski. He eventually settled in Rome. He studied art, read Italian literature and developed a passion for opera. Pushkin’s death in 1837 produced a strong impression on Gogol.

His principal work during years following Pushkin’s death was the satirical epic Dead Souls, seen by many as the first `modern’ Russian novel and a call for reform and freedom for serfs. After the triumph of Dead Souls, Gogol’s contemporaries came to regard him as a great satirist who lampooned the unseemly sides of Imperial Russia. Little did they know that Dead Souls was but the first part of a planned modern-day counterpart to The Divine Comedy of Dante.[4] The first part represented the Inferno; the second part would depict the gradual purification and transformation of the rogue Chichikov under the influence of virtuous publicans and governors – Purgatory.

In April 1848 Gogol returned to Russia from a pilgrimage to Jerusalem and passed his last years in restless movement throughout the country. Dissatisfied with his writings, he fell further under the influence of the spiritual elder Matvey Konstantinovsky, who tried to convince him that writing fiction was a demonic and sinful activity. Gogol became increasingly ascetic, and suffered severe bouts of depression. During one of these on 24 February 1852, he burned most of the manuscripts of the second volume of Dead Souls. In despair at what he had done, believing himself to have been tricked by the Devil himself, Gogol took to his bed and refused all food, and died in agony nine days later at the age of forty-two.[2]

Gogol as an Influencer

Gogol had a gift for caricature and imaginative invention, influencing many other upcoming writers including Dostoevsky,[5] but was often misunderstood. He was a deeply sensitive man, tormented throughout his life with moral and religious issues.[3] Gogol saw the outer world romantically metamorphosed, a singular gift particularly evident from the fantastic spatial transformations in his Gothic stories, “A Terrible Vengeance” and “A Bewitched Place“. His pictures of nature are strange mounds of detail heaped on detail, resulting in an unconnected chaos of things. His people are caricatures, drawn with the method of the caricaturist – which is to exaggerate salient features and to reduce them to geometrical pattern. But these cartoons have a convincingness, a truthfulness, and inevitability – attained as a rule by slight but definitive strokes of unexpected reality – that seems to beggar the visible world itself.