You are here: Home › literature › The World of Dr. Seuss 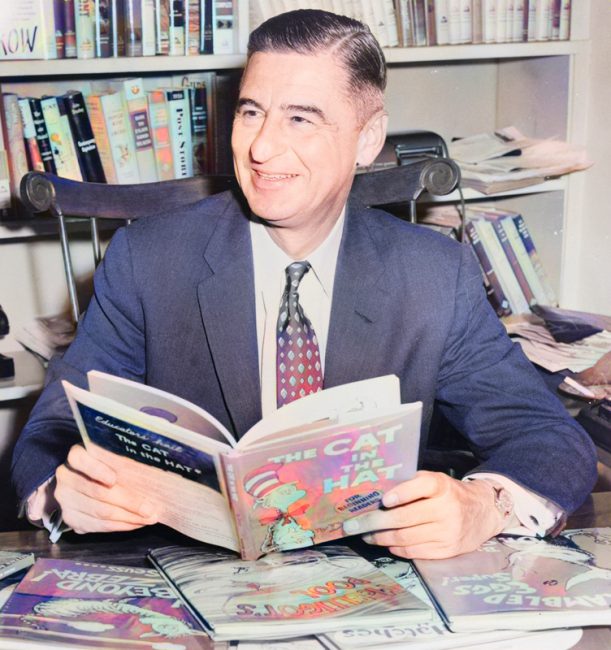 On March 2, 1904, American writer and illustrator Theodor Seuss Geisel was born, better known under his pen name Dr. Seuss. He is best known for authoring popular children’s books, among them several of the most popular children’s books of all time, selling over 600 million copies and being translated into more than 20 languages by the time of his death.

This excerpt from Dr. Seuss’ famous book Yertle the Turtle and Other Stories shows children since 1958 that even the tiniest living being can achieve the biggest things. Dr. Seuss’ works have been read and taught to children all over the world, and many of them carry highly political messages as well.

Theodor Seuss Geisel was born in Springfield, Massachusetts. All of his grandparents were immigrants from Germany and his father managed the family brewery until the beginning of the prohibition. Geisel attended Dartmouth College. There he joined the magazine Dartmouth Jack-O-Lantern and became its editor-in-chief. Unfortunately, Geisel was expelled from the magazine due to illegal alcohol consumption and continued ‘secretly’ working there. He started to sign his work with ‘Seuss‘.

In order to study English literature and earn his PhD, Geisel entered Lincoln College, Oxford. However, he left without a degree and returned to the United States, immediately starting to submit numerous writings as well as drawings to magazines and book publishers. Geisel’s first nationally published cartoon appeared in the July 16, 1927 issue of The Saturday Evening Post. In October 1927, Geisel published his first cartoons for Judge magazine and one month later, he began signing his work with his pen name ‘Dr. Seuss‘.

The 500 Hats of Bartholomew Cubbins

Theodor Geisel and his wife Helen frequently traveled around the world and it is believed that the rhythm of the ship’s engines inspired him to write the poem that became his first book: And to Think That I Saw It on Mulberry Street. It was published by Vanguard Press and he wrote four more books before the United States entered World War II, including The 500 Hats of Bartholomew Cubbins in 1938, The King’s Stilts and The Seven Lady Godivas in 1939. One year later, Geisel published Horton Hatches the Egg.

Geisel devoted much time to political cartoons as the War started. In two years, he drew more than 400 cartoons for the New York City daily newspaper. His work denounced Hitler and Mussolini, further, he criticized non-interventionists who opposed US entry into World War II. Geisel directly supported the US war effort by drawing posters for the Treasury Department and the War Production Board. Later, he joined the Army as a Captain and was commander of the Animation Department of the First Motion Picture Unit of the United States Army Air Forces.

How the Grinch Stole Christmas

How the Grinch Stole Christmas is one of the most popular children’s book by Dr. Seuss. The book, which criticizes the commercialization of Christmas, was published in 1957 by Random House and is one of the 100 most successful children’s books in the USA. It follows the Grinch, a grouchy, solitary creature who attempts to put an end to Christmas by stealing Christmas-themed items from the homes of the nearby town Whoville on Christmas Eve. The Grinch first appeared in a 32-line illustrated poem by Dr. Seuss called “The Hoobub and the Grinch,” which was originally published in the May 1955 edition of Redbook magazine.

The Reason for his Success

The reason for his success was above all his Beginner Books, which manage with less than 250 different words, but arouse the interest of young readers with meaningful and imaginative illustrations and short, clever texts. The first work in this series was The Cat in the Hat in 1957, commissioned by the two publishers Houghton Mifflin and Random House, with the intention of bringing out a book for novice readers that would not understretch their imagination and thus make their entry into the world of reading exciting. Many other novice books such as One Fish Two Fish Red Fish Blue Fish followed. The publicity-shy hostage also made headlines with his very liberal political views and their expression in his artistic work. Other works included Fox in Socks, Oh, the Places You’ll Go and Horton Hatches the Egg.

Dr. Seuss has written more than 40 books and is one of the most widely read children’s authors in the English-speaking world. In 1956, Dartmouth awarded Geisel with an honorary doctorate, finally justifying the “Dr.” in his pen name. Geisel’s wife Helen had a long struggle with illnesses, including cancer and emotional pain over Geisel’s affair with Audrey Stone Dimond. On October 23, 1967, Helen committed suicide; Geisel married Dimond on June 21, 1968. Although he devoted most of his life to writing children’s books, Geisel had no children of his own, saying of children: “You have ’em; I’ll entertain ’em.”

Theodor Seuss Geisel died on September 24, 1991. In his birthplace of Springfield, Massachusetts the Dr. Seuss National Memorial Sculpture Garden opened in 2002. It features sculptures of Geisel and of many of his characters. In 2008, he was introduced to the California Hall of Fame located at The California Museum for History, Women and the Arts. Further, Dr. Seuss was awarded two Academy awards, two Emmy awards, a Peabody award, the Laura Ingalls Wilder Medal, and the Pulitzer Prize.[5]

During his lifetime, Dr. Seuss was determined to encourage creativity and thought. He even invented a new alphabet in On Beyond Zebra! because

“In the places I go there are things that I see
That I never could spell if I stopped with the Z.
I’m telling you this ’cause you’re one of my friends.
My alphabet starts where your alphabet ends!”

as the narrator explains in the story. Dr. Seuss suggests that new discoveries wait where words may find an end and in Oh The Thinks You Can Think, Dr. Seuss further added:

“Think left and think right and think low and think high. Oh, the thinks you can think up if only you try!“