You are here: Home › zoology › Libbie Hyman and her Passion for the Invertebrates 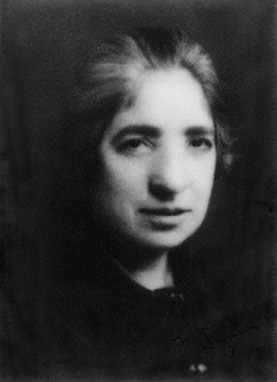 On December 6, 1888, U.S. zoologist Libbie Henrietta Hyman was born. Hyman wrote two laboratory manuals and a comprehensive six-volume reference work, The Invertebrates, (1940-67) covering most phyla of its subject. This work, important for its organization, description and classification of invertebrates, is a reference still used today.

Libbie Hyman was born in Des Moines, Iowa, USA, the third of four children and the only daughter of Joseph Hyman, a Polish/Russian Jew, and Sabina (‘Bena’) Neumann. Libbie’s father successively owned clothing stores in Des Moines, in Sioux Falls, South Dakota, and in Fort Dodge, Iowa, but the family’s resources were limited. Hyman attended public schools in Fort Dodge. At home she was required to do much of the housework. She enjoyed reading, especially books by Charles Dickens in her father’s small den, and she took a strong interest in flowers, which she learned to classify with a copy of Asa Gray‘s Elements of Botany.[6]

Hyman graduated from high school in Fort Dodge in 1905 as the youngest member of her class and the valedictorian. Although she passed the state examination for teaching in the country schools, she was too young to be appointed to a teaching position and returned to high school during 1906 for advanced studies in science and German. When these classes ended, she took a factory job, pasting labels on oatmeal cereal boxes. On her way home from the factory one fall afternoon, she met Mary Crawford, a Radcliffe graduate and high school language teacher who was shocked to learn what she was doing. Crawford arranged for Hyman to attend the University of Chicago with scholarship money that was available to top students.

From Botany via Chemistry to Zoology

She continued at the university with further scholarships and nominal jobs. Turning away from botany because of an unpleasant laboratory assistant, she tried chemistry but did not like its quantitative procedures. She then took zoology and was encouraged in it by Professor Charles Manning Child. After receiving a B.S. in zoology in 1910, she acted on Child’s advice to continue with graduate work at the University of Chicago. Supporting herself as laboratory assistant in various zoology courses, she concluded that a better laboratory text was needed, which in time she was to supply. She received a Ph.D. in zoology in 1915, with a thesis on “An Analysis of the Process of Regeneration in Certain Microdrilous Oligochaetes.” She then accepted an appointment as Child’s research assistant, a position she held until he neared retirement. Her work in Child’s laboratory consisted of conducting physiological experiments on lower invertebrates, including hydras and flatworms.

It was during this time that Hyman realized that many of these common animals were misidentified because they had not been carefully studied taxonomically. She became a taxonomic specialist in these invertebrate groups.[1] At the request of the University of Chicago Press, Hyman wrote A Laboratory Manual for Elementary Zoology (1919), which promptly became widely used, to her astonishment. She followed this, again at the publisher’s request, with A Laboratory Manual for Comparative Vertebrate Anatomy (1922), which also had great success. She was, however, much more interested in invertebrates.

While at the University of Chicago, Hyman also wrote significant taxonomic papers on such invertebrates as the Turbellaria (flatworms) and North American species of the freshwater cnidarian Hydra. She published an enlarged edition of her first laboratory manual in 1929. In 1931, Hyman concluded that she could live on the royalties of her published books, and she also recognized that her mentor Child was about to retire. She therefore resigned her position at Chicago. Hyman toured western Europe for fifteen months and then returned to begin writing a treatise on the invertebrates. Settling in New York City in order to use the library of the American Museum of Natural History, she became, in December 1936, an unpaid research associate of the museum, which provided her with an office for the rest of her life.

There, Libbie Hyman created her six-volume treatise on invertebrates, The Invertebrates, drawing on her familiarity with several European languages and Russian, which she had learned from her father. Without any assistant, she compiled notes from books and scientific papers, including those in the many journals to which she subscribed, organized the notes on cards, and wrote an account of each invertebrate group. Colleagues said that she had a prodigious memory. She took art lessons in order to illustrate her work professionally. She also spent several summers studying specimens and drawing illustrations at Bermuda Biological Laboratory, Marine Biological Laboratory, Mt. Desert Island Biological Laboratory, and Puget Sound Biological Station.

The six volumes of The Invertebrates are not notable only as a compendium. In it she developed her scientific theory that the Phylum Chordata, including all vertebrates, was evolutionarily related to the apparently very different and very much more primitive Echinodermata, such as starfish. This group is now known as the deuterostomes. Her theory was based upon the morphological data of classical embryology, and has since been confirmed by molecular sequence analysis.

In addition to her major project, Libbie Hyman extensively revised A Laboratory Manual for Comparative Vertebrate Anatomy in 1942 into a textbook as well as laboratory manual; she referred to it as her “bread and butter” for its income. Hyman served as editor of the journal Systematic Zoology from 1959 to 1963. In 1960, she was elected a Fellow of the American Academy of Arts and Sciences. She was honored in 1961 with membership in the National Academy of Sciences, from which she had received the Daniel Giraud Elliot Medal in 1951. She also received the gold medal of the Linnean Society of London (1960) and a gold medal from the American Museum of Natural History (1969).

In the last decade of Hyman’s life, her health was poor and her work on invertebrates had become more difficult. In 1967, at the age of seventy-eight and suffering from Parkinson’s disease, she published the sixth volume of her treatise The Invertebrates.[1]