You are here: Home › mathematics › Jordan Carson Mark and the Development of Thermonuclear Weapons

On July 6, 1913, Canadian mathematician Jordan Carson Mark was born. Mark is best known for his work on developing nuclear weapons for the United States at the Los Alamos National Laboratory. He oversaw the development of new weapons, including the hydrogen bomb in the 1950s. On the hydrogen bomb project he was able to bring together experts like Edward Teller, Stanislaw Ulam and Marshall Holloway despite their personal differences.

Jordan Carson Mark was born in Lindsay, Ontario, Canada. He received a Bachelor of Arts degree in mathematics and physics from the University of Western Ontario in 1935, and a Doctor of Philosophy (PhD) in mathematics from the University of Toronto in 1938 with his thesis “On the Modular Representations of the Group GLH(3,P)” under the supervision of Richard Brauer, a leading German American mathematician, who worked mainly in abstract algebra, but made important contributions to number theory.

Mark taught mathematics at the University of Manitoba, from 1938 until World War II, when he joined the Montreal Laboratory of the National Research Council of Canada in 1943. He came to the Los Alamos Laboratory in May 1945 as part of the British Mission to the Manhattan Project, although he remained a Canadian government employee. When World War II ended, Mark remained as part of the permanent staff of Los Alamos, becoming head of its Theoretical Division in 1947, a position previously held by Hans Bethe, which he remained in until he retired in 1973. In this position, Mark oversaw the development of various weapons systems, including thermonuclear bombs.[6]

In 1947 the Los Alamos Laboratory, under the leadership of Norris Bradbury, who had succeeded Robert Oppenheimer, was much smaller than it had been during the war, because most of the wartime staff had returned to their universities and laboratories, but it was still the center of American nuclear weapons development, and the Theoretical Division was for many years the center of the laboratory.[7] The Laboratory made great strides in improving the weapons, making them easier to manufacture, stockpile and handle. The Operation Sandstone tests in 1948 demonstrated that uranium-235 could be used in implosion-type nuclear weapons.

A crash program to develop the hydrogen bomb was approved by President Harry S. Truman in early 1950, after learning that the Soviets had tested a fission bomb, at Edward Teller‘s urging before the laboratory had a workable design. This put the laboratory under great pressure. When Stanislaw Ulam finally came up with a workable design, it was Mark that he approached first. Mark took the Ulam design to Bradbury, and they put the idea to Teller, who then completed and extended the invention. The Teller-Ulam design would become that of all thermonuclear weapons.[3,4] 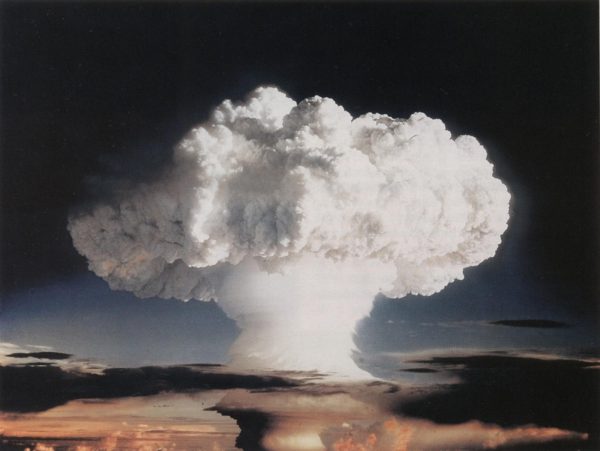 Ivy Mike (yield 10.4 mt) – an atmospheric nuclear test conducted by the U.S. at Enewetak Atoll on 1 November 1952. It was the world’s first successful hydrogen bomb.

When it came to testing the design in the Ivy Mike nuclear test, the test was successful, obliterating an island in Enewetak Atoll in the Pacific on November 1, 1952. As most weapon research in the 1960s no longer involved the Theoretical Division, Mark branched out, sponsoring research into hydrodynamics, neutron physics and transport theory. He also supported Frederick Reines’s research into neutrinos, for which Reines was awarded the Nobel Prize in Physics in 1995.[5]

In 1958, and again the following year, Mark was a scientific adviser to the United States delegation at the Conference of Experts on Detection of Nuclear Explosions in Geneva, where delegates from Western and Eastern bloc countries discussed detection methods in the context of negotiations that eventually led to the Partial Test Ban Treaty, which banned most forms of nuclear testing. He was committed to preventing nuclear weapons proliferation.

Mark was member of the American Mathematical Society and the American Physical Society. After he retired from Los Alamos in 1973 he served on the Nuclear Regulatory Commission’s Advisory Committee on Reactor Safeguards, and was a consultant for the Nuclear Control Institute. Jordan Carson Mark died on March 2, 1997, aged 83.