You are here: Home › chemistry › Friedrich Accum and the Popularization of Chemistry 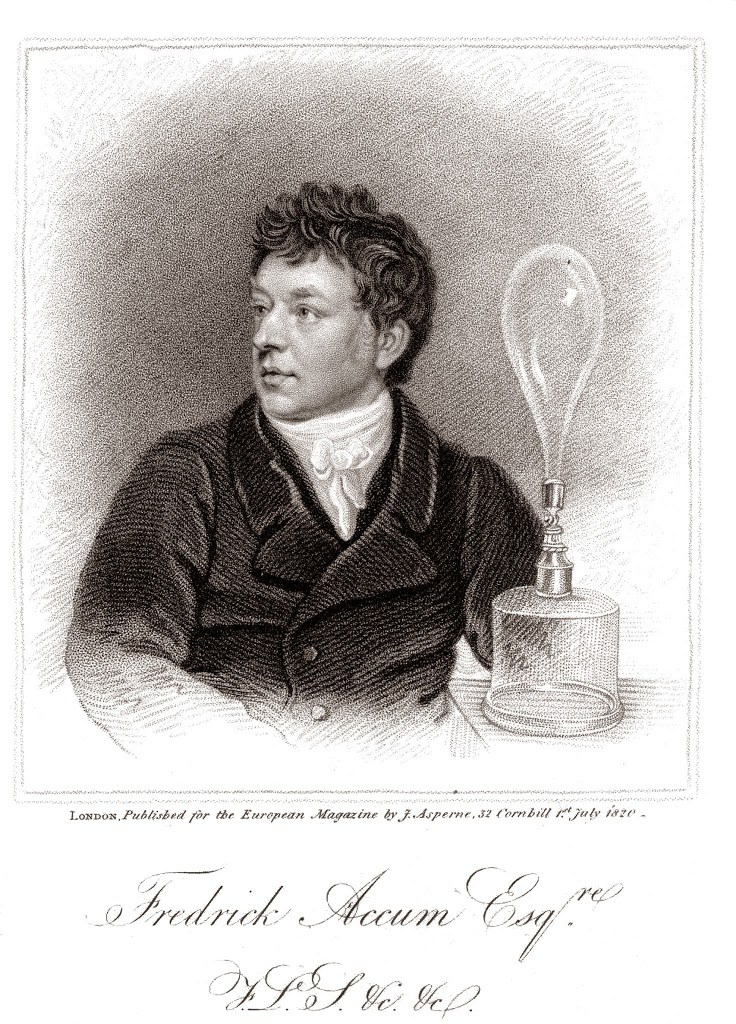 On March 29, 1769, German chemist Friedrich Christian Accum was born. Accum‘s most important achievements included advances in the field of gas lighting, efforts to keep processed foods free from dangerous additives, and the promotion of interest in the science of chemistry to the general populace.

Accum was born in Bückeburg, Schaumburg-Lippe (near Hannover), where his father was in the service of Count Wilhelm von Schaumburg-Lippe. Friedrich’ father died, when the boy was only three years of age. He attended the Bückeburg Gymnasium and received private tutelage in the subjects of French and English. He finished an apprenticeship as an apothecary with the Brande family in Hanover, who were family friends and also conducted business in London. As one of the leading centers for scientific research and industry, London also attracted Friedrich, who relocated there in 1793. After gaining experience as an assistant in the apothecary, Accum pursued Scientific and medical studies at the School of Anatomy in Great Windmill Street in London.

He became acquainted with the London chemist William Nicholson and in Nicholson’s circulating journal, Accum published his first article in 1798. In 1800, Accum and his family changed residence in London and his family home should also served as a school, an experimental laboratory and a mercantile for chemicals and scientific instruments. His business manufactured and sold a variety of chemicals and laboratory equipment. Accum, himself, gave fee based public lectures in practical chemistry and collaborated with research efforts at numerous other institutes of science. 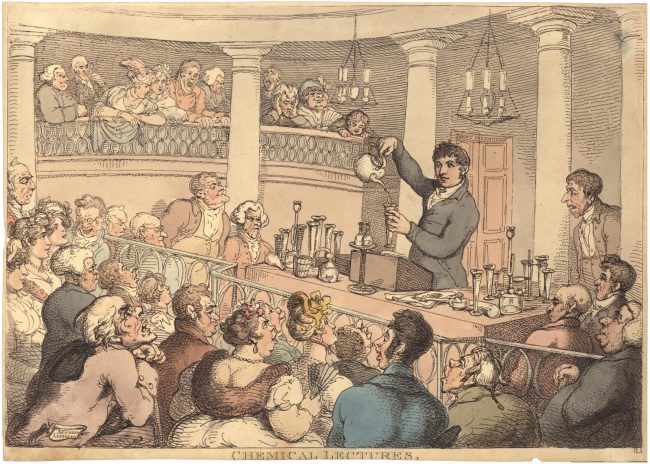 Chemical Lectures, contemporary caricature by Thomas Rowlandson. The inscription Surrey Institution on the door frame and the title Accum’s Lectures on the dust jacket held by the man sitting on the left under the corner both indicate that this image likely depicts Accum

The System of Theoretical and Practical Chemistry

By 1803, Friedrich Accum had published a series of articles in Nicholson’s Journal, which discussed a number of subjects: investigating methods to determine the purity of medicines, determining the existence of benzoic acids in vanilla extract, observing the explosivity of sulphur-phosphorus mixtures. In the same year one of Accum’s most significant publications was completed, the System of Theoretical and Practical Chemistry, which was the first text-book of general chemistry written in the English language to be based on Lavoisier‘s new principles [3,4].

Artificial lighting of any sort was largely absent during the industrial development of the late 18th and early 19th centuries. Using candles or oil lamps to illuminate a textile factory was costly, and economically unsound. With the advent of industrial means of production, not only were new textile halls physically larger, but they also had to be lit more brightly for longer periods of time. Driven by great demand, and made possible through Lavoisier’s theoretical work regarding the role of oxygen in combustion, the end of the 18th century saw a continuous series of improvements in lighting technology.

Intrigued by the work of Frederick Winsor, who had been championing the introduction of gas lighting in London, Accum too, became fascinated by this innovation. At the request of the Gas Light and Coke Company, he carried out many experiments in this novel field of inquiry. After a time of close working association with this company, he became a member of its board of directors in 1812. The company was charged with founding the first gasworks in London to supply gas lighting to both private and public areas. Accum was instrumental in the conception and design of this extremely successful gasworks.

“There is death in the pot”

The majority of Accum’s publications were written in English. They were executed in a style that made them quite accessible to the common man. Many scientific contributions were brought forth through his writings, which were influential in the popularization of chemistry during this era. In 1820, Accum published Treatise on Adulteration of Food, in which he denounced the use of chemical additives to food. This ground breaking work marked the beginning of an awareness of need for food safety oversight. Accum was the first person to tackle the subject and to reach a wide audience through his activities. The various chapters of the book alternate between harmless forgeries such as mixing dried pea grounds in coffee, and much more dangerous contamination by truly poisonous substances. Accum explained to his readers that there was a high lead content in Spanish olive oil, caused by the lead containers used to clear the oil, and recommended using oil from other countries such as France and Italy, where this was not practiced. He warned against bright green sweets sold by itinerant merchants in the streets of London as the colour was produced with “sapgreen”, a colorant with high copper content. “Vinegar“, he explained to his readers, “was frequently mixed with sulphuric acid in order to increase its acidity.“ 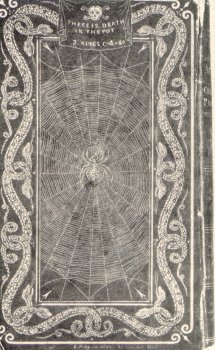 His book, controversial at the time, found a wide audience and sold well. However, it threatened established practices within the food processing industry, earning him many enemies among the London food manufactures. Accum left England after a lawsuit was brought against him. He lived out the rest of his life as a teacher at an industrial institution in Berlin.  On June 28, 1838, Friedrich Accum died at the age of 69 in Berlin