You are here: Home › printing › The very first Printed Book – The Diamond Sutra 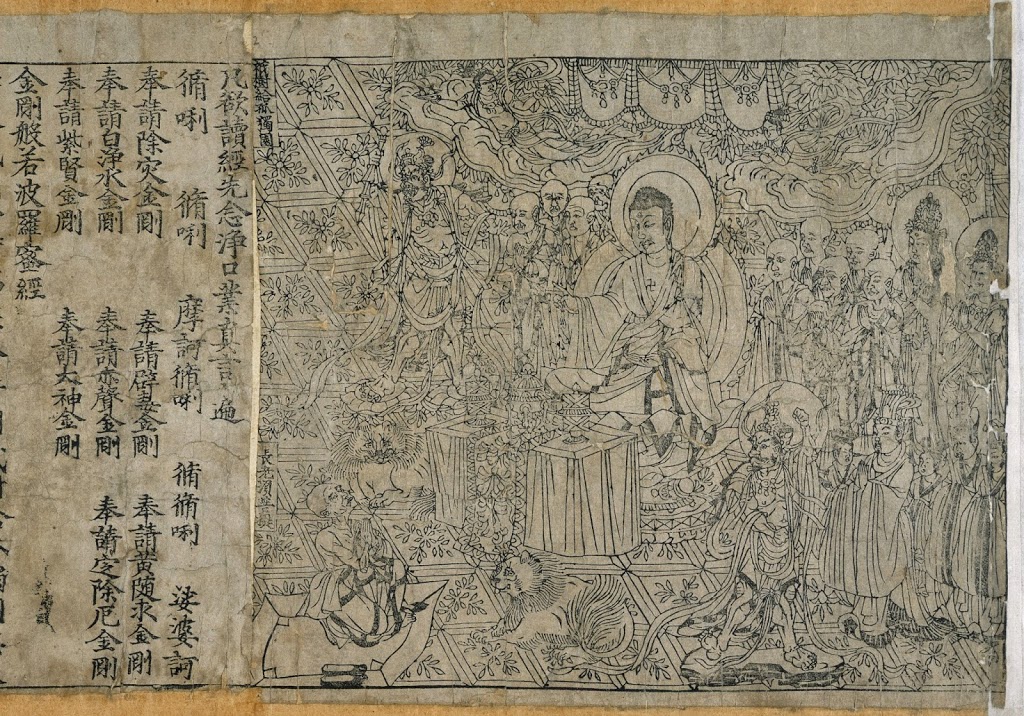 On May 11, 868, the earliest dated printed book was issued, a Chinese copy of the so-called Diamond Sutra, one of the most important textbooks of Buddhism, originally written in the 1st c. AD. You might think the it was Johannes Gutenberg who invented modern printing. But, he didn’t. Sure, printing with metal movable types including a printing press and a suitable ink, but mostover a way to produce movable types in sufficient quality and sufficient number with few effort, this was Gutenberg’s most notable invention. Printing itself existed long before Gutenberg. Especially, if you think of woodcuts or so-called woodblock printing.

Why Woodblock Prints Thrived in China

The earliest woodblock printed fragments to survive are from China and are of silk printed with flowers in three colors from the Han Dynasty (before AD 220 ). It is clear that woodblock printing developed in Asia several centuries before Europe. The Chinese were the first to use the process to print solid text, and equally that, much later, in Europe the printing of images on cloth developed into the printing of images on paper (woodcuts). It is also now established that the use in Europe of the same process to print substantial amounts of text together with images in block-books only came after the development of movable type in the 1450s. Because Chinese has a character set running into the thousands, woodblock printing suits it better than movable type to the extent that characters only need to be created as they occur in the text. Although the Chinese had invented a form of movable type with baked clay in the 11th century, and metal movable type was invented in Korea in the 13th century, woodblocks continued to be preferred owing to the formidable challenges of typesetting Chinese text with its 40,000 or more characters.

The oldest existing print done with wood-blocks is the Mugujeonggwang great Dharani sutra that is dated between AD 704 and 751. It was found at Bulguksa, South Korea in 1966. But, the print we focus today is a wood block printed copy in the British Library which, although not the earliest example of block printing, is the earliest example which bears an actual date. The book displays a great maturity of design and layout and speaks of a considerable ancestry for woodblock printing. The extant copy has the form of a scroll, about 5 meters long. The archaeologist Sir Marc Aurel Stein purchased it in 1907 in the walled-up Mogao Caves near Dunhuang in northwest China from a monk guarding the caves – known as the “Caves of the Thousand Buddhas“.[4] The colophon, at the inner end, reads:

Reverently made for universal free distribution by Wang Jie on behalf of his two parents on the 15th of the 4th moon of the 9th year of Xiantong [11 May 868].

This is more than 500 years before the Gutenberg Bible was first printed. How did the technique come to Europe and the Western world? Block-books, where both text and images are cut on a single block for a whole page, appeared in Europe in the mid-15th century. As they were almost always undated and without statement of printer or place of printing, determining their dates of printing has been an extremely difficult task. The technique of woodblock printing is found through East and Central Asia, and in the Byzantine world for cloth, and by AD 1000 examples of woodblock printing on paper appeared in Islamic Egypt. Printing onto cloth had already spread much earlier, and was common in Europe by 1300. Around the 13th century the Chinese technique of blockprinting was transmitted to Europe, soon after paper became available in Europe.[5]

The print in woodcut, later joined by engraving, quickly became an important cultural tradition for popular religious works, as well as playing cards. Although many had believed that (European) block books preceded Gutenberg’s invention of movable type in the first part of the 1450s, it now is accepted that most of the surviving block books were printed in the 1460s or later, and that the earliest surviving examples may date to about 1451. They seem to have functioned as a cheap popular alternative to the typeset book, which was still very expensive at this stage. Block books continued to be printed sporadically up through the end of the 15th century and were then more and more replaced by their movable type alternatives that have become less expensive.

BTW, in the Diamond Sutra can be found the dedication: “for universal free distribution“, so it is also the first creative work with an explicit public domain dedication