You are here: Home › art › Gabriel Dante Rossetti and the Pre-Raphaelite Brotherhood 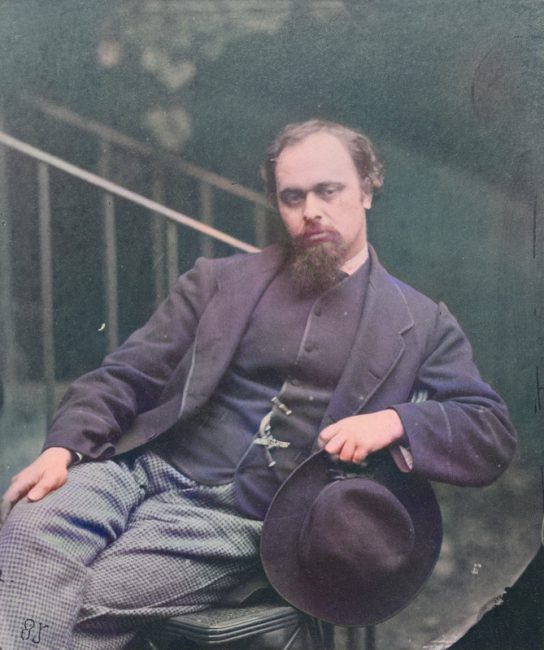 On May 12, 1828, English poet, illustrator, painter and translator Gabriel Charles Dante Rossetti, generally known as Gabriel Dante Rossetti, was born. Rossetti founded the Pre-Raphaelite Brotherhood in 1848 with William Holman Hunt and John Everett Millais. Later he became the main inspiration for a second generation of artists and writers influenced by the movement, most notably William Morris [1] and Edward Burne-Jones.

“I am not as these are, the poet saith
In youth’s pride, and the painter, among men
At bay, where never pencil comes nor pem.”
– Dante Gabriel Rossetti, Not As These in The House of Life 1870

Rossetti grew up the second of four very talented children Maria Francesca, William Michael and Christina Georgina in an extraordinary family in London, near Regent’s Park. His father, Gabriele Rossetti, who had fled Italy, was a poet and scholar. He was considered an authority on Dante Alighieri’s works [2], so it is not surprising that his son was given that name. His mother, Frances Mary Lavinia Polidori, daughter of Gaetano Polidori and sister of John Polidori, was also a teacher. Because his father was a professor at King’s College, Rossetti received a good school education as well as drawing lessons. Here his predilection for painting and drawing became apparent at an early age. In 1842, he enrolled at Cary’s Academy, which was considered a stepping stone to the Royal Academy (RA). Four years later, Rossetti became a student at the RA’s Antique School, a preparation that all students had to undergo. As at Cary’s Academy, he did not like the instruction at the RA, so he never became a student at the Royal Academy.

In March 1848, he asked Ford Madox Brown, whom he admired, to become his teacher. Although Rossetti was impressed by Brown’s literary themes, he was disappointed that Brown tried to teach him according to the old academic teaching methods. As a result, he left Brown as a student but remained a friend throughout his life. Until his 20th birthday, Rossetti was undecided whether he wanted to earn his living as a poet or as a painter. Without further ado, he sent a few poems to the renowned poet and critic Leigh Hunt. The latter praised him, but also emphasized that it was more difficult to earn money with literature than with painting. Rossetti was not lacking in ideas, but he had not yet turned in any work as a painter. He was to receive the decisive impulse through his friendship with William Holman Hunt and John Everett Millais. They lived as bohemians and all wore a knotted scarf instead of a tie.

The three could not have been more different in their natures, but they were all dismayed by the state of British art and saw it approaching decay. They expressed their rejection of the prevailing conventions in painting, which they believed had been formed by imitating Raphael [3] and his successors, by calling themselves the “Pre-Raphaelites.” Four other friends, including Rossetti’s brother William, founded the “Pre-Raphaelite Brotherhood“, or PRB for short, in 1848. These initials were therefore on The Youth of the Virgin, Rossetti’s first oil painting. It received much praise, it seemed the beginning of a great career. But when the press found out what was behind “PRB,” he and his friends were sharply attacked. Rossetti was disappointed by the harsh criticism and fell into a depression. Beginning in 1852, the PRB began to disband. During the years from 1850 to 1860, he almost completely abandoned oil painting and devoted himself to small-scale watercolors. Thanks to the critic John Ruskin, whom he met in 1854, these sold well, although he did not exhibit them.

As early as 1849 he met his future wife Elizabeth Eleanor Siddal. Lizzie corresponded to the Pre-Raphaelite ideal of women; she was Rossetti’s muse and source of inspiration throughout his life. From 1858, another woman also played a role in his life: Fanny Cornforth. She was just the opposite of the delicate, ailing Lizzie. She satisfied Rossetti’s sexual needs until his marriage in 1860. Shortly before, in 1858, he befriended two Oxford students. The following year, with them and several other young artists, he painted the Oxford University Union boardroom with scenes from Arthurian legend. A year after the wedding, Lizzie gave birth to a stillborn child and suffered a nervous breakdown. In 1862, she took her own life with an overdose of laudanum. In grief over this, Rossetti had his only manuscript of poems buried with her. 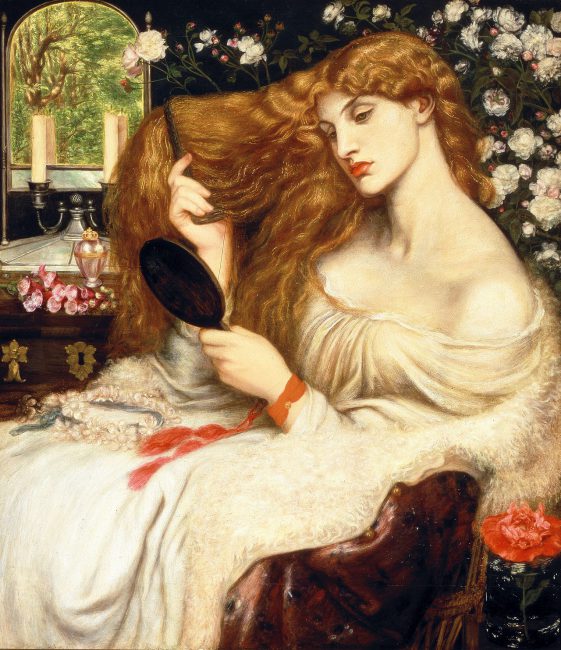 That same year Rossetti rented a large house in Chelsea, on the Thames, which he shared with Algernon Charles Swinburne, a poet, as well as temporarily with his brother William Michael Rossetti and George Meredith. He renewed his relationship with Fanny Cornforth, who posed for him, was his mistress, and took care of his household. Since his paintings sold extremely well, he was able to afford another model, Alexa Wilding. And yet another woman sat for him, albeit exclusively for the facial part: Jane Morris, the wife of Rosetti’s close friend William Morris. The years-long affair of the two took place under the eyes of William Morris, who did not want to intervene against his friend and his wife.

For his insomnia, Rosetti had begun taking chloral hydrate, the side effects of which were unknown at the time. In 1871, Rossetti swallowed a vial of laudanum – whether by accident or design – and hovered between life and death for several days. Madox Brown took him to Scotland to recuperate, where he stayed for several months. From September 1872 to 1874 he lived and worked at Kelmscott Manor, in the purchase of which he had participated. By the time he had left Kelmscott and was back in London, Rossetti’s health was not good. In 1874 the partnership of Morris, Burne-Jones, Marshall, Webb, and Faulkner with Rossetti and Madox Brown was dissolved. From then on, he rarely saw Morris. Rossetti saw this as conspiracy. Alcohol and other drugs took their toll, causing delusions and making his hands shake so that it was often impossible for him to paint. 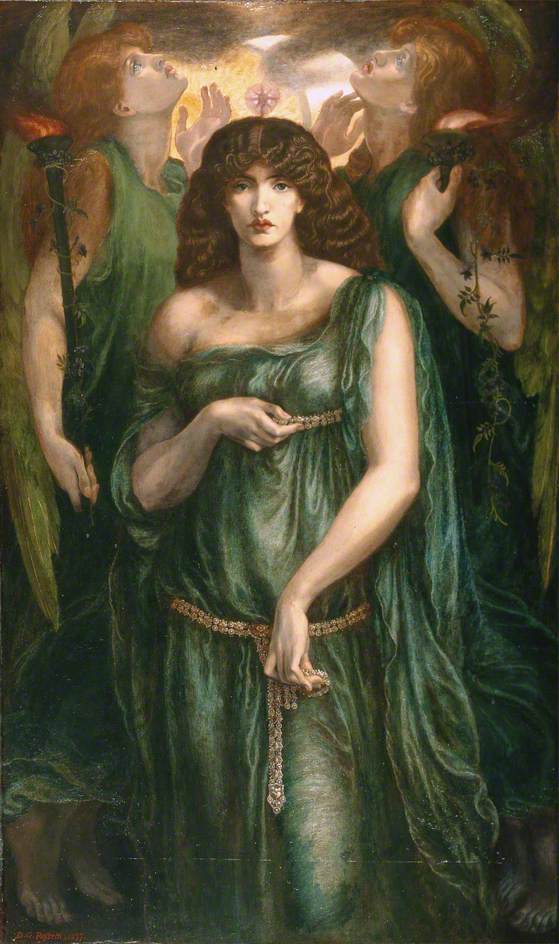 When Jane Morris discovered the extent of his chloral addiction in 1876, she broke off her relationship with him. Rossetti also changed greatly physically. He steadily gained weight, and his dark circles under his eyes gave him something sinister. Although he was a brilliant entertainer, he became more and more of an eccentric. Sick, depressed and prematurely aged, he rarely left his house. In 1881, the perpetually ailing artist suffered a stroke that resulted in paralysis of his left arm and left leg, and Rossetti ended his long-standing relationship with Fanny Cornforth. In February of the following year, he vacationed in Birchington-on-Sea. Here he died of kidney failure on Easter Sunday, April 9, 1882.

A Most Unusual Artist

Rossetti was one of the most unusual artists of the 19th century. He saw himself as a painting poet. He clearly stood out from the other comrades-in-arms of the Pre-Raphaelite movement by his outlook and his working methods: he was neither patient nor a natural talent. He was also never interested in the exact execution of details, tended to avoid complicated backgrounds, and had an aversion to landscapes. In addition, he also lacked thorough technical training. Thus, his first works (The Youth of the Virgin, The Annunciation), while ambitious, also expose his limitations in drawing and perspective. However, the expressiveness makes one forget the technical shortcomings. Unlike the other Pre-Raphaelites, he often used watercolors for his works. In this, Rossetti developed a completely unique style of painting. He often applied the colors strongly and in strokes and dots. In this way he achieved a jewel-like sparkle, which is particularly advantageous for heraldic decorations.