You are here: Home › astronomy › Cecilia Payne-Gaposchkin and the Composition of Stars 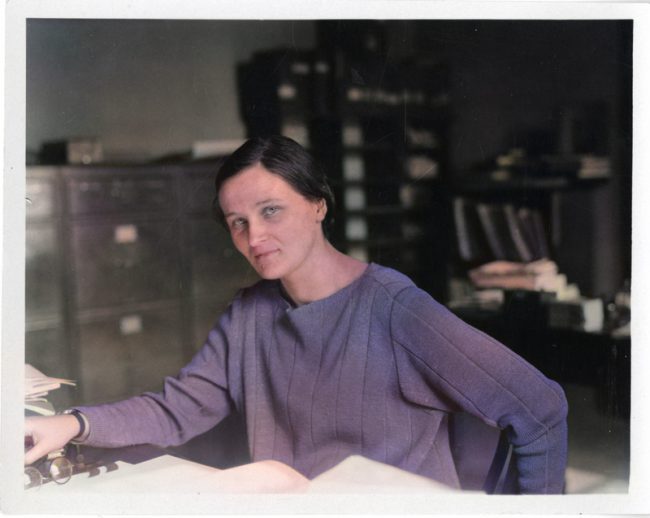 On May 10, 1900, British–American astronomer and astrophysicist Cecilia Helena Payne-Gaposchkin was born. She was the first to apply laws of atomic physics to the study of the temperature and density of stellar bodies, and the first to conclude that hydrogen and helium are the two most common elements in the universe. It was another 20 years before Payne’s original claim was confirmed, by Fred Hoyle.

Cecilia Payne-Gaposchkin earned a scholarship to Newnham College, Cambridge University at the age of 19 and studied botany, physics, and chemistry. It is believed that she attended lectures by Arthur Eddington on his 1919 expedition to the island of Principe in the Gulf of Guinea off the west coast of Africa to observe and photograph the stars near a solar eclipse as a test of Einstein’s general theory of relativity.[3] It is assumed that these lectures initiated her interest in astronomy. When she completed her studies, Cecilia Payne-Gaposchkin was not awarded a degree since Cambridge did not grant degrees to women until 1948. As she saw her career opportunities in Great Britain limited, Cecilia decided to move to the United Stated and met Harlow Shapley, the Director of the Harvard College Observatory. In 1923, she left England with the help of a fellowship which was introduced to encourage more women to study at the observatory.

The first PhD in Astronomy from Radcliffe College

Fortunately, Cecilia Payne-Gaposchkin had quite some supporters and Shapley convinced her to write a doctoral dissertation. As a result, the scientist became the first person to earn a Ph.D. in astronomy from Radcliffe College. Otto Struve and Velta Zebergs called her thesis titled Stellar Atmospheres, A Contribution to the Observational Study of High Temperature in the Reversing Layers of Stars “undoubtedly the most brilliant Ph.D. thesis ever written in astronomy”. In her dissertation, Payne-Gaposchkin managed to relate the spectral classes of stars to their actual temperatures by applying the ionization theory developed by Indian physicist Meghnad Saha. She showed that the great variation in stellar absorption lines was due to differing amounts of ionization at different temperatures, not to different amounts of elements.

The Composition of Stars

She found that silicon, carbon, and other common metals seen in the Sun’s spectrum were present in about the same relative amounts as on Earth, in agreement with the accepted belief of the time, which held that the stars had approximately the same elemental composition as the Earth. She also established that hydrogen was the overwhelming constituent of the stars, and accordingly was the most abundant element in the Universe. Often, astronomer Henry Norris Russell was given the credit for the conclusion that the composition of the Sun was predominantly hydrogen and thus very different from that of the Earth. After reviewing her thesis, Russell dissuaded her from presenting her findings on the matter, changing his mind a few years later when having derived the same result by different means and publishing it.

Emigration to the United States

Cecilia Payne-Gaposchkin became an American citizen in 1931 and met Sergei Gaposchkin at a congress in Germany in 1933. Gaposchkin fled Soviet purges and feared for his future in Nazi Germany. Cecilia Payne-Gaposchkin helped her get a visa to the United States, got her a job at Harvard, and married her in 1934. Although married, she retained her position as a researcher, which was shocking by the standards of the time.  With Sergei, she devoted herself to the study of magnitudes, especially variable stars. They studied the magnitude of over two million stars in the Milky Way and Magellanic Clouds, classifying them into existing categories and determining the evolution of stars. However, she did not obtain a permanent position at Harvard until 1938. It was only in 1956 that she received the title of professor, and became the first woman appointed head of the university’s astronomy department.

Throughout her life, Cecilia Payne-Gaposchkin was known to have inspired many women to become active in the field of science, for instance Joan Feynman, an American astrophysicist. She has made important contributions to the study of solar wind particles and fields, sun-Earth relations, and magnetospheric physics. Cecilia Helena Payne-Gaposchkin passed away on December 7, 1979.

Cecilia Payne-Gaposchkin died on December 7, 1979, in Cambridge at age 79.